Home Bizarre A Tour of the Weirdest Foods of the World – 6 Fascinating...

There are quite a few very interesting facts about some of the foods consumed around the globe. In this article that we did in collaboration with Observer Desk we will help you learn some of the most fascinating food facts from around the world!

1. Ketchup was sold as medicine

Ketchup is one of the most popular sauces in the world. Every second, 21 bottles are bought somewhere on the planet. You use it in everyday life to add flavor to your dishes. But did you know that this condiment was marketed as a medicine in the 1830s?

Ketchup was imported from the East by English sailors in the late XVII the century. It was originally a sauce made from soy, brine, or oysters, which was used as a seasoning. The English settlers imported it home and added mushrooms and shallots to improve its taste.
It was not until 1800 that industrialists added tomatoes on a massive scale.

Subsequently, Henry John Heinz, who gave his name to the famous American brand, added sugar in 1876 to soften the taste of the sauce and improve the preservation of the product.

But where does this crazy idea come from? You should know that the tomato has many nutritional advantages such as its richness in vitamin C and lycopene, a carotenoid that gives the red color to tomatoes.

This has the advantage of being a powerful anti-oxidant since it makes it possible to limit the process of free radical formation, which accelerates the aging of cells and the development of malignant cells. Therefore, it helps prevent cardiovascular disease and some cancers.

But even if the ketchup is made from tomatoes, the lycopene intake is too low and the sauce has extremely high sugar content. Therefore, ingesting a bottle of ketchup a day will do you more harm than good!

2. Raw oysters are still alive when you eat them

When we think of “living food”, oysters are often found in the front line. For good reason: when they arrive at your table, even if they have already been opened, they are still very much alive. This is also essential since this vitality is proof of the quality of the mollusk.

The oyster remains alive throughout the tasting and reacts to contact with the tip of the knife, lemon juice, or vinegar that you pour into it. A little advice from oyster farmers: chew the oyster rather than swallow it, to kill it. Otherwise, it can stay alive in the stomach for up to two and a half hours.

3. Hawaiian pizza was invented by a Canadian

Sam Panopoulos was born in Greece in 1934 in Vourvourou, Greece. At the age of 20, he immigrated to Canada, where he worked his entire life in the restaurant business.
Entrepreneur, Sam Panopoulos has run restaurants with his two brothers in Ontario. They served typical American dishes, such as burgers, fries, and Asian dishes.

In the 60s, Sam Panopoulos decided to diversify and offer pizzas on his menu, a dish in vogue in the United States at that time. And he did not lack inspiration for these recipes. One of his creations, the pineapple pizza, has even remained famous.

Before it became known to everyone that Kale is the most nutritious food on the earth and is known for multiple health benefits. However, the largest consumer of kale before the 2013 kale craze was Pizza Hut. The fact less known is that the food chain used it as decoration for their salad bars and not on their food until people realized its benefits.

Although not very many Australians consume crocodile, the fact remains that tasting the reptile is a great classic for tourists visiting the territory. A crocodile can be eaten in various ways: barbecued, stewed, marinated, or as an Asian dish like this dish presented with hot sauce.

Travelers report that the meat has the texture of turkey, and its taste is similar to that of poultry. Some say, however, that crocodile meat looks more like fish. The mystery remains intact only to taste!

Another bizarre dish from foreign cuisine called fugu in Japan, the pufferfish is deadly dangerous. Most pufferfish contain a poison, which can kill 30 people in one fell swoop and for which there is no antidote.

But that doesn’t stop people from continuing to eat pufferfish and put their lives in the hands of chefs specially trained to remove poison. Hopefully, your boss won’t have the shakes. Let’s be honest, this is an adventurous dish. Good sushi will be enough to fill you up between visits to Tokyo or before the ascent of Mount Fuji.

All these foods carry their taste and flavors from different origins. You can try them all on different occasions to have their unique taste. The best thing about these dishes is that they are all different from each other, and astonish eaters with their peculiar way of making. Although not al is cooked, some are uncooked and live such as oyster. Many people are hardcore lovers of oyster, and they ate it out without any hesitation. But some did not like them at all. Well, no doubt, oysters are beneficial for health when it comes to living foods. Nevertheless, it depends upon you how you take this food and others for your eating plate. These foods also include some life-threatening foods such as dangerous pufferfish and crocodile meat that sounds really weird, but what to say when things are already in the flow.
It absolutely sounds not great, but many eaters have shown the blend of experience with these foods as they are odd, peculiar, and very very much out of the way to usual foods. During travelling, many new dishes came out as you travelled to new places. So, take them in your tour to enjoy the taste of each origin at its peak. 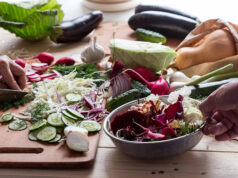 What to do with Leftover Veggies

6 Tips On How To Keep Brewed Coffee Fresh

3 THC Infused Products That Could Be Coming In 2022