You unlock this door with the key of imagination. Beyond it is another dimension. A dimension of sound. A dimension of sight. A dimension of mind… we’re sure that if you’re reading this you probably already know the rest. We here at Weirdworm have decided that it’s time for a love letter of sorts to a show that that has aged as well as a fine wine. What follows are four reasons exactly why this yearly marathon favorite remains the reigning king of sci-fi. Step aside Wookies, Cylons, Klingons and dream-thieving fugitives; we’ve just crossed over… into the Twilight Zone. Throughout its five season run, Rod Serling was the creative genius behind The Twilight Zone. To truly appreciate how the classic anthology series originated, we should also understand where Rod came from. He was actually far more than the iconic cigarette smoking man familiar to most for his charismatic monologues and stylish intros. 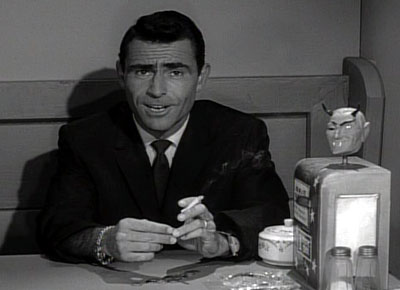 Rod had a pleasant childhood and a model “all American” upbringing. However life took its first turn for him soon after his entry into the U.S. Army. During his time as a paratrooper and a field soldier he witnessed the true horrors of war. Like many soldiers before him, Rod was traumatized by what he saw. Upon his return home, he began what turned out to be lifelong career in writing as a means of therapy. Initially, writing was simply a way for him to help cope with his nightmares and basically “get everything out of his gut” as he would say. Rod’s war-time experiences in the Philippines shaped both his political views and his writing for the rest of his life.

Like many writers, Rod began at the very bottom. He got his start in radio programming and gradually worked his way up to the world of television. Eventually, his immense talent led to an exceptionally successful stint as writer for the CBS show Playhouse 90. However, Rod was such an outspoken person for his time that his views often led to conflicts, issues of censorship and his being dubbed “the angry young man”. He was particularly vocal about touchy political and sociological issues. These interests often fueled his writing and thus left him at odds with stubborn television execs. Much like today, television heads were obligated to cater to advertisers. Rod, however, hated the constant push, push, pushing of products and cheesy ads. Regarding content, Rod felt that television had a responsibility not only to entertain but also to educate and enlighten. Predictably, very few early 1960’s television execs and sponsors were thrilled with Rod’s rebellious nature. What are we going to do with this guy?

Surprisingly, it was from this unsympathetic climate that The Twilight Zone was born. Rod, ever determined, found a brilliant loophole in the system which enabled him to express himself despite everything against him. That loophole as it turned out came in the form of science fiction. Through his seemingly innocent show featuring UFO’s, clunky robots and talking dolls, Rod managed to cleverly tackle various controversial political and social issues. 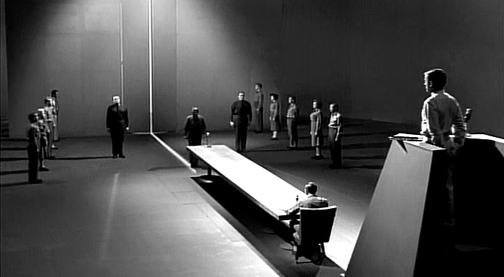 The Obsolete Man – Rod Serling: “This is not a new world: It is simply an extension of what began in the old one. It has patterned itself after every dictator who has ever planted the ripping imprint of a boot on the pages of history since the beginning of time.

Many episodes dealt with themes of totalitarianism, war, nuclear fallout and most notably prejudice which Serling felt was the most innate evil in society that all other evils grew out of. Clearly, Rod was a pioneer in the world of television who was light years ahead of his time. He paved the way for innovative and socially relevant stories to be told by whatever unconventional means necessary. Suffice to say, despite early opposition Rod got his way and in doing so created the greatest sci-fi show of all time… One needs to look no further than contemporary horror films such as the Saw Franchise, much of M. Knight Shyamalan’s work or the television show Lost to understand the power and draw of plots with twist endings and surprises along the way. A true twist ending is not just something unexpected, but also a logical dramatic device which sheds new light on previous plot elements. Ultimately, the twist imaginatively drives home a whole new subtext. The Twilight Zone famously perfected this formula. The show regularly made use of irony and subtlety so that the lessons of each episode were made crystal clear by the time Rod’s closing narration played and the credits rolled. In fact, when the show originally aired, Rod often proudly boasted onscreen about upcoming episode twists and how viewers were sure to be knocked off their seats. 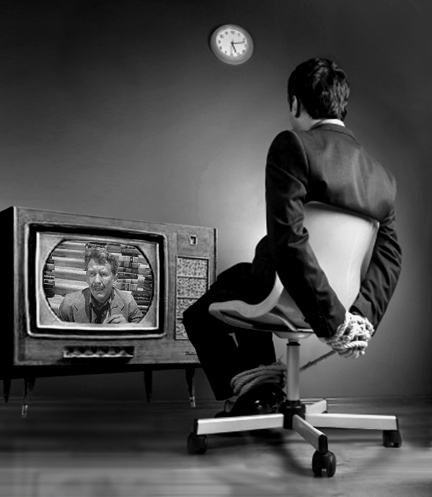 Obviously the Twilight Zone had the luxury of existing in a time long before the internet and overly informative reviews – when key twists were not in danger of being spoiled. Speaking of which, one of the more famous twist endings we’ll briefly discuss (which is likely safe considering the numerous times it’s been referenced and parodied) is the episode The Eye of the Beholder. In this episode we’re introduced via Mr. Serling to “Miss Janet Tyler, who lives in a very private world of darkness, a universe whose dimensions are the size, thickness, length of a swath of bandages that cover her face.” Basically Janet had undergone numerous treatments in a desperate attempt to look like everybody else. Throughout the episode Janet was strictly shown with her head completely bandaged and described by her doctor and nurse as “not normal”. Everyone else in the episode was also mysteriously hidden in deep shadows or off-camera until of course the moment of truth… 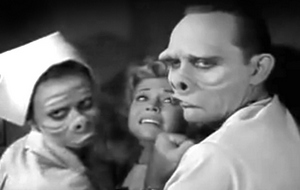 …when Janet was revealed to be beautiful and all others were shown to be pig-faced – at least by our standards.