Home Animals & Nature 5 Things Capable of Crawling up Your Toilet

We’ve all seen cartoons in which people travel through the sewers, although looking back on it, we confess we can’t come up with a reason they were ever down there. Nonetheless, through these shows, we learned that the sewer is a magical place, home to many wondrous and sometimes frightening creatures, like man-eating crocodiles, your giant pet goldfish you thought died 11 years ago, and on rare occasion a talking piece of Christmas feces.

Thankfully you knew these things were fake (at least we hope, otherwise we suggest you seek counseling if you haven’t already) and so when you sat down on the toilet, you were able to do your business in comfort. Well, those days of safety are over. Be forewarned – after reading about these animals, you’ll never be able to c**p in comfort again.

We don’t have anything against frogs for the most part. They’re pretty cool looking, and apart from plagues, they don’t really bug humans. Except when they stop by to say “hi” while we’re in the bathroom. Frogs love damp places; being amphibians, they have to live near water due to the early stages of their lives. It just so happens that sewers and plumbing pipes, unfortunately, fall under the category of “damp.” Frogs have been known to come up through the toilet in various areas of the world, including Australia, Cuba, Puerto Rico, and other tropical regions.

The United States is far from exempt, however. An invasion of Cuban Tree Frogs started about 3 years ago, and shows no signs of slowing down; the frogs have already made their homes in Georgia, South Carolina, California, and even Hawaii and Canada. In Florida, the problem is so bad that the frogs have caused numerous power failures. But nobody seems to care about the power outages, because these guys have a nasty habit of making their homes in plumbing fixtures and surprising you when you really wouldn’t care to be surprised. 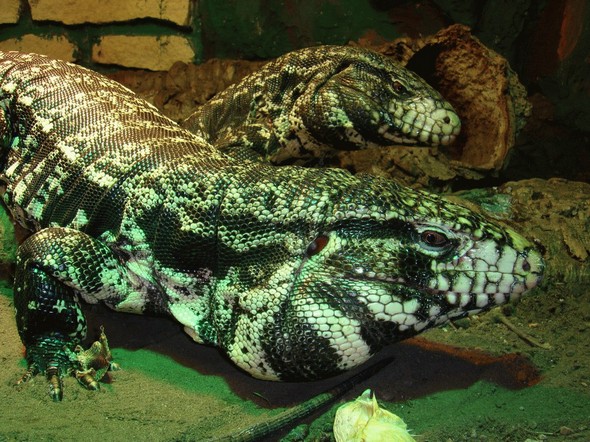 Lizards, like frogs, enjoy water. In recently urbanized areas, they will, therefore, go wherever they can find a source of constant water (i.e. your house). And because most are insectivores, they will go wherever they can find crickets and the like (i.e. your house again). And where insects and water coexist? Well, if you have a cleanliness problem, your bathroom. In many areas like the southwest United States, lizards coming through the plumbing into toilets is a fairly common, albeit uncomfortable happening. But since they are insectivores, we have nothing to worry about when they show up.

Except when the lizard coming up likes to eat your flesh. A few years ago, a three-year-old Norwegian boy was running into the bathroom of his house with his mommy, presumably to show her that he was a big boy now. But as she helped him lift up the toilet seat, the two were greeted by a large black and yellow Teju, a South American carnivorous lizard.

Luckily the mother was with the child because if he had sat down on the toilet, the giant lizard would have almost certainly bitten him. This proves that any lizard has the capability of coming up with the toilet as long as it can fit in the pipes. To add to your fear, the Teju is so dangerous, it’s illegal to own one as a pet in numerous countries. 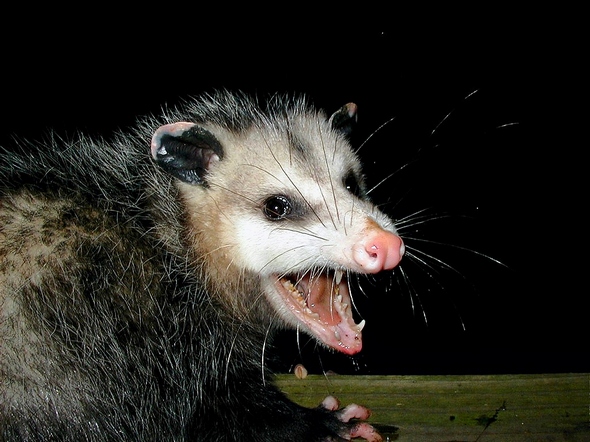 Let’s get away from the cold-blooded animals for a bit, shall we? Our next entry was one you didn’t even know could swim through pipes or breathe underwater, but nonetheless, possums manage to find their way through our s-bends every once in a while.

More specifically, baby possums, probably the least threatening animal on our list; fully grown ones probably couldn’t fit through the pipes. Either that or they aren’t as brain-dead as their offspring. There have been numerous cases around the world of possums making their way through plumbing fixtures and into houses, also the reason for this is probably more accidental than anything, as possums usually stay away from humans. A man living near Dallas, Texas walked into his bathroom one day to find a small possum staring at him from the toilet bowl, wet and out of breath (he had to have traveled at least 50 feet through water-filled pipes).

Probable cuteness aside, the man slammed the lid on the little demon and waited for animal control to arrive. But that wasn’t nearly as shocking the possums that showed up in Brisbane, Australia. Mr. Tim Fraser was in his bathroom when his toilet started bubbling, giving birth to a small bush-tailed possum. Fraser, who was more of a man than the aforementioned, quickly rescued the animal from the toilet, presumably after he got over his heart attack.

Of course, this sort of thing would freak out anyone, and the wife of the first man told her husband that he better keep all of the toilet lids down from now on. Frankly, we think that’s stupid advice ma’am because then there would be no way to know when they would attack next.