You might be wondering; how do we know these ten hot sauces are the scariest ever produced? We’re glad you asked! We use the Scoville scale.

The Scoville scale measures how hot something is. To give you an example of how it ranks, the humble jalapeno and the ever popular Tabasco rank somewhere between 2,500 and 8,000 Scoville units, depending on the strength and the flavor. This gives us a handy scale for measuring just how scary this stuff is, as Tabasco is too hot for most people in the first place. And Tabasco doesn’t even have a prayer of making it onto this list, no offense to the fine people of the McIlhenny corporation, but when it comes to heat, you’ve been beaten out.

Yes, thanks to Scoville, this list starts out plenty scary and just… gets… worse. 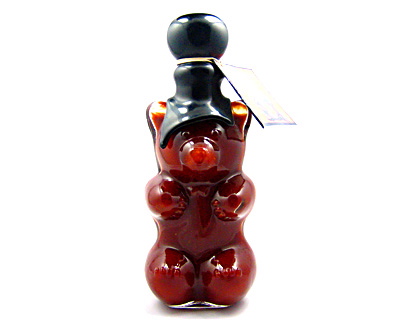 Don’t be fooled by the cuddly little bottle or the cute pun contained in the name: this hot sauce is packing 750,000 Scoville units. In other words, it’s about ten times as hot as Tabasco sauce. We’re not really sure why, precisely, it comes in a teddy bear bottle, except perhaps that the company that makes it has an extremely well-developed and rich sense of bad puns. And yet, it’s the minor leagues when it comes to this list. 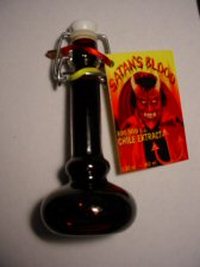 We’ll give the manufacturers of Satan’s Blood credit for responsible business practices. Not only does the name adequately convey that this is one heck of a strong hot sauce, it also comes in a little tiny bottle. Although, at 800,000 Scoville units, you don’t really need a lot. In fact, you probably don’t need any, but that’s never stopped the adventurous, or the foolish. Blaspheme away! 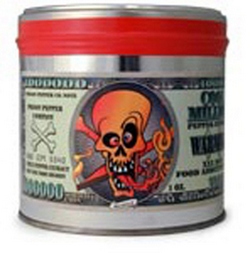 This has to be the absolute worst case of misleading advertising that we’ve ever seen, and we research weird advertising all the time. There isn’t a thing remotely cool about this stuff. The Cool Million is a pepper extract designed to be, well, a million Scoville units. Yes, you read this correctly. The third entry on this list has crossed a million.

We’re pretty sure that at this point, any pretence that this is about flavoring the food has pretty much been put by the wayside. This is purely about how well you can torture yourself. It’s a matter of chest pounding honor, at a million Scoville units. But, of course, it can get much, much worse.

How much worse can it get? Read on!

This is 1.5 million Scoville units. We’re just going to let that sink in for a minute. Now consider that this sauce actually comes in the surprising responsible packaging of an eye dropper to keep people from just slathering it on like a bunch of idiots. This is a brilliant idea, actually. An eye dropper stops to make people think about balance, and how much to add to the mix. Makes it almost medical.

Or, if they’re stupid, they think about putting it in their eyes. In fact, we’ll lay down money that it’s actually happened.

A product has to be daring to call itself “pure evil”, even from a company that calls itself Screamin’ Demon. Demon Ichor makes a respectable run at the title with a heat of two million Scoville units. This stuff is so strong they actually advise keeping it away from children. We suggest just the opposite. Children should play with this stuff. It’s never too early for them to learn what chemically induced pain is, or that their parents are the kind of people who actually consume stuff like this. Builds character!