The list of weird song covers is nearly bottomless. For every tune, there’s a musician who should never perform it under any circumstances. And thanks to an absentee God, that musician is practically guaranteed to choose that song to slather with “their own flavor”. Generally, the worst offenders are part of a longstanding musical war wherein a pop act murders a metal classic, or a metal act murders a pop classic. We thought we’d split the difference, and give you a little of both.

So, did you know Pat Boone actually put out an entire album of jazz covers of metal songs? That’s the kind of fact that has never been greeted by anything better than silence and the slow uncorking of a bottle of Jack Daniels. There are a lot of gems on the set, but this, for our money, is both the strangest and the one that works the best. Boone, for those unfamiliar, was absolutely insanely popular in the ’60s, and your grandma probably owns all of his albums except for this one. He is one of the most important figures in the entire history of white people thoroughly ripping off black culture. He was so popular, he got beaten up by Superman: 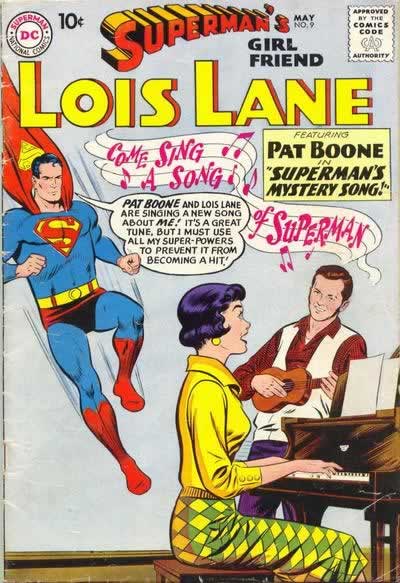 Boosh! Take that you talentless crooner!

But all things must pass, and Boone eventually had to fall to harder, grittier artists like the Osmonds and the BeeGees. Boone, well past the point of being a teen heartthrob, decided he could finally have a sense of humor and put out a metal album. When asked what his fans would think, Boone replied “All my fans are dead!” Not us, Pat. Not us.

“Louie Louie” – Sadly, Way Too Many

“Louie Louie” is a classic rock song because nobody can understand the lyrics, so everybody thought it was about sex. So, inevitably, rock bands were attracted to it, along with pretty much everybody else. And when we say “everybody else”, we mean thrash metal gods Motorhead:

The highly organized nerds of the University of Washington Marching Band:

Even classic punk rockers The Clash:

Supposedly, even the Mormon Tabernacle Choir has tackled “Louie Louie”. Which makes us wonder how long it’ll be before we hear it on Hannah Montana. And by hear it, we mean have it imposed on our eardrums by every audio media available.

Britney Spears is pretty weird these days. She’s a schizoid redneck whose actions have actually be ridiculous enough that her fat, alimony collecting ex-husband was declared a better parent by the courts. Do you remember K-Fed? We wish we didn’t, too. Her entire life is a trainwreck, but that’s nothing next to her musical career. 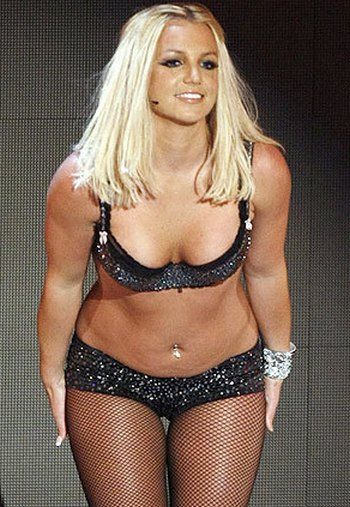 The main reason this cover makes the list is that Spears DOESN’T love rock and roll. She’s a pop tart, not a rocker. We’re pretty sure she thinks the Flying V is something a stripper does to get on her pole. Plus, it’s sung by the complete opposite of Spears in just about every respect, noted rocker and excessively coy lesbian Joan Jett. If that voice quiver thing has never annoyed you before, get ready to reach a new level of hate.

“These Boots Are Made For Walking” – Crispin Glover

You probably know Crispin Glover best as Marty McFly’s dad in “Back To The Future”. What you may not know is that not only is he every bit as weird and terrifying as his career would indicate, he’s also put out several albums and is a respected musician, mostly because of his ability to turn innocuous pop songs into pure nightmare fuel.

Take his cover of Nancy Sinatra’s semi-feminist anthem “These Boots Are Made For Walking”. Glover’s cover strategy seems to be to pretty much imitate the music perfectly…and then sing the lyrics as if he’s having a massive emotional breakdown. But lest you think that he lacks all musical talent (or his ability to make bland pop excessively disturbing is an isolated incident), here’s his cover of Michael Jackson’s “Ben”, recorded for the remake of “Willard”:

Yes, Crispin Glover is singing a love song to a rat. Yes, this list gets weirder.

So, you’re asking, who the heck is Caetano Velloso? Well, he’s Brazil’s answer to Bob Dylan. He also has, if this video is any indication, an incredibly well-developed sense of humor.

That was, in fact, Michael Jackson’s “Billie Jean”, done Brazilian folk style. What’s really weird about this one is how the laid back Central American jazz style actually works pretty well with His Badness’s lyrics and composition.

Of course, we can’t REALLY say the same for his version of “Come As You Are”, but they can’t all be hits: