If I’ve learned anything from comedy, it’s to start with your best foot forward. In this case, my best foot is actually a Russian mystic’s magical wang.

Known as a wacky magician who managed to directly influence Tsar Nicholas the Second, Rasputin is also the the textbook definition of a sexual deviant, as every photograph ever taken of him can attest to. 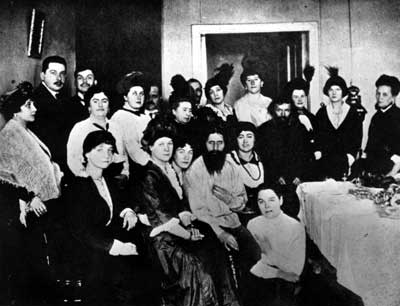 It’s like Where’s Waldo, but with an alleged rapist.

Despite being a self-described monk, Rasputin was notorious for his various sexcapades. Many accounts show him as a womanizer with some contesting that he used his alleged supernatural abilities to seduce his targets. By the time of his brutal assassination in 1916 he was widely known as the wizard of boning. Naturally, his assassins would want a unique keepsake from their kill. That is to say, they took his penis. Sadly, all that glitters is not gold, as Wikipedia helpfully explains:

In another recounting of Rasputin’s assassination, his member is described as “notorious in Petrograd”, but “disappointingly, the conspirators apparently found [the dead] Rasputin’s penis of ordinary size and character.”

That’s right; the men who killed Rasputin were disappointed that he wasn’t hung like a horse.

Since his death, several people have claimed to own the fabled penis of lore. Supposedly it resides in a jar at an erotica museum in St. Petersberg, and according to museum director Igor Knyazkin, simply glancing at the appendage can cure impotency. Whether or not that’s true (tip: it isn’t), Rasputin’s severed penis remains as the mystic’s creepy, pickled legacy.

What happens when the world loses a great genius? Why, we crack his skull like an eggshell and scoop out the brain, of course! After performing Einstein’s autopsy, Thomas Harvey photographed and weighed the brain before deciding to further study the brain on his own. On one hand, he’s got the right idea: Einstein’s intellect was certainly something else, which may have been the result of unique brain development. On the other hand, he may have gotten a little carried away with the “genius organ” thing when he gave Einstein’s eyeballs to a colleague of his. Said the colleague, “Ew.”

Eventually Harvey lost his job at Princeton Hospital for keeping the brain, but that did little to stop his research. Starting with photographs and going to far as to slice pieces of the brain, Harvey discovered several areas of the brain, such as the parietal lobe and Sylvian fissure, had grown larger than normal, while other sections of the brain were absent. The general consensus is that these factors allowed the brain’s neurons to communicate differently and for Einstein to think in a visual way. Content with what he had done, Harvey decided to call it a day and stashed the brain bits away in his home for another twenty years because, you know, that’s just what you do with a human brain. 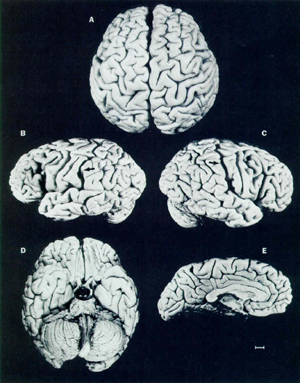 For many years scientist have theorized that different rates of growth in the brain create enhanced skills and abilities. While the study of Einstein’s brain is far from confirming this as true, it does lend more credence to the theory. It also gives us a legitimate reason to rob the dead of their thought goo, something grave robbers and crooked coroners have been fishing for since the dawn of man. Everyone wins!