Home Home The Mystery of the Nazca Lines

If the enormous success of TV’s Lost proved anything, it’s that the general public loves a good mystery (if it proved anything else, it’s that in the world of television, there is absolutely no such thing as a satisfying series finale). We are constantly drawn towards puzzling questions and enigmas, on one hand desperate for answers, on the other hand, reluctant to know them, as the answers may fail to live up to our own imaginations. Sadly for viewers, Lost is no more, but that’s not to say that there are no mysteries out there to obsess over. As it turns out, our world is full of bizarre places that defy conventional explanations. Such is the case with the Nazca Lines.

Located in the Nazca Desert of Peru, the Nazca Lines are a series of large images on the desert floor, the largest of them measuring up to 660 feet across. Although some of the designs are unfamiliar, probably bearing some greater significance to the culture that created them but remaining predominantly indecipherable to modern archaeologists, others are strikingly recognizable to people of the modern world. Among the strange patterns and puzzling geometric shapes, there are massive depictions of spiders, monkeys, birds, and even, it appears, people. 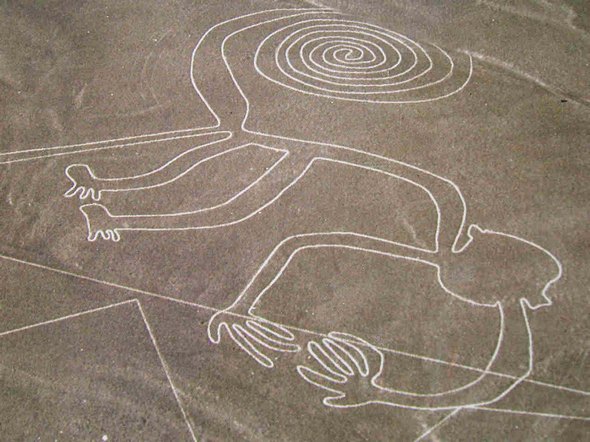 Experts are uncertain as to exactly when the lines were created, but the general consensus places their origin at sometime between 400 and 650 AD. However, those who have studied this mystery and spent years trying to understand it are less concerned with the question of when the lines were produced, and are instead far more interested in the questions of why and how.

First of all, let’s address the why. With centuries separating our culture from that of the Nazca people, even the most dedicated and skilled archaeologists and anthropologists face an enormous challenge when attempting to deduce just what purpose the lines served. As with Stonehenge and the Mayan Temples, it is a common trend among scholars studying such images and structures to associate them with archaic practices of astronomy, suggesting that perhaps these ancient sites served as some kind of observatory or star map. 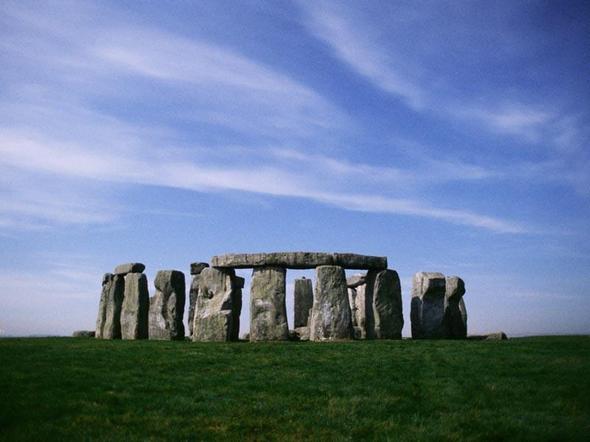 Clearly, this is just the remnants of an ancient Astronomy Club meeting.

On the other hand, theorists also tend to place a great deal of stress on the religious lives of the cultures who produced these mysterious finds, proposing that perhaps they served a spiritual purpose. Several experts who have studied the Nazca Lines wonder if perhaps they were a tribute to a deity; a series of images carved into the desert floor, large enough to be seen by the gods in the sky.

And that suggestion brings us the next question: how did these people create the lines? True, teams of archaeologists have been able to study the Nazca culture and conclude that they used simple tools to remove the first layer of the desert floor, allowing them to expose the next layer, whose differing color contrasts so greatly with the surrounding desert that it is clearly visible even from far away. However, what continues to puzzle people to this day is the fact that the images themselves can only be discerned from the sky.

For example, if one were to stand beside the Nazca Line that resembles a spider, at ground level it appears to be nothing more than a series of lines. It is only from an aerial view that the true, intended form is revealed. That’s all well and good to modern man, who has access to planes, helicopters, and so forth, but we must remember that these lines were crafted over a millennium years ago, long before any form of air travel had ever been invented. Given the perfection of some of the forms, it baffles the mind to consider how this culture, with no access to the technology that would allow them to determine if they were creating images that even slightly resembled what they were trying to depict, could design not just one of these massive works of art, but indeed several.

In an attempt to provide the closest thing to a mundane, down-to-earth (so to speak) explanation of this phenomena, one researcher suggested that perhaps the Nazca people were able to design a rudimentary form of hot air balloon technology, which would allow them to periodically take trips above the surface of the desert and survey their progress. However, not only would this clearly have been a tedious and often inaccurate process for those involved in the construction of the lines, it has largely been dismissed by most experts who agree that there is no solid evidence to indicate that the culture which produced the Nazca lines had access to hot-air balloon technology. With the majority of conventional thinkers left shrugging their shoulders and tossing out theories like a drunken college student throwing darts at a dartboard, the floodgates were opened for some, shall we say, “fringe” proposals on the subject. Among the more interesting theories is that the Nazca people had contact with extra-terrestrials, and created the lines in conjunction with their otherworldly friends to serve as a sort of inter-planetary landing strip. Quite frankly, we hope that’s not the case, because any alien culture that designs their spaceships to look like giant spiders can’t possibly be benevolent.

Others have gone so far as to say that the Nazca culture had nothing to do with it at all, and the alien beings created them all on their own. First of all, some people have obviously been giving the aliens too much credit, suggesting that they are responsible for everything from the Pyramids to very existence of life on Earth in the first place. Second of all, if aliens did indeed draw the Nazca lines, well, based on their depiction of a human being, we can only conclude that the particular beings responsible were a group of alien second-graders on a field trip. “That’s real good, E.T. We’ll put that up right there in the desert with all the other drawings.”

Seriously, when one considers all the ways this mystery could go, we doubt it will be too long before someone comes forward with “scientific proof” that our world is actually one gigantic Etch-A-Sketch, and the Nazca Lines are the evidence of this.

As it is, there is currently little consensus as to exactly how or why these lines were created. Still, they have fueled the imaginations of individuals for years now, working their way into our shared cultural consciousness and popping up in all sorts of media. Recently, the Nazca Lines were featured in a scene from the movie Indiana Jones and the Kingdom of the Crystal Skull, a film which revolved around a plot involving strange alien beings who played a hand in the shaping of the ancient world. They commonly appear in supernatural and paranormal television shows, having been featured on such programs as Unsolved Mysteries. The internet is home to scores of sites dedicated entirely to the discussion of this phenomenon, where everyone from well-trained experts to insomniac UFO buffs can weigh in with their own personal interpretations.

Join the discussion by posting in the comments below! Written by Joseph Oliveto – Copyrighted © www.weirdworm.com Image Sources