Home Misc The Five Worst Fathers in the Bible

One of the 10 commandments is people should obey their mother and father. However, that is sometimes hard to do when your father should have his own special on the Lifetime network. The Bible is full of reverent characters, and while many of them are good servants of God, they are by no means, a good father.

5. Lot gave up his daughters to get raped to spare his two guests

In the cities of Sodom and Gemorrah, the citizens were all ungodly people who were apparently fond of sodomy and Gomorrah. That is why God destroyed the city and turned everyone into salt (God is pretty inventive when it comes to murder).

As well as naming crimes for which murder is the suitable punishment.

The only good man in the entire lot was Lot. He was loyal to God and kind to everyone. In fact, it was in his kindness and desire to give good hospitality to his two guests that he willingly gave up his two virgin daughters to an angry mob of people to get raped.

This was in Sodom, a place where it is a safe bet to say sodomy was a popular practice. Could he have given them up to a worse crowd? It is like an animal shelter giving away one of their dogs to Michael Vick.

However, he did do this to spare his two guests from a similar fate, and it turned out those two people were angels, and angels come before one’s own flesh and blood.

Even more so when the angels are perfectly disguised as common vagrants.

It turned out though, that Lot’s daughters were not raped, because the crowd was way more interested with the male strangers. So, no wrongs were made. Except, Lot later got drunk and was tricked into having sex with his daughters. Probably made father’s day even more awkward. 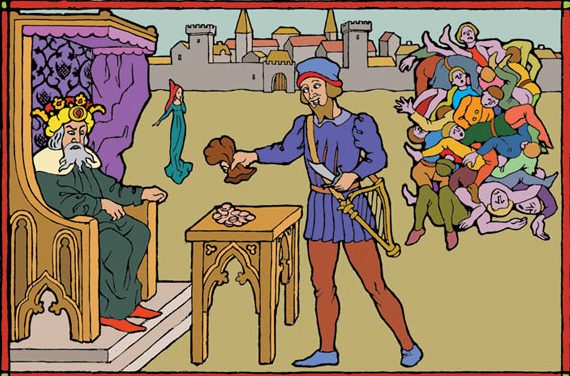 The story of David and Goliath is one of the most famous stories of the Bible, and is one of the reasons why David is such a revered figure. There’s actually something else Davy-boy got up to that earned him some notoriety, but you might not have heard of it. In fact, it smacks of more of the actions of Jeffrey Dahmer than God’s chosen prophet.

It begins when Saul was stuck on the losing side in the Philistine war. Saul was a good man and a good king who God chose to help by having Samuel go and counsel him. Obviously unwilling to disappoint God, Saul was a bit desperate to win. So he offered a little incentive. He agreed to sell his daughter to whoever could bring him 100 Philistine foreskins.

This would be pretty bad if foreskin was some kind of currency and he was selling his daughter, which would be weird and immoral, but he just wanted to wipe out a bunch of Philistines. In the large picture, 100 soldiers doesn’t seem like a way to win the war, but if he was seeking a way to demoralize the Philistines by acting like the scalping Apaches, only with dicks, then it was a pretty solid plan.

In the end, David won the prize by acting like a foreskin-obsessed version of Brad Pitt from Inglorious Basterds. David gave Saul 200 foreskins, instead of the requested 100 and won the prize of a human female. And that is the story of David, the famous prophet and the closest thing Judaism found to Jesus Christ.

3. Noah curses his son’s son because his son saw him naked 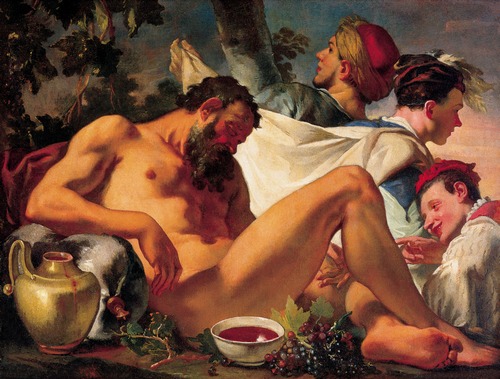 People don’t need to be religious to have heard of Noah. Hell, if you are a Christian and the only people you recognize from the Bible are God, Jesus, and Noah you can lay back and contemplate what color unicorn you want when you get to heaven. During a time in history where the people of Earth were so horrible, God realized the only solution was to wipe them all out and start anew.

And wipe out everyone he did, except for Noah, who was described as “just” and “righteous” and the only person on Earth worthy of God’s mercy. So, along came the flood…yadda yadda…2 of every animal and there we are, God starts fresh with a couple animals and Noah and his very large family.

The world was new and Noah was bored. So he decided to drink wine, get drunk and fall asleep naked. It was at this time that Noah’s son, Ham, saw his father naked and decided to tell his two other brothers. Noah found out and was apparently embarrassed as well as anyone should, because no one can look that good at 600 except Joan Rivers.

As a result, Noah was in the mood for some retribution. And it was going to be biblical. However, in some sick twist of psychological trauma he didn’t harm Ham. Cursing his son would apparently not pass on the message well enough that he was pissed at his son, so he instead cursed his son’s son, Canaan.

The curse went that Canaan and his people would forever be slaves to Noah’s other two sons, and it you know the history of the Canaanites, this was not a mere threat.

2. Caleb offers his daughter to whoever could wipe out a city

No matter the religion, women always seem to get the short straw. The same is true in the Old Testament where women seem to be treated as more of a bargaining chip rather than human. In Islam, Judaism and Christianity’s defense (that sounds familiar), women seem to have a pretty good price as Caleb, who was engaged in another battle in the long string of battles that made up history, agreed to give his daughter to whomever could wipe out the city of Kirjath-sepher.

Yes, Caleb agreed to give away his daughter, Achsah, to someone with the destructive tendency capable of wiping out an entire city. That will definitely ensure that person will be a kind and caring husband with no tendency of violence.

Well, that person turned out to be Caleb’s brother, Othniel, so the girl he won by winning the game of genocide was his own niece. Caleb didn’t seem to realize that incest and murder were not good building blocks that created a healthy marriage.

1. Jephthah killed his daughter due to a ridiculous promise to God

Jephthah was a valiant warrior and was very faithful to God, and loyalty and being really good at killing people are some top qualities that God looks for during times of war. Jephthah also meant, “He opens”, which really makes a lot of sense as he seemed to lack the common sense to keep his mouth shut.

Hoping for another victory notch on his belt, Jephthah made a vow to God that he would kill and sacrifice to him the first person that would come to greet him from his victory. Apparently God was appeased by the idea of human sacrifice, as Jephthah won his battle and went home. As anyone could’ve predicted, when you go home after battle, there is a good probability that your family is going to greet you, happy to see you alive.

This was the exact case when his daughter came to say hello and congratulate him. To be fair, Jephthah was pretty upset at the idea of killing his daughter, but it didn’t stop him from doing it. It didn’t even convince him to ask God, “Hey, do you think that victory is enough for you, because I really don’t want to kill my daughter.”

However, Jephthah’s daughter was actually cool with the idea of being killed to settle a promise. Does that make it better? No, no probably not.