As long as man has been able to mix together chemicals, he’s been blowing the heck out of anything that moves. About seventy years ago, he hit the apotheosis of “blowing the heck out of stuff” power: the nuclear bomb. But apparently dropping it from planes wasn’t enough. Oh no, we had to put that kind of power into backpacks, stick it in grenade launchers, and fire it out of cannons. Here are five weapons that prove that not only was the Cold War pointless, both sides were completely insane. 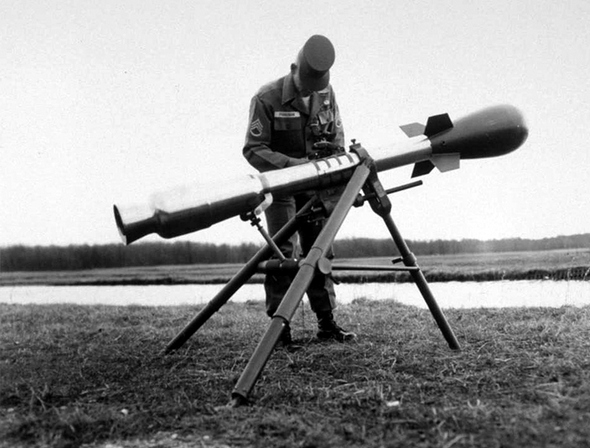 No, we’re not referring to the King of the Wild Frontier. We’re talking about a nuclear weapon you could issue to soldiers, you know, for when they were out fighting. If this sounds insane, that’s because it is. But that didn’t stop anybody from putting together the Davy Crockett.

The entire idea was instead of dropping huge bombs from airplanes onto unsuspecting enemies, in this case the Russians, you could issue the infantry with their own personal nukes, mounted on a recoilless rifle, and let them irradiate the other side while fighting. Because, of course, there was absolutely no way the infantry (the guys getting shot at a lot and having to make spur of the moment decisions) would ever misuse what amounts to a nuclear grenade launcher.

The really insane thing about the Davy Crockett was the terrible design. Recoilless rifles have all the accuracy of a drunk urinating, so the Davy had to be designed to be pointed at something’s general direction and launched; it’d wipe out anything within a mile radius of where it landed and had a three mile maximum range. And, this being the ‘50s, it wasn’t a clean bomb, either. No, the Davy was just as radiation-heavy as any other nuclear weapon, so basically the only way to shoot it safely was to be downwind and hope the other side was three miles away.

Thankfully, somebody in the Army was actually sane and this was never actually used in combat. Just deployed… in places like Vietnam. 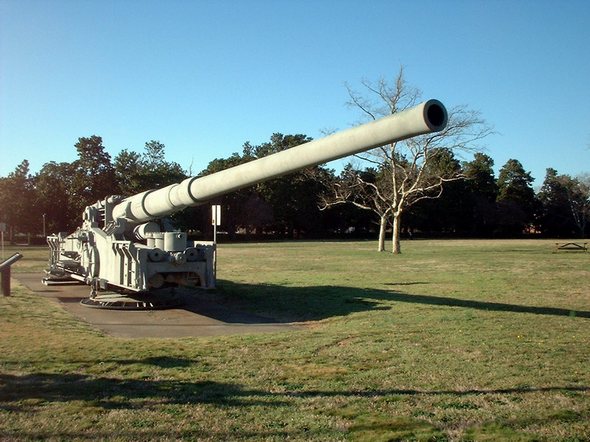 The Army was confronted with this newfangled “atomic bomb” back in the ‘50s, and they weren’t sure how to use it. They knew they wanted one, because every military man deeply loves munitions that can blow the living hell out of absolutely everything. But they just weren’t sure how to work it into the Army’s usual repertoire of rifles, cannons, and their conventional stuff that goes boom. Luckily, somebody was there with the single most terrifying “solution” to a “problem” you’ll hear all day.

Atomic Annie, aka the M63, was an enormous cannon that fired nuclear bombs. Yes, you read that correctly. It fired nuclear bombs. Why? Because why the hell not? This is the military, d*#n it, guns that shoot bombs are like peanut butter that magically creates chocolate in your mouth. Never mind that combining gunpowder with a nuclear bomb sounds more dangerous than letting Gary Busey outside without the shock collar, let’s go full steam ahead!

What’s really unnerving is that Atomic Annie is simply the biggest of their ridiculous cannons. The Army had plenty of options for using weapons that had “THIS WILL GO TERRIBLY WRONG” practically stenciled onto the crates, from teeny little cannons to big honking guns designed to be used as standard artillery, except with radioactive death. Granted, the Russians were just as stupid and slamming out nuke cannons as fast as the collective would allow, but first of all, they were just following the US’s lead and secondly, it was Soviet Russia. Buying a blender from them is fraught with risk, forget buying any munitions that aren’t the AK-47. We expect a little more from the Land of the Free and the Home of the Brave, like not putting nuclear weapons into cannons. 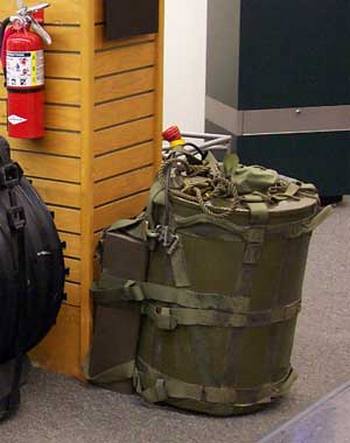 OK, enough about launching nukes out of cannons and on the end of rifles. Let’s talk about something that’s even more stupid: making nukes into time bombs and expecting some poor shmuck to lug them around on his back.

The MK-54 SADM is better known as a “suitcase nuke” or a “backpack nuke”, but is better described as “the world’s most destructive time bomb”. The idea was, if a soldier on the field ran into a situation where, somehow, turning the entire field into a parking lot made sense, he could sling this thing off his back, set the timer, and run as fast as possible in the opposite direction, preferably towards something like a helicopter or a spaceship, desperately hoping he’d set the timer just long enough for him to get out of the blast range, or at least that he was downwind. If not, well, he was kind of up the creek.

There were a lot of problems with this idea, beyond the fact that it was insane. For one thing, nuclear weapons, no matter how tiny they are, are not exactly light; these things weighed fifty pounds or more, which made the term “suitcase” kind of a misnomer. Basically, the soldier carrying this thing had to haul that, his pack, and a gun to actually defend himself in a sane manner. Secondly, atomic bombs are fragile things, and so are bomb timers, so humping a big old bag of death across a couple of mountain ranges didn’t make a lot of sense. Luckily, we never got the chance to find out.