Home Home The Five Most Brutal Deaths in the Bible

It’s common knowledge that Jesus was a bit of a softy, pushing his peace and love agenda until his death and well after his foray into zombie-ism, but people tend to forget that His father operated on an absurdly short temper. God’s Old Testament policy can be summed up succinctly with “talk shit, get hit.” What follows are five of the most brutal deaths you’ll find in the Bible.

The Who: As far as biblical douche bags go, Eglon’s name isn’t exactly memorable. He wasn’t quite a power player, but the dude was still a dick: during the time of the Judges he suppressed the people of Israel because hey, why not? He was also a bit of a glutton, which while not always the ear mark of a tyrant, it is still a sin, so we’ll stack that against him, too.

The Death: Jolly Old Eglon was approached by Judge Ehud, who claimed to have a very important message for the king. Eglon sent all of his aides away. Ehud then uttered the most bad-ass line in the entire Bible, “I have a message from God for you,” and stabbed Eglon right in the stomach. The grievous wound combined with his Fat Albert physique lead to the dagger being swallowed by his girth. Depending on which translation you’re reading, excrement also leaked out of the wound, so there you go. 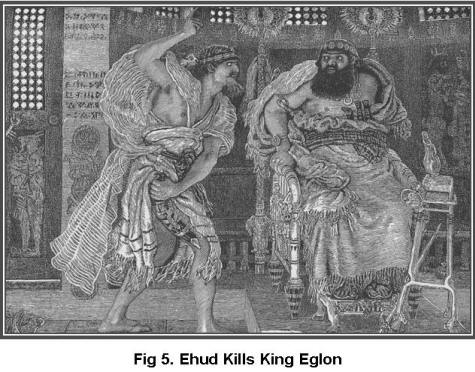 A case of the Mondays.

Ehud escaped and locked all the doors. When Eglon’s aides returned they assumed that their king was relieving himself and waited to enter. Finally, unable to wait any longer, they broke in and found their king a bloated, bleeding, unpleasantly feces-soaked corpse.

Samson is pretty much the Old Testament equivalent to the Incredible Hulk. Though born during a time when God was punishing the Israelites by having them live under the rule of the Philistines, Samson was blessed with unparalleled strength so he could brutally slay the captors of his people and return them to God. Throughout his narrative he’s prone to fits of anger that leave thousands of people corpsed. To put it bluntly, Samson was metal. 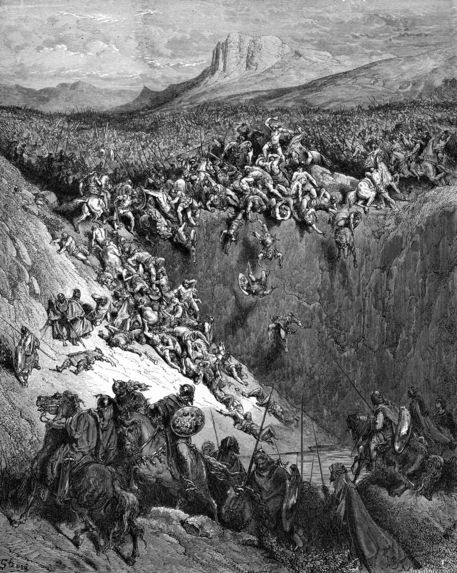 Seriously, he killed one-thousand people with the jawbone of a donkey. THAT’S NOT EVEN A WEAPON.

The catch to Samson’s fists of fury was that he wouldn’t cut his hair. Naturally, that had to happen; his lover Deliah was bought out by the Philistines to discover his secret, and though he did lead her on for quite some time he eventually told her. She cut his hair and he was promptly captured and blinded by swords, because that’s really the only way to avenge the deaths of thousands.

The Philistines forced the blind and weak Samson to grind grain. However, they didn’t keep tabs on the whole “hair” thing. Once his hair grew back and Samson realized that he’d found a holy loophole, he prayed to God to restore his strength so he can at least go out with a bang. Samson then knocked over two pillars in a temple, bringing the whole damn thing down and killing more Philistines than every single one of his murderous rages before combined. But because God’s forgiveness doesn’t make a whole lot of sense, Samson died with his enemies having learned a lesson about keeping your promise to God but having absolutely no time to apply it.

Commander of a Canaanite army who took his turn at oppressing the Israelites, a popular hobby of the day. He commanded several hundred iron chariots and in legends outside of the Bible could shake walls and kill wild animals with his voice. He also conquered every enemy he faced. Consider him the evil, more vocal Samson, if you will.

Sisera does have one official loss under his belt. An Israelite force of ten-thousand turned the tables at the Battle of Mount Tabor. After his own forces were swept away by a river, Sisera called it a night and fled to Heber in the Kenite’s settlement. Heber, an apparent associate of his, offered to hide him out until the heat died down. The mighty Sisera was hidden underneath a rug, and that was that.

While a rug may have been good enough to fool the average Israeli army, no one took Heber’s wife Jael into account. While Sisera was asleep Jael took a spike and a hammer and crushed his freaking skull, pinning it to the ground and killing him at once. With Sisera dead the Israelites lived in peace for forty years. Interestingly enough, some narratives claim that Jael first tried to exhaust Sisera through sex, apparently doing the deed with him seven times before doing God’s work with the ol’ spike and mallet. However, because this sin was committed so she could better carry out the work of God (i.e. killing a sleeping man with a giant nail), it’s not frowned upon. Go figure. 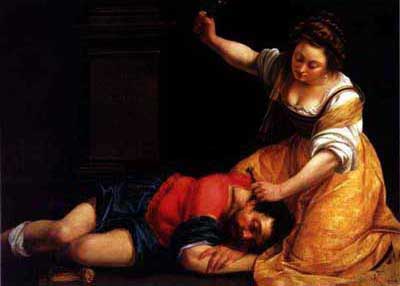 Third son of King David, Absolom was the most handsome man in his father’s kingdom. His good looks were framed by long, flowing hair. God’s twisted sense of irony should tell you that last bit is an important detail, so please do take note of it.

Absolom was, however, a bit of a cocky bastard and staged a revolt against his father (but not before sleeping with his concubines, because hey, rebellion). Israel and Judea joined his cause, forcing David and his own supporters to get the hell out of Dodge and flee as Absolom took the capital. But David wasn’t about to be outfoxed by his own son. Instead he sent an aide to infiltrate his son’s court and force an attack. Shit was gonna get real.

The two armies met in the Ephraim Wood and Absolom was completely routed. While fleeing, his manly locks got stuck in a tree. His mule ran out from underneath him, leaving him to hang high and dry. David’s commander Joab took advantage of the situation and executed him – still hanging from the tree – with a group of spearmen and swordsmen. David was upset by this, but it’s kind of his fault since he did trick his son into attacking him. 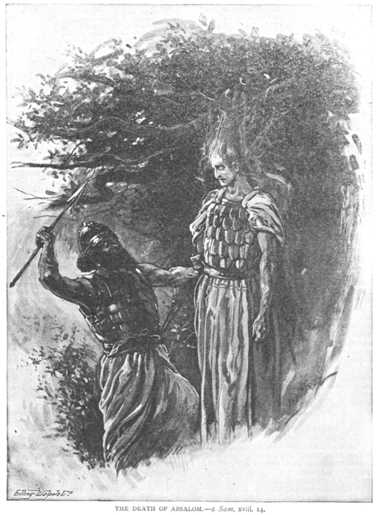 Help a brother out?

The son of Judge Gideon, Abimelech’s name is a proof of inheritance and was used to assert his right to rule after the death of his father. However, he was the son of his father’s concubine and not a true heir, so he had to claim the title by force, killing his seventy or so step-siblings. The youngest brother managed to escape before Abimelech was made king of Mannasseh.

The town of Thebez revolted, presumably because they felt his birth certificate was a forgery. Not too fond of negotiations, Abimelech attacked the town to remind them who wears the big pants. It was during this dick-punch crusade that he met his end when a woman atop a wall threw a millstone at his skull. Once he realized he was about to give it up to the spirit in the sky, Abimelech ordered one of his soldiers to kill him so no one could say he was slain by a woman. While you may or may not agree that his technicality makes a difference, it doesn’t change the fact that his head was crushed by a freaking millstone.

Abimelech, seen here putting the top two cards of his library into his graveyard.