A septic tank is being built in areas where there is no urban sewage system. It is used to store wastewater and thus prevent the spread of odors and contagion.

The construction itself is simple. It is a concrete, underground room divided into two connected chambers. The larger part accounts for two-thirds of the volume, while the smaller occupies one-third of the total volume.

The size of the septic tank can be calculated concerning household water consumption. When constructing, the rule is to design as the smallest volume three cubic meters for houses of up to five rooms, and each subsequent room the volume of the pit increases by one cubic meter.

In some countries, there is a legal minimum of 10 cubic meters. As for the construction itself, it begins by digging a hole eighty inches larger than the planned septic tank and pouring so-called lean concrete into the bottom of the future septic tank.

It is not bad to leave a single branch pipe in front of the septic tank to allow cleaning in case of congestion. It should be noted that septic tank emptying will be less frequent if you use a septic tank cleaner and maintenance agent. These are bio-enzymes that break down organic waste into carbon dioxide and water.

It is used by occasionally inserting a sachet into a toilet bowl and that’s it. In addition to less need for emptying, the unpleasant odors of sewage are visibly reduced. This is very important if you have planned to convert a concrete septic tank for other purposes because your job will be easier.

If you happen to have a septic tank on your property and you have no need for it due to changes being made to the property, you may find yourself wondering how to go about dealing with the septic tank. Here are 3 options provided by ajfoss.com.

– Option 1: Collapse the tank to full.
– Option 2: Remove the tank.
– Option 3: Convert the space the tank took up and use it for something else, like storing wine or boats.

The first step in making this sort of decision is to assess what sort of property you are working with. As an example, a home has its tank located underground with a lawn that stops at a steep bank overlooking a lake. This means that it would be easy to access the tank’s space when coming from the lake.

The next step comes in analyzing whether it would be possible to convert a tank is figuring out if it is possible to clean the tank up, paint it and the like while avoiding any health risks during the conversion. While you would hardly use such a space to install a guest room, a storage facility is a much more likely scenario-especially since few potential burglars would think to look in a space believed to store a septic tank.

When looking to convert a tank, every step must be done to code and permit. One of the most important rules of thumb is to NEVER enter a septic tank, regardless of its age as there may be fumes that will quickly eat away at your health and even risk death.

Before you go into converting a tank for some other purpose, there are three things you need to verify.

If, after assessing the costs of all these steps and pursuing them, as well as possibly adding windows and ventilation to improve air circulation and lighting; conversion may be the right path for you. That said, it may be cheaper to just collapse the tank, have its remnants hauled away and then build something purpose-built to your needs from scratch.

When it comes to converting a septic tank, even the simplest mistake could lead to a person or animal becoming ill, hence the mention of adding antibacterial measures to your paint. One way to confirm that the area is safe of bacteria would be to take swabs of various surfaces within the tank and then have them analyzed by a qualified lab nearby.

If the analysts say that you are in the clear of any bacterial health risks, then you should be golden for the rest of conversion. Lately, plastic septic tanks have been produced on the market.

They anchor in the ground, virtually replacing masonry work. The cleaning of plastic septic tanks is planned to be carried out once a year. They are not intended to drain water from the shower, washing machine and sink, but only from the toilet. Also, you cannot convert this type of septic tank into a pit for any other purpose.

We hope this article has helped you if you have a plan to convert your concrete septic tank for other purposes, for example, if you want to make a water tank from it, or something like that. Do not forget for one second that hygiene is in the first place when it comes to this subject. 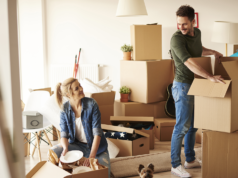 Top 8 Packing Tips for moving into a New Home