Rock ‘n roll is awesome, and fiction is pretty badass, too. As such, it only makes sense that when the two of them combine, the badassery that results is comparable to Sylvester Stallone beating up Megatron. With his bare hands, on top of a volcano. With, like, Playboy Bunnies in the background.

All exaggerated descriptions of masculine interests aside, fictional bands are a novelty for many of us, a slightly clever way of celebrating our love of pop culture and shared childhood memories. You know those hipster kids who think they are cool because they like a band that no one else has heard of? Doesn’t matter, because you are infinitely cooler for liking a band that doesn’t exist.

With that in mind, let’s take a look at some of the more memorable musical groups that never were.

Hailing from Liverpool, The Beets are a trio of rock and rollers whose world-shaking musical creations are familiar to anyone who grew up in America during the 90s and owned a TV. Thanks to Nickelodeon’s dominance over our collective childhood, we all remember laughing at the antics of the Rugrats, pretending (unsuccessfully) not to be scared by episodes of Are You Afraid of the Dark?, and, perhaps most importantly of all, coming of age with Doug, the animated chronicles of an awkward and self-conscious kid in the suburban town of Bluffington. The Beets, a not-veiled-at-all tribute to The Beatles, were a constant presence in the show, and we’ve got to credit the series’ creators for having the foresight to hire guest songwriters who were actually capable of crafting some genuinely catchy tunes. Who didn’t watch Doug and secretly enjoy the song “Killer Tofu” just a little bit? It wasn’t uncommon during the 90s to hear one of your peers softly humming the melody on the bus to school, hoping no one would notice.

As an added bonus, many of us watching the had not yet been exposed to a lot of real rock music, and when our parents told us that The Beets were actually just caricatures of another Fab Four, we were introduced to some of the greatest popular music ever released. Add in the fact that Doug often referenced other fictional bands that seemed to be based on real groups—“The Psychedelic Fuzz” sounds a whole lot like The Psychedelic Furs—and as it turns out, this little cartoon may have been even more hip than we give it credit for. 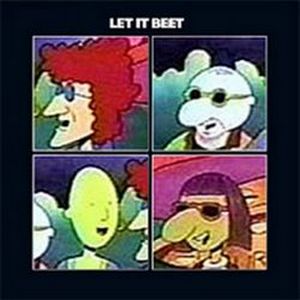 So of course, we were all more than a little upset when The Beets broke up during Disney’s not-so-gritty reboot of the original series. Is nothing sacred?

Jesse and the Rippers

Full House may have permanently ruined an entire generation of young American men. Those of us raised on the never-ending drama of the Tanner family learned far too many of our significant life lessons from this series, and the results may have been disastrous. What do we think a normal family consists of? Every single relative, as well as your dad’s best friend, living together under one roof. In San Francisco. Forever. With a dog.

What do we think nuanced and crowd-pleasing comedy consists of? Dave Coulier talking in a Popeye voice whenever he opens his damn mouth. And, of course, what do we think defines pure male power and masculine strength? John Stamos rocking a glorified mullet. 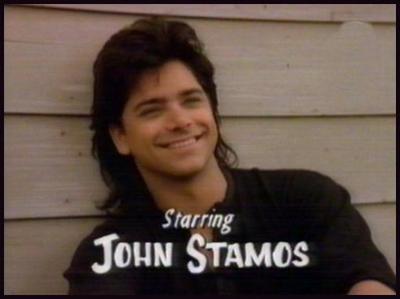 Yeah, Uncle Jesse defined the hard-living rock and roll lifestyle, didn’t he? Living with his brother-in-law, marrying a morning talk show star (that’s like, only a few steps down from full-fledged movie star), owning a motorcycle, hell, occasionally even riding a motorcycle. On top of that, he was a struggling musician, constantly toiling on failed projects but best known for his work as the frontman of Jesse and the Rippers. He had a studio down in the basement where he frequently brought a random gang of musicians representing what the show’s producers thought wannabe rock stars looked like (that means they were dressed like 80s preteens waiting in line at a Van Halen concert).

Sadly, nothing much ever came of the band. They played a few shows, even went on the road a little bit, but Uncle Jesse eventually had a family to support, and decided to devote more of his energies towards his advertising business.

Way to sell out to the man, John Stamos.

Here’s a helpful hint for those striving towards success in whatever area of business you may be specializing in: sometimes, the stupidest ideas ever just happen to become the most popular. Such is the case with The California Raisins, a rhythm and blues claymation group that was originally created in order to, well, sell raisins. The first commercial featuring these hip musicians was a shot in the dark attempt by a group of advertisers to remind television viewers that not only do raisins exist, but they are delicious and should be purchased as soon as possible. Apparently making fruit sing is the best way to increase consumers’ desire for it. 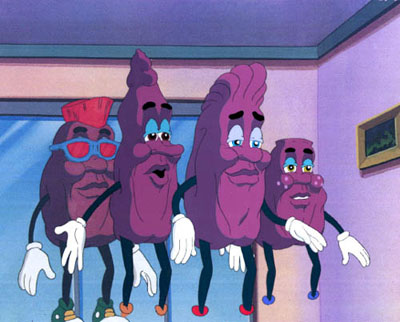 To the surprise of just about everyone involved in the admittedly ridiculous scheme, the quartet became a massive national hit, going on to not only sell raisins, but also become a full-fledged brand all its own. Honestly, how many advertising campaigns have inspire its own cartoon, merchandise, as well as a couple of popular TV specials? Even those damn Budweiser frogs were never that successful.

Ironically, for a group of characters designed with the sole purpose of selling food, The California Raisins accomplished much more than that economically, as they appeared on all sorts of merchandise throughout the 1980s, much of which was probably not edible (though that probably didn’t stop some folks from trying). They also released a few actual albums, begging the question: when does a group cross the line from fictional band to honest-to-goodness rhythm and blues superstars? And how trippy would it be to see a bunch of raisins in concert?

The one and only Spinal Tap may answer the question posed above, but not the one about the degree of trippiness one would encounter at a concert where fruit came to life. Although this particular rock ‘n roll group was conceived of as a parody of over-the-top heavy metal bands, the truth remains that not only did all of the actors portraying characters in the band play their own instruments, but they were also involved in writing the songs. Add in the fact that Spinal Tap, like The California Raisins, released actual albums of original tunes and even performed live on occasion, and one has to wonder whether or not Spinal Tap should be thought of as a genuine rock and roll act. 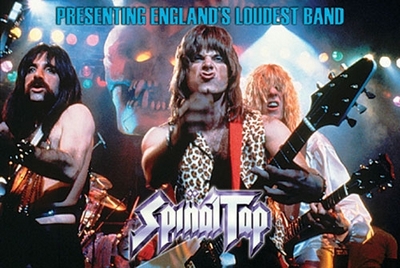 Sure, their music lyrics were meant to be ridiculous, but the reason why This is Spinal Tap was so comically effective was that well, a lot of rock music through the years has been fairly ridiculous on its own, and it doesn’t take too much exaggeration to make it comedic. “Listen to What the Flower People Say” doesn’t sound all that different from any other 60s psychedelic tune, and “Big Bottom” is only slightly sleazier than an AC/DC creation. Add in a mythology-themed stage show that would fit in perfectly at a Black Sabbath concert, and you’ve got to wonder if some young heavy metal fan ever found a Spinal Tap novelty album, gave it a listen, and assumed they were just a badass rock band.