For the longest time, there was only one kind of Lantern in the DC Universe, green. Then, they added an evil one, the Sinestro Corps. Then they added a Blue one. Then a Red one. Then basically they decided to just go nuts with the colors. But when you’re recruiting police from across the universe for ONE huge organization, forget seven of them, you’re going to have a few losers in the bunch. Here are our favorites, and notice we didn’t even get into the other colors; all of these are the HEROES. 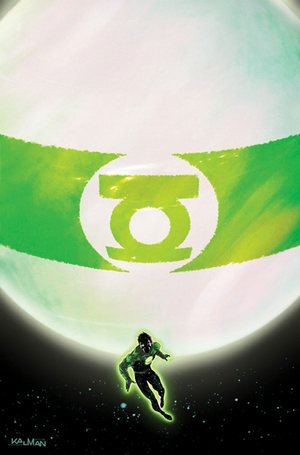 Mogo started off as a joke written by Alan Moore, who had a heck of a lot of fun at the Green Lantern Corps’ expense (half this list is by said crazy Englishman), introduced in a story called “Mogo Doesn’t Socialize.” You see, Mogo’s a planet.

Yes, a planet. Mogo’s sentient, and has a power ring.

Forget the power ring, though. Think about physics here. If Mogo shows up anywhere, he’s going to throw the entire solar system out of whack. He’d send planets tumbling into the sun, steal moons, ruin orbits…this guy can’t go anywhere. That’s probably why the Guardians, who apparently really don’t like to take back rings once they hand them out, no matter how stupid the recipient is, just have him sending Rings to new Lanterns. He’s basically a cosmic switchboard. 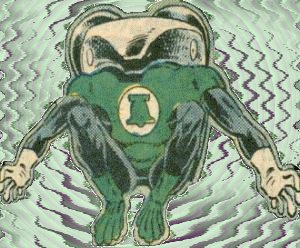 You might be wondering what this guy’s deal is, seeing that he doesn’t seem to have any eyes or ability to see. Well, that’s because he’s from the Obsidian Deeps, a region of space where there’s no light whatsoever and thus no perception of sight. Or color. The problem becomes immediately obvious, as does the hand of cackling madman Alan Moore.

It turns out they solved it by turning the ring into a bell and making it something that works with sound instead of light. This seems like an awesome idea because it immediately gives the Green Lantern Corps a huge advantage in their fights, creating constructs out of sound instead of light. So, smart guys that they are, they leave Captain All Ears to it and we never see the guy, or hear about turning rings into bells, again. 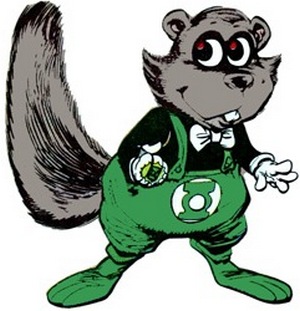 That’s Ch’p. No, he isn’t from a Disney cross over, or an Elseworlds, or some other really obvious excuse for a bad idea aimed squarely at small children. He’s a giant talking chipmunk with one of the most powerful weapons in the universe. No, we have no idea why DC didn’t realize this was not, in fact, cute but instead pure nightmare fuel. Rats with power rings is just not something we want to think about without a large bottle of vodka handy.

And in case the idea of a sentient squirrel who could run you over isn’t bad enough, he was brought back as a zombie. You know, because cute talking animals portrayed as zombies will totally make us take this crossover seriously, instead of being the dumbest idea this side of zombified Power Pack. 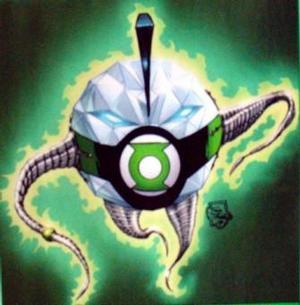 There are a lot of things that can make a superhero intimidating. Huge muscles. Energy powers. Having a Green Lantern ring. Tentacles. Chaselon has two of those going for him, namely the last two. And then there are things that make him less intimidating, like being a gigantic hunk of glass.

Chaselon is a crystal being, which, yeah, could theoretically exist, but come on. He’s a big hunk of glass. Fighting this guy is like being attacked by a bedazzler bead. He probably only wins because his opponents are too busy laughing to take him seriously. 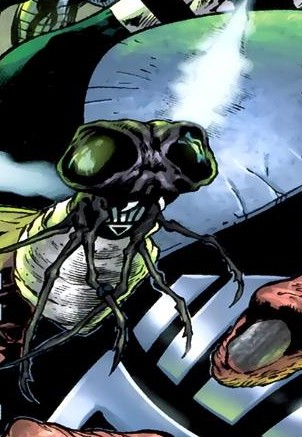 Hey, speaking of “less than intimidating”, how about a creature that only has the Green Lantern ring going for him, and without it, you could kill him with a piece of plastic costing a buck ninety-five? Say hi to Bzzd, everybody, the only Green Lantern you can squish.

Bzzd is apparently a pretty seriously tough guy, having taken out space pirates and captured DC’s premiere annoying jerk, Guy Gardner. None of which makes up for the fact that he’s an insect that can be defeated by Raid.