By now the economy is slowly starting to recover, but that doesn’t mean that it’s any easier to find a job that will allow you to pay the mountain of bills covering your living room floor. In fact, if you’re looking for a career change you should probably brush up on your interview skills and learn some Do’s and Don’ts of job searching; and as far as Don’ts go this is probably the best place to start.

Ask for a job at gun point

We all know where the good jobs are: in the fast food business, but those damn teenagers are always undercutting the honest working man. It’s time someone did something about it, preferably with a gun! With dozens of Taco Bells robbed every other month (if you don’t believe us just google Taco Bell and robbery) walking in with a pistol in your hand demanding all the tacos you can carry doesn’t seem like a bad idea, and since you already showed that you have initiative and problem-solving skills, why not ask the manager for a job? 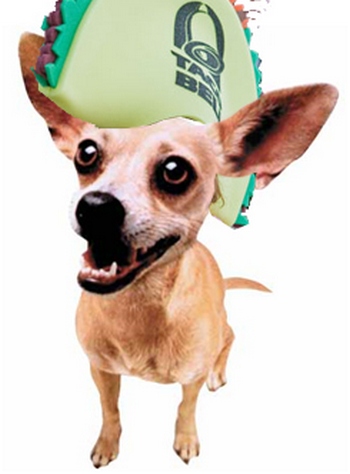 Unfortunately, it turns out not even an armed robber is enough to convince a Taco Bell manager to give out jobs in THIS economy. Even better, not only did the robber walk away without a job offer, but he also forgot to grab the money.

What’s interesting is that this is not the only example of a stupid thief applying for a job in the very place he is robbing.

In Burnsville two teenagers applied for a job at a juice store then walked a few feet away and decided to rob a man. Petty thieves might not be the smartest, but robbing someone within walking distance of the place where you just filled a job application with your real name and address, should ring the “this is a bad idea” bell.

However, the prize for most idiotic thief goes to a San Diego man who tried applying for a position as police officer, despite the fact that he was wanted for robbery. He was caught when he walked into the police station in order to interview for the job. Displaying impressive persistence, he kept asking if he could re-apply for the position even as the cops were locking him away.

Walk around with an old time sandwich boards? 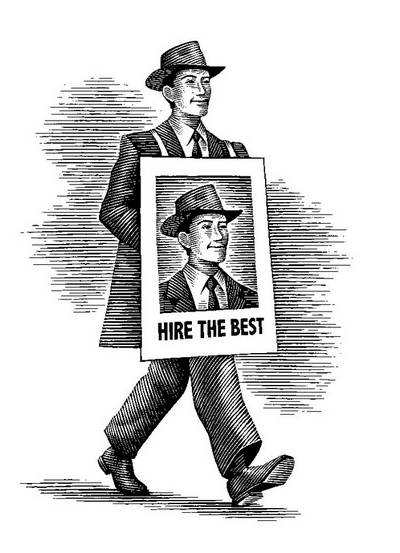 Nothing says: “good employee” like walking around with a board.

Since going to interviews seemed too bothersome an unemployed toy maker decided to bring back the good old times of the depression era by standing around with a billboard on his chest. While the tactic didn’t get the man a job, blogs and news companies are milking the story for every penny bemoaning the horrible depression that forces people to sell themselves on street corners. Businessweek.com is even running a reality-like series of webepisodes where the man gets help from a professional coach. Nonetheless he is still unemployed (we don’t want to cast harsh judgments here, but maybe he should invest in some night classes instead of sitting on the street corner.)

On the bright side the same depression era tactic was used by a recent Dallas MBA graduate too lazy to write a resume, and he got a job within a day. Those damn teenagers taking our jobs again!

If anyone out there is motivated by this example and decides to go around with a billboard themselves, keep in mind that you should avoid St. Patrick parades. A man in Indianapolis tried wearing a sandwich board advertising his job experience into a crowd of drunk Irish people (because we all know drunk Irish are great employers) only to be booed and get insulting messages left on his voice mail.

Just pretend you actually work there

John Gaines, a copywriter in Seattle worked on a project as a freelancer, the Monday he was supposed to finish his project he simply picked up some “important looking” papers from the trashcan and sat at an empty desk, surfing the net. If anyone asked him what the heck he was doing still there he just said he was on a secret project. The gimmick worked and the company eventually hired John for no other reason than the fact that he was around all the time. 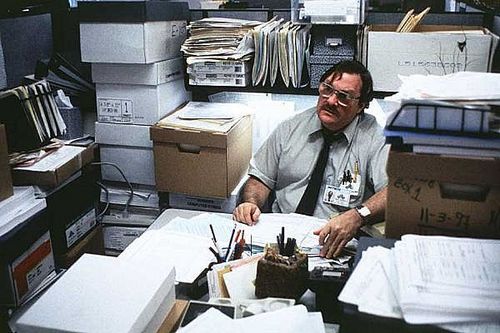 “Of course I work here, look at all the important looking paper I have.”

To our surprise, this technique seems to work surprisingly well within any technology related job. Ron Avitzur and another programmer were working on a graphic calculator when they were laid off by Apple. Like any good worker they ignored the corporate decision and sneaking back into the office continued working on their project.

The two ignored confused co-workers and security personnel for months to come, all the time using Apple equipment to build their calculator. At one point they even convinced a crew sent to clear the offices that it was all a mistake and they were supposed to be there. Years later, Avitzur owns his own company and still makes the graphic calculators he researched in the Apple labs.