Ever since the radio star lost a tense standoff with video, we’ve been forced to endure countless crummy music videos revolving around a couple of tired themes. Sometimes husky dudes in leather stand uncomfortably close to each other in a needlessly industrial setting. Sometimes a mournful singer-songwriter simultaneously moistens panties while tempting men into taking a sewing needle to their eardrums. Also, in rap videos, there are breasts.

Thankfully, we get an artist now and then who has managed to buck the trend of mediocrity. Rather than mindlessly rehashing what everyone else is doing or bending over and grabbing their ankles to receive orders from their executive overlords, they do something cool. And then you have videos that go even farther. These aren’t just complicated music videos. These are the extremely high concept, and usually high budget too.

Basically, the artists on this list put more thought into their five minute advertisements than you put into the naming of your firstborn child, and it shows.

Chances are, even if you don’t recall the name of the video or the band, you can still recognize the visuals and the tune. Unless you’re Norwegian, in which case you might have each of the band member’s names tattooed on your lower back.

The video actually had a previous version, wherein the group simply stood around playing against a lame backdrop. But in this incarnation, a still-fairly-dull video gets some unexpected zazz by way of a cool animation technique. The video was innovative, unusual and pretty bold, considering the world was already associating animated plumbers as heroes rather than villains by 1985.

The video starts out with a pretty dubious concept: a woman enjoying a comic without being accosted by nerds. Then it goes even farther and before you know it, the protagonists are running for their lives for some reason. The lead singer even gets roughed up before pulling a Pinocchio and becoming a real boy. The video won a number of awards because of the live action-animation technique used, called “rotoscoping”, which took over two months of painstaking frame-by-frame tracing to accomplish. 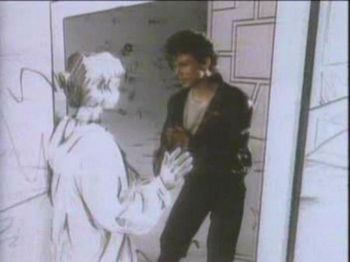 Imagine doing this. All day. Every day. For two months. Probably in Korea.

Unfortunately,there is currently no information available about how many times singer Morten Harket needed a swift kick in the crotch to reach the ear-splittingly high notes in the chorus.

The previous video is proof that a single interesting idea can, at the very least, get you into a VH1 mashup of one-hit-wonders. And this next one proves that a lot of somewhat interesting ideas can lead to eyerolls strong enough to cause serious retinal damage.

Oh yes. Those were, in fact, real trained dolphins. Just a small part of the over four million dollars this cheesy, rambling video cost the people foolish enough to own stock in Vivendi.

For those too lazy or intelligent to watch a nine minute video starring Axl Rose, the general idea is that poor Axl has become “estranged” from his significant other and is holed up in the house he had previously been firmly evicted from. Police squadrons, oil tankers and Jesus-Slash (who would make a pretty awesome figurehead for a new age religion, by the way) all play their part. Only then do the trained dolphins come in to play. The entire thing is complex and convoluted in the way only ego trips for aging rockers can be. 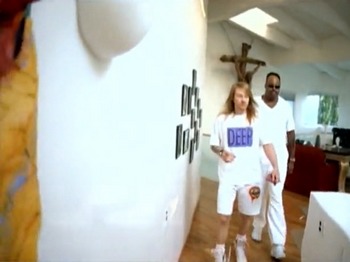 He also owns about six other shirts that say “SUBTLE”

We can only imagine how rambling and ridiculous the next videos are going to be now that Axl Rose knows that we care about Chinese Democracy.

While most of us would take a song entitled Pork and Beans and produce a video based around banging and farting (come on, it would be pretty great), Weezer is not most of us. To them, the only thing that could make their video come alive was viral video stars.

Yes, with the greatest collection individuals who answer to “That One Internet Guy” ever assembled, the band has a video that is as intricate as the plot is dubious. Basically, Cuomo and Company insist that people should be themselves for better or worse; whether you’re a homosexual with too much eye makeup, a failed ninja with a static problem or a band that claims to “just not belong” while filming videos at the Playboy Mansion.

There are dozens of references to viral video hits crammed into the short three minutes and change. The band basically dances and wanders through various YouTube classics, though thankfully with much higher framerates than in the previous iterations. A huge number of internet “stars” appear to act out parts of their famous uploads. Rather than some kind of depressing smorgasbord of sadness, the band accomplishes their goal of remaining upbeat: even the chubby Romanian pop enthusiast is grinning. 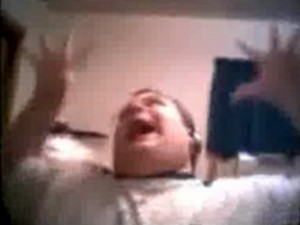 I guess it doesn’t really take much though.

Overall it’s a lot of fun, and it does the internet meme thing on a much grander scale than any other attempt has before. In fact, it would have placed higher on this list if it weren’t for the feeling that most of the people in it didn’t really have anything else to do with their time.