Home Home The 6 Biggest Things Decided by a Single Vote

Whenever you think about the world of politics, we can bet that you always imagine any votes undertaken as ending in landslide victories; we mean, there’s never any close shaves are there (ignoring the 2000 Presidential Election)? Well, it turns out that there have been, particularly at some rather crucial votes which could have changed the world as we know it beyond all recognition had they gone to the other guy.

In the election of 1800, Thomas Jefferson and his running mate Aaron Burr tied with 73 electoral votes each. While today both candidates would simply fight to the death surrounded by a ring of lava (as per the 12th Amendment), this represented a major impasse for Americans at the time. After thirty-five ballots of with no victor, Alexander “Dibs on the Ten” Hamilton, one of the leading Federalists, had an epiphany. Why not peanut butter AND jelly? Then, he had an even greater epiphany. Why not swing the election for Jefferson, who he hated marginally less than he hated Burr? And thusly, the election was decided. 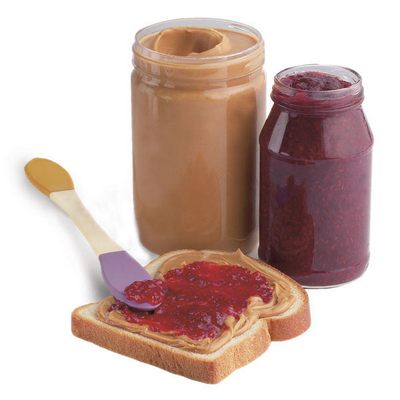 And lunch was eaten.

First, and less importantly, Thomas Jefferson established the keystone of American foreign policy and diplomatic tact, sometimes known as the “Fuck You Doctrine.” When pirates began harassing American shipping off the coast of Africa, Jefferson launched America’s proudest tradition: blowing the hell out of anything that happens to annoy us. 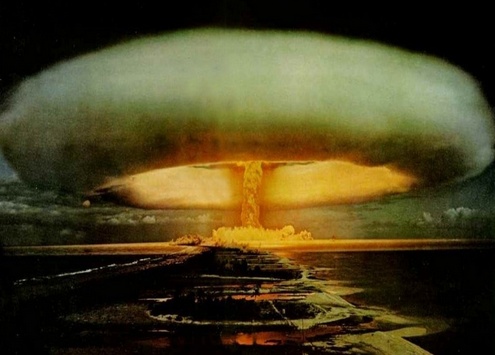 More importantly, Jefferson is responsible for the Louisiana Purchase. The deal doubled the size of America with the stroke of a pen. Huge tracts of land were suddenly open to American settlement. Where would we be without the sweeping grandeur of North Dakota? Given that the movement that tried to break off the North into a separate country tried to give Burr their presidency, it seems safe to assume that he would not have been supportive of the Louisiana Purchase. In fact, by the end of the decade, Burr had been all but completely shut out of politics, accused of treason, and shot Alexander Hamilton in the stunning sequel, The Election of 1800 II: Burr-ly Legal.

In the election of 1840, the Whig Party’s R&D Department finally succeeded in reverse engineering Andrew Jackson. The Whigs, who quickly sprained their shoulders in the midst of elaborate high fiving antics, were thrilled to nominate the Indian fighting General William Henry Harrison. While today we know that Whig engineers used shoddy materials in constructing Harrison, leading to his eventual catastrophic structural failure after someone left him out in the rain on inauguration day, he handily won the election. However, the Whigs chose John Tyler to serve as Harrison’s scrappy sidekick. The reason Tyler won? The selfish bastard broke a tie by voting for himself. 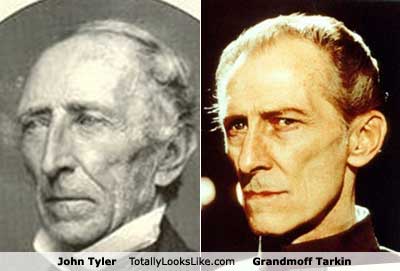 From what we can gather, the history of the state of Texas mostly revolves around cattle and silly hats, but there was a time when Texas was an independent nation of cattle and silly hats. The reason it became a state was part of an extravagant attempt for John Tyler to get re-elected. Tyler, perhaps the most magnificent douche bag to ever roam the North American continent up to that point, had been abandoned by the Whigs for his jagweedery and nearly impeached. Annexing Texas became the only way for Tyler to worm his way back into the nation’s good graces. Thus, in the span of a decade, Texas progressed from the land of the Taco Bell to the land of the Liberty Bell. And what a grand acquisition it was! Miles of scorching desert, deadly scorpions, and silly hats became ours in all its glorious splendour. 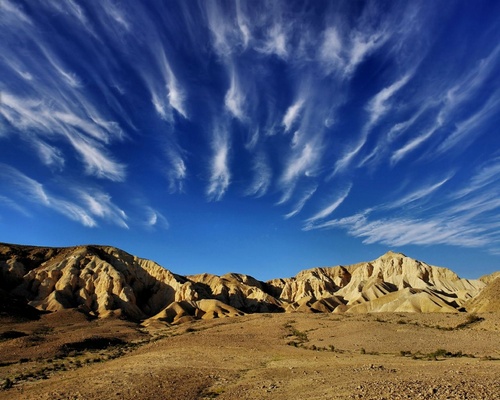 Johnson was an absolutely wretched excuse for a president. Congress hated him so much, they tried to impeach him. Twice. The second time, they had Johnson firmly in their grasp (heh), but realized that removing him would place Senate President Ben Wade in the presidency and completely shift the balance of power in American government. In the end, seven Republicans refused to vote for Johnson’s removal, leaving him just one vote short of the required two-thirds majority. 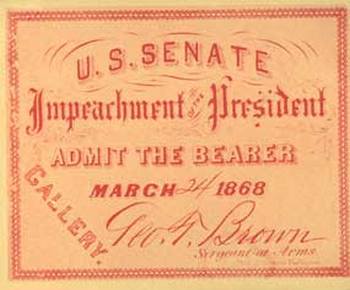 Man, all those ticket holders must have been disappointed

Convicting Johnson would have meant three things. First, African Americans probably would have enjoyed the following century or so a little more due to Ben Wade’s insistence that Southern whites be put on double-secret probation and stop screwing over blacks. Second, it would represent a major increase in power for Congress, similar to the Glorious Revolution for England or Human Extermination Day for robots. Third, the robots would have never risen up and forced comedy writers of the future to travel to the past to warn humanity of Human Extermination Day. 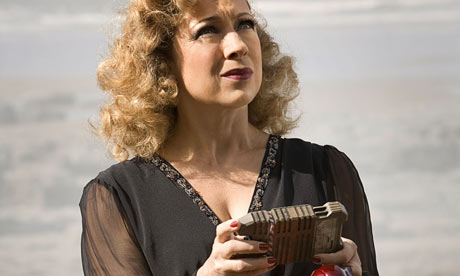 Samuel Tilden was the Democratic candidate for the presidency in 1876. Despite having the personality of lukewarm plankton, he was nominated because he promised to end corruption and unleash a wave of unspeakable horror by ending southern Reconstruction. Due to voting irregularities, the election was thrown to a 15 member electoral commission which decided by one vote to elect Rutherford B. Hayes, Tilden’s opponent. Hayes then ended the crap out of Reconstruction anyway.

Hayes’s victory led to the end of Reconstruction, but a Tilden presidency likely would have been horrific squared. The Democrats had already demonstrated their overriding fear of black cooties to the point where President Grant barfed on the Postmaster General and declared martial law in KKK areas. Southern whites at least had to pretend that they weren’t committing atrocities with a Republican president. 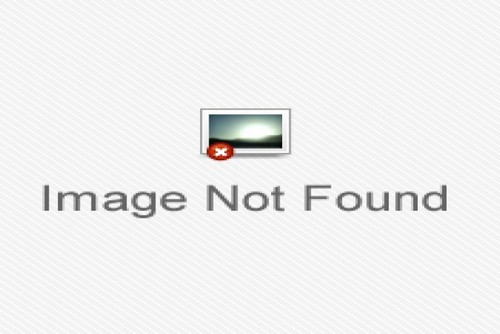 Nope, we’re not showing an image of that, thank you very much

Following a bizarre election ordeal that was given to the House of Representatives, Andrew Jackson lost the election of 1824 when a single New York delegate threw his vote to Adams. Jackson eloquently responded by declaring mega-bastard-super-turbo-revenge and set out to win at all costs in 1828. 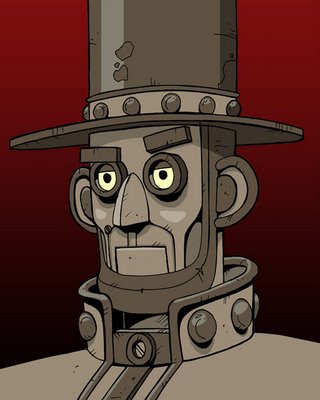 Of course, helped by his good friend Robo-Lincoln.

John Quincy Adams primarily succeeded in creating the Tariff of Abominations (a fantastic name for a rock band), which succeeded in making the South furious enough to come up with badass nicknames for economic policies. Essentially, Jackson’s victory would place history about four years ahead of schedule, possibly sparking an earlier populist-style era creatively named Jacksonian democracy. Also, due to the vagaries of space and time, you would be making out with a super model right now. Damn you, Adams!

If, in 1911, you had told any man of influence that America would allow women to vote within ten years, he would likely chuckle politely. Then, his security team would have you savagely beaten with rusty gardening tools for wasting the boss’s time with crazy talk.

However, by 1920 the women’s suffrage movement had made broad progress (get it?!?). Thirty-five states were willing to sign off on the 19th Amendment, but thirty-six were required to actually ratify it. Three more states refused to even consider the amendment, but Tennessee’s legislature agreed to hear the issue after their annual Testostofest arm wrestling & feats of strength competition. 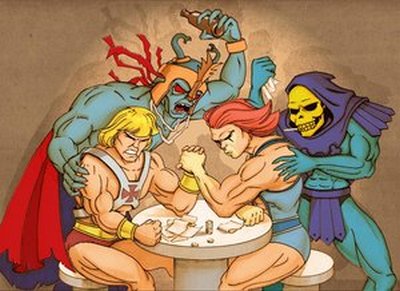 Harry T. Burn, the youngest member of the Tennessee legislature, had already made it clear that he intended to vote against this cruel subversion of America’s glorious democracy. A bleak future in which millions of upstanding young men every election had all thoughts of voting dashed from their heads by the presence of boobies only one ballot booth and six layers of undergarments away was imminent. 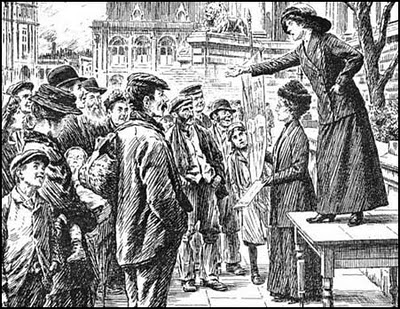 Note where all the men are looking.

The Tennessee legislature found itself tied 48-48 with Burn ready to strike the killing blow when something dramatic shattered the situation. Burn received a letter from his mother asking him to vote for suffrage.

Because Burn believed “a good boy always does what his mother asks him to do”, he marched into the legislation hall with a copy of his mother’s letter and broke the tie in favor of suffrage. The Tennessee Legislature’s next vote unanimously declared Burn a weenie and stole his lunch box.

In a proud moment for democracy, anti-suffragists then chased Burn through the halls of the Tennessee Legislature, presumably with the intent of giving him a wedgie and throwing him in one of the lockers. Burn successfully concealed himself until the hall monitor arrived. Thus, the 19th Amendment successfully passed, and a future free of sexism was secured for millions of sexy dames. Amendment 19B, “No Fat Chicks”, would later die in committee.