While video games are among the newest form of popular entertainment, good old marketing gimmicks and publicity stunts are classic and time tested. While there are occasionally a few clever publicity stunts for video games, there are a many others that quite often they end in sheer, unmitigated disaster. Here at WeirdWorm, we don’t really care too much about when things go as planned, it’s not nearly as funny as when stuff goes horribly, horribly wrong. And with that, we humbly present to you some of the dumbest video game publicity stunts. 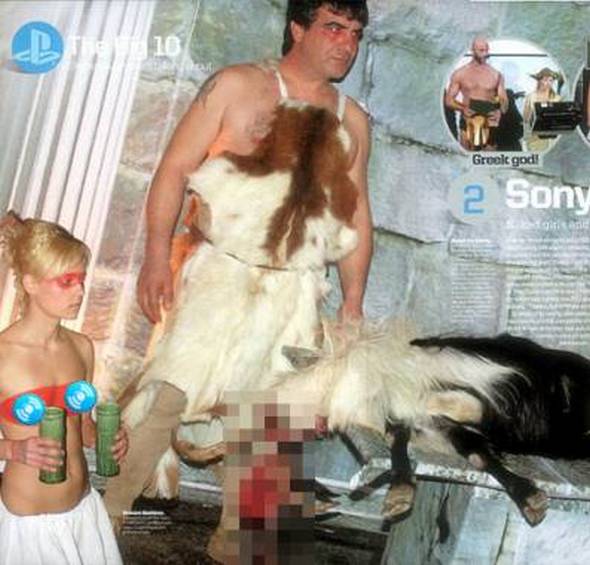 Nothing says Action Brawler like a chubby Greek guy.

The image above is from a 2007 Greek launch event for God of War 2, which from the looks of it, had all the necessary ingredients for a great launch party. Greek theme? Check. Scantily clad ladies? Double check. Decapitated goats? Chec- Wait, what?

In keeping with the slaughter and violence found in the wildly popular video game franchise, Sony thought it was appropriate to snag a dead goat, decapitate it, and stuff it with offal. Guests at the event were then offered to reach inside the dead animal, pull out some of the tasty meat treats inside the goat, and eat them. When at a party with half naked, body painted women, the last thing anyone wants to see is a butchered goat acting as a fondue pot- it’s scientifically proven to be the ultimate buzzkill. Sony suffered quite a lot of fallout, and deservedly so, from everyone from animal rights activists to people with a little good taste. Sony had to recall almost 80,000 magazines which had document photos of the event, in order to try and brush the snafu under the carpet, but as anyone who has an embarrassing photo of them on the internet knows: what goes on the internet, stays on the internet.

Sega Saturn jumps the gun (and the shark) Ever played one? Yeah, didn’t think so.

In the middle of 1995, Sega was in a tough spot. They had to release their newest console, the Sega Saturn in North America that September, only a few days before Sony released their PlayStation. Sega knew that the PlayStation was the better machine by far, so at that year’s E3 (the annual video game expo), they decided to pull a little PR magic.

During the Sega presentation, Tom Kalinske, the Sega America big wig, dropped the bomb: as he spoke, the Sega Saturn was available to purchase. Suddenly rescheduled a whole four months before its release, at $399, the publicity stunt seemed to be a premature success.

That is until the Sony press conference, only minutes later, where Sony bigwig Steve Race walked up to the microphone and calmly said just one word; “$299”. Amidst the crowd suddenly declaring “OH SNAP!”, a few Sega execs could be heard bitterly weeping, knowing their stunt just got royally pooched.

`The rest unfolded like a terrible disaster film- everything went down the drain. The sudden release of the Sega Saturn meant that there was hardly any marketing or public knowledge of the device, and worse yet, none of the game developers were told about the sudden date change, so the Saturn launched with many incomplete games- games which were supposed to be released in four months time, not two minutes. Add to that the fact that Walmart wasn’t aware of its release, and Sega was in trouble. During the Saturn’s four month head start, it sold 80,000 units. When the PlayStation was released, it sold 100,000. In one day.

Sega was undeniably destroyed, and in the end, they posted almost $300 million in losses and had to lay of almost a third of it’s employees. Oh snap indeed.