Home Home The 4 Craziest People on the Internet

Most of the people who use the Internet fall somewhere between Charles Manson and Street-Corner-Hobo-With-Surprisingly-Strong-Religious-Convictions on the crazy spectrum. This is the likely reason that most people spend as little time wandering about the world wide web as possible: you check your emails, hit up CNN.com for your news, then check Weird Worm for your entertainment (or, for the cynics among you, Weird Worm for your news and CNN for your entertainment).

However, hidden deep among the vast sea of illegible YouTube comments and terrifying pretend-hacker groups is a subset of creatures whose worldviews are so mind-blowingly mind blowing that their very existence transcends common humor, heading straight for the realm of the surreal. These are their stories. 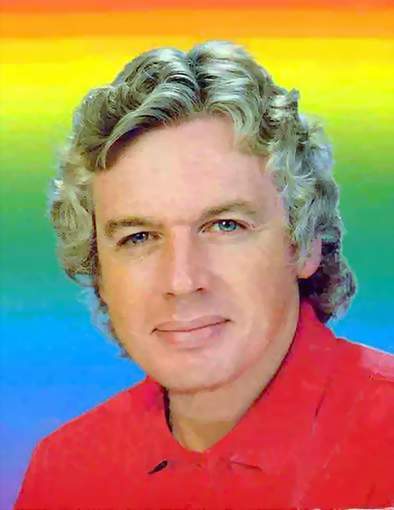 David Icke is already quite famous for being absolutely fucking bazonkers in real life.

However, like all good marketers today, he understands the need to be a complete whackjob online as well.

Alright, bring on the crazy.

Many years ago, David Icke was a man like you or I: he had a good job as a sports reporter, a wife and family, and was active in both political and environmental issues. A case of bad arthritis stopped him from playing professional soccer, but didn’t stop him from visiting a psychic healer named Betty Shine. After that, according to the legends, Icke became a little… unbalanced.

Fast forward to the year 2001: Icke’s fourth book, Children of the Matrix, comes out; weighing in at nearly 500 pages, it is a treatise on, as the author puts it, “How an Interdimensional Race has Controlled the World for Thousands of Years – and Still Does”. It sounds like the premise of a kick-ass sci-fi movie. It’s not, but rather an epic tome on the shape-shifting reptile people, and how they’re pulling strings behind the scenes of the world, and have been since the rise of humanity. Once again, a sentence that sounds like the tagline on a Keanu Reeves flick, but, tragically, is not. He has published honest-to-amphibian tomes on the secret movements of this secret race and their insidious plans to unite the people of earth under a one-world government, which is apparently the worst number of governments to have. Among their numbers include all past and present world leaders and people of power, including George W. Bush, Rockefeller, the Queen of England, and (presumably) even your own mother.

Final Thoughts on the Insanity:

These days, Icke spends his time making obscene amounts of money lecturing, selling books, and updating his website with to-the-minute news on the movements and progress of the lizard folk and the multitude of conspiracies they put forth, so it’s hard to believe that losing his mind was an overall loss. Rather than mock him, it might be better to study him, in order to learn his ways; clearly, he’s doing something right. 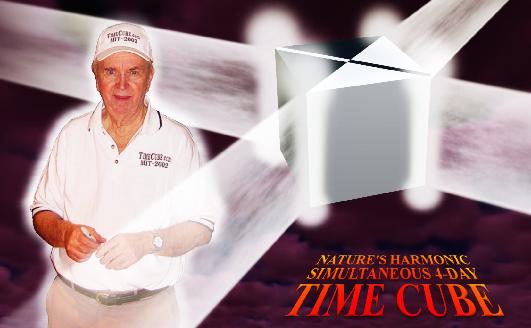 Trust me, I’m a doctor

Gene Ray (or Dr. Gene Ray, as he prefers to be called), may or may not have figured out exactly how the entire universe fits together, a problem which has eluded scientists since the early days of rational thought. We will likely never know which it is, however, because he has apparently decided to encrypt his findings by playing the telephone game with a dozen grammatically-challenged paranoid-schizophrenics.

Alright, bring on the crazy.

The Time Cube theory, which Dr. Ray believes to be the foundation of existence, is difficult to properly explain unless one has studied it thoroughly. Luckily, the founder of this school of thought is here to lend us a hand, on one of the finest educational programs to have ever aired on television:

Yep, that’s all there is to it.

The Time Cube website, linked above, is the most pure and beautiful example of literary absurdism you will likely see all day. When copied into a word document, TimeCube.com spans over 100 pages with more than 11,000 words, where he rants about the evils of academia, God, the Jews, and anyone who fails to acknowledge the truth of the time cube. If the gargantuan colorful text, numerous grammatical, syntactical, and logical errors, and warped-geometrical background don’t give you a headache, the solitary link at the bottom of the will:

There’s a second page to it all.

As best as anyone can tell, the information on the second page is just a repeat of the first, plus a few links to various helpful diagrams (including this exercise in baffling minimalism); adding the second page to the first results in over 18,000 rambling words. To put this in perspective, H. P. Lovecraft’s The Dunwich Horror spans only 17,500 or so. The only difference between the two is that Lovecraft’s universe filled with unbridled horror is known by its author to be entirely fictional.

Final Thoughts on the Insanity:

If you manage to wrap your head around the Time Cube theory and happen to be a professor, you can debate Dr. Ray on the subject; if you manage to convince him that he’s insane, he’ll give you an even ten grand. No word back on whether this would be the easiest job in the world or the hardest.