Home Home The 3 Strangest Cases of Mass Hysteria Ever Recorded

There’s an old saying which that misery loves company. However, as you’ll soon see, this doesn’t necessarily just apply to miserable people: mad panicking people also need friends. Sometimes that madness can spread into cases of mass hysteria. As bizarre as the phenomenon is, what people can end up doing can be stranger still.

There are many events in our day-to-day lives where anger is the only rational response. Whether someone cuts in front of us in line at the supermarket, shoots us fatally just days before our retirement from the force, or drunkenly poops in our mailbox for the fourth time this week, our reaction is always the same. We pump our fists, flex our tear ducts, and have a good long cry session, bottling the anger up until it overflows, typically resulting in a teary Youtube video that will haunt us for job interviews to come. Nothing, however, enrages us like the nonsensical and giddy laughter of overenthusiastic and hope-filled schoolgirls. But what if that very laughter could overtake us, turning us all into giggling vessels of the very contorted sounds that we hate? Well, it turns out that has happened, and it’s terrifying. 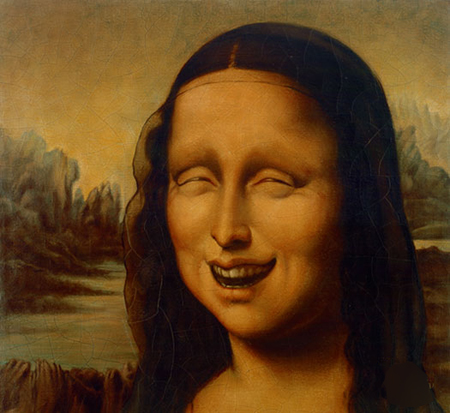 More terrifying than this? Yes.

In 1963,the Tanganyika laughter epidemic struck a tight-knit community in Tanzania with the force of a speeding triceratops crashing into an utterly naked scrotum. Much like every woman we’ve ever even attempted to be intimate with, several girls at a mission school started to spontaneously laugh and cry. Soon, the infectious laughter overtook the community, and 95 out of the 159 children at the school were giggling. In later interviews, we feel free to assume that some students claimed to be merely “LMAO-ing,” whereas some were even “LMFAOROFL-ing.” The school administrators eventually decided, “fuck that shit-we’re sending you kids home.” That decision only made the laughter worse.

Once the children ran home, the laughter infected their communities. More students, and even some adults, were taken over by the laughter. The symptoms consisted of more than “fucking annoying laughter,” too. Some of the worse ones included fainting, breathing problems, random screaming, and rashes. People have been known to laugh to freaking death. Hundreds of victims laughed for entire weeks, and no medical cause could be found. However, it was found that literate adults without religious beliefs were immune to the laughter, which tells us that the evil laughter gods don’t have any power over you unless you believe in them, or something.

Apparently, the school was sued for the epidemic, because the mystery illness that had absolutely no medical cause was clearly all their fucking fault. As we like to say, when the only cure to the pants-shittingly terrifying disease is an education and beliefs grounded in logic instead of superstition, suing the school is just the only logical option available.

Africa is a continent that is worlds apart from North America; culturally, politically and economically. It’s a vast tapestry of nations with a myriad of unique quirks which, while different from our own, can alternately be considered completely and utterly insane.

Take for example the proud nation of Nigeria, whose main exports include oil, scams, natural gas and penis-shrinking terror. Between 1975 and 1977, a horrific epidemic of grand theft genitals occurred in the North African country, perpetrated by unseen and unheard cock bandits. The dong-heists, thought incredibly realistic and horrible in the minds of the victims, turned out to be a figment of the affected Nigerian’s imaginations; though this didn’t stop many from lynching, burning and otherwise brutally murdering the supposed culprits of said penis-theft. While the epidemic slowed to a near halt by the late 70’s, it has returned lately with a vengeance. 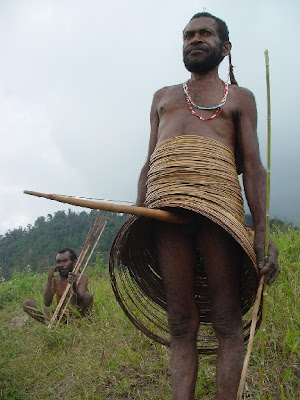 You can’t say they weren’t prepared for it this time, though

In April 2001, mobs in Nigeria lynched at least twelve suspected penis thieves. In November of that same year, there were at least five similar deaths in neighbouring Benin. One survey counted fifty-six “separate cases of genital shrinking, disappearance, and snatching” in West Africa between 1997 and 2003, with at least thirty-six suspected penis thieves killed at the hands of angry mobs during that period. The problem has gotten so severe that men on the streets of Lagos, Nigeria’s former capital, have been seen “holding on to their genitalia either openly or discreetly with their hand in their pockets”.

And it’s not just Africa that’s jumped on the batshit-crazy bandwagon. Incidents of rogue (and imaginary) penis-snatching can be traced to China in 300 B.C, and have since garnered mentions in the Malleus Maleficarum and the Compendium Maleficarum, Medieval Europe’s guide to witches and the dangers associated with them. 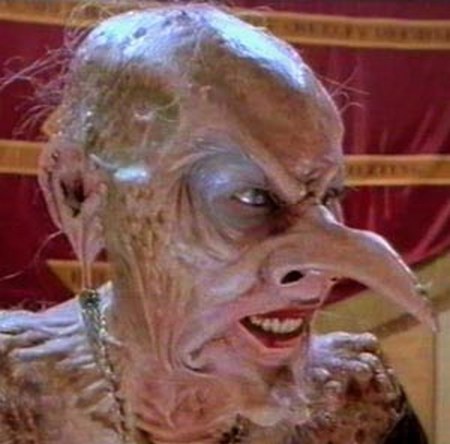 While guys in labcoats with credentials work feverishly to come to a unanimous conclusion on the causes of penis panic, none has been reached yet. And until it has, hold on to your junk.

We here at Weirdworm agree: England is weird. It is almost as weird as Japan. Surreal CGI spokesfreak Max Headroom, surreal British comedy The Mighty Boosh, Monty Python in general. You’d think their serial killers would follow this trend. We wouldn’t be surprised if they follow English women, swear at them, and then stab them in the ass. Good thing, because one killer did just that. And furthermore, he never existed in the first place.

Our research has led us to the harrowing tale of the London Monster in the more innocent time of 1788. We were deeply shocked and appalled by what we discovered. And we quote, with brackets, “[The Monster], did, unlawfully, wilfully, and maliciously, make an assault upon, maim, and wound, Ann Porter, against the peace, &c. A second count charged the said [Scary Monster], that on the same day and year, he did, unlawfully, wilfully, and maliciously, tear, spoil, cut, and deface, the garments and clothes, to wit, the cloak, gown, petticoat, and shift, of the said Ann Porter, contrary to the statute, and against the peace” Horrifying! 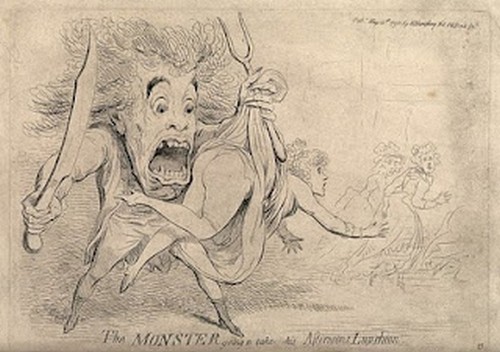 What, exactly, did this man do, unlawfully, willfully, and maliciously? Other than tear, spoil, cut and deface the garments and clothes, to wit, the cloak, the gown, petticoat, and shift of Ms. Ann Porter? She received “a blow on the right hip [To wit, her buttocks, rear, ass, posterior, and behind]” and then “used language so gross, that the court did not press on her to relate the particulars”. Okay. He stabbed a woman in the ass, then swore at her. What next? Well, he was reported to have knives attached to his knees for some reason, and other times he invited someone to smell a bouquet. That had a knife in it. This man truly knew creative places to put knives. 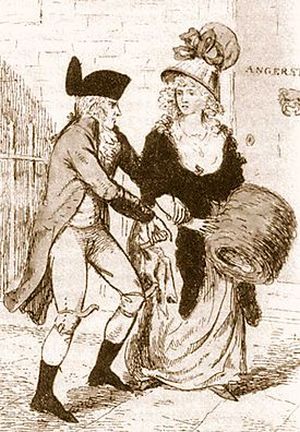 That’s not the worst of it, though. The worst of it was when he turned London into a sort of anarchy for two years. And then that slippery fuck had the balls to not exist in the first place. It was rumored only beautiful women were attacked, as The Monster has a strict “no fat chicks” policy. The ladies of 1700s practically jumped at this knowledge, and began to fake being attacked for sympathy, even sometimes faking wounds.

It got to the point where frightened women began to jumped out of their skin when men so much as scratched their noses in a suspicious way. As such, a No Monster Club was formed, and members wore badges to assure the womenfolk they were not the terrible ass-stabber. The anarchy became infinitely worse, however, as vigilante groups were created to get rid of the monster, and as all vigilantes do, they only managed to beat the shit out of innocent people. Thieves’ jobs were made infinitely easier by the chaos as they swiped wallets, pointed at the man they robbed, and then shouted for help, labelling the poor bastard as the monster. 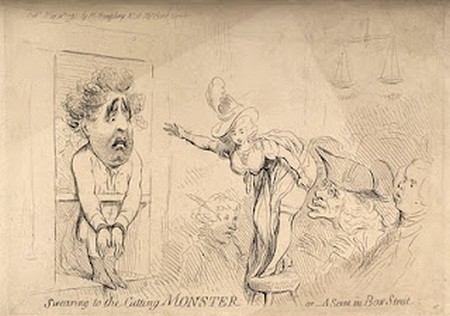 Eventually, Ann Porter, the woman whose ass was stabbed, told her loverboy John Coleman she saw the ass-stabber herself. He followed Rhynwick Williams, some 23 year-old dude, confronted him, then, in a move we wish still happened as a sort of vigilante justice today, challenged him to a duel. Williams did not exactly come out on top, and his day only got shittier.

There was a trial, and some gems include “victims” contradicting each other and co-workers backing up Williams’ alibi for the worst of his attacks, and even one of the “victims” admitting she was never attacked at all. Perhaps Williams’ day was about to get better?

It didn’t. The Bloody Code that was in effect at the time included punishments such as seven years for stealing onions or table linen, defacing clothing was worse than assault or attempted murder. So, despite solid alibis, retarded alleged victims, and evidence that was little more than some unreliable woman’s word, The London Monster, after a retrial that was even more ridiculous, was put behind bars for six years. Did we mention Ann Porter married the man who collected the reward money for capturing the Monster?