Considering the finality of death and the fact that it’s one of the few things all human beings share it’s no wonder that we’re fascinated with what happens afterwards. Since the dawn of history, humans created stories and rituals to deal with death and the dead bodies left behind. Here are just some of the more bizarre rituals from the ancient Sky burial to modern Cryonics. 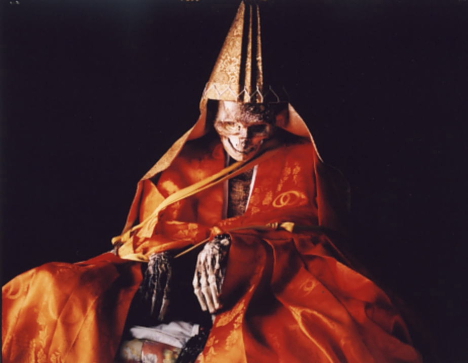 This practice has been discontinued, and only a few mummies created this way have been preserved over the years, however self-mummification (also known as Sokushinbutsu) seems to have been a very widespread practice in Buddhist countries. We know it was very popular among the highest Tibetan monks as well as the Japanese Buddhists temples. Apparently, numerous monks tried to become mummies as it was considered a very high honor, but only a select few managed to preserve their bodies after death.

The ritual started when a monk aspiring to become a mummy entered a strict fast, only eating roots, seeds and tree bark for at least three years. This drastic diet was meant to dry out the digestive system and kill any bacteria that would later decay the body. Just in case the diet didn’t do the trick, the monk would drink a poisonous tea for another thousand days. This poisonous tea was very similar to the substance used to lacquer bowls and caused severe vomiting which dehydrated the body. As a bonus, the tea would make the flesh too poisonous to be eaten by worms. Eventually, the monk would seal himself in a tomb leaving only a narrow air tube, which would also be sealed eventually.

One thousand days after the tomb was sealed, the other monks would open the grave to see if the self-mummification was successful. Most often the body still contained some water or was not toxic enough and the decaying process started despite all the monk’s efforts. However, once in a while the incredibly harsh preparation would pay off and the body was perfectly preserved. Those were considered true Buddha’s and would become holy relics. The others who tried but failed were remembered for their effort but were obviously not holy enough. 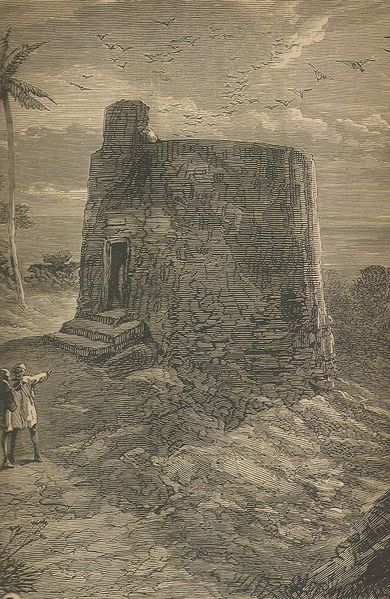 In case the previous entry didn’t convince you, Tibetans have some seriously bizarre burials. Therefore, if any group was going to attempt a burial most people would consider impossible, it would probably be them. To be clear: we’re talking about being buried in the sky. Now, before you start worrying, the name of this corpse disposal method is rather deceptive. If you really want to be picky it should probably be named burial by hungry vultures, but that simply doesn’t sound as cool as sky burial.

This death ritual evolved out of necessity. Since most of Tibet is devoid of trees, cremation is not economically feasible and digging a hole in the frozen ground doesn’t make much sense either. The only solution left was using the sky as a burial “place”, by cutting up the body and mixing it with flour and yak milk in order to attract vultures. This ritual is performed by “body breakers” who are men specialized in breaking the dead meat apart and pulverizing the bone until the vultures will eat every piece of the dead human.

The practice might seem barbaric, but even the Chinese government (who usually forbids religious practices) realized it was the only sensible way of dealing with the bodies of the dead. In fact, forms of air burials have been used at some point or another in almost all mountainous areas, including the Persian Empire. The Zoroastrian religion had special towers constructed where the dead bodies were left for the elements and the vultures. These structures, called towers of silence, can be seen today all over modern Iran and in some parts of India where they are still in use. 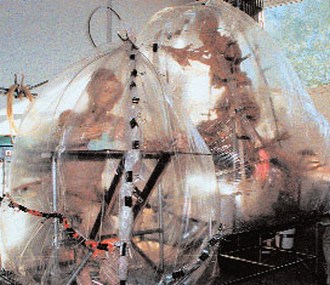 This bizarre ritual is not very widespread and is most common among westerners… in fact, you probably even saw someone “buried” this way. We’re talking about the process that makes you a museum exhibit through scientific mummification.

Started in 1979 by Dr von Hagens, this embalming process eliminates fat and liquids from the human body, replacing it with silicone and other chemical compounds. The result is a corpse that does not decay, yet retains most of the properties of the live tissue. In other words, we create some seriously creepy, anatomically correct statues.

The bodies used for the process come from donors that have agreed to have their body preserved for the sake of science, although individual body parts can come from regular organ donors. The most common usage of the corpses is for teaching medicine, but Dr. von Hagens has also created the museum exhibit Body Worlds which has been displayed in many museums around the world.