The Simpsons is one of the most popular TV shows of all time, and it’s not hard to understand why. From Homer’s unending stupidity to Bart’s madcap antics and Grandpa’s demented rants about good ol’ days that may or may not have happened, there’s no shortage of comedy to be had. But the show’s appeal isn’t limited to the titular family. Springfield is filled with many other bizarre and hilarious characters, and has one of the most fleshed out and detailed casts of any show in history. While less prominent, these characters are nonetheless an essential part of what makes the series so amusing, and we here at Weird Worm thought it was time to salute these unsung heroes of cartoon comedy.

When North Americans think of Scottish people, Groundskeeper Willie is probably the first thing that comes to mind. He could even be argued to be one of the most well-known Scots in the world. We’re not sure what this says about modern culture, but what it says about the character is clear: he’s grrreat, laddy!

Willie may be a bit ornery and a bit too fond of his scotch, but his life revolves around mopping up puke and being the victim of Bart Simpson’s pranks, so perhaps we can cut him some slack. In his shoes, we’d also probably spend most of our time cursing, drinking, and trying to get elected mayor so as to “kill the whole lot of ye, and burn your town to cinders!” Okay, maybe not so much that last one.

Come to think of it, violence comes pretty readily to Willie. He’s said to have spent much of his life wrestling wolves, and there’s also mention of him being the spitting image of the Aberdeen Strangler. So maybe he’s not the most likable character, but he’s still funny.

Matt Groening, the show’s creator, has gone on record as saying that Apu is his favorite character, and when you think about it, it’s easy to see why. His status as a “semi-legal” immigrant aside, Apu is the embodiment of what makes America great. He came to the country as a poor student and has built himself up into a successful Kwik-E-Mart proprietor and important part of the community, pulling himself up by his own beef jerky.

Oh, sure, he may charge much, much more than is justifiable for food that is contaminated with salmonella as often as not, but he does have a wife and eight children to support, so you can forgive him for cutting the occasional corner. He’s also a master of customer service, ever ready with a polite smile and a hearty “Thank you; come again!”

Apu takes all the disappointments, failures, and gun-toting robbers life throws at him and keeps on smiling. It’s this jolly attitude that makes us all love him. 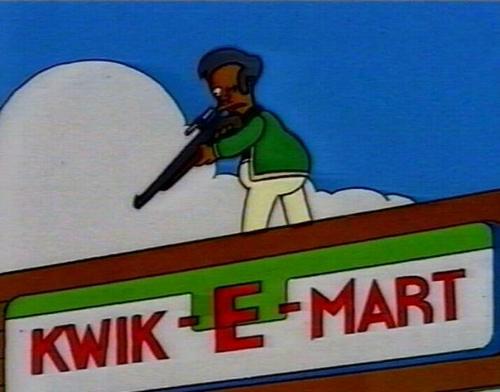 Do not mess with his Kwik-E-Mart.

The quintessential mean boss, C. Montgomery Burns is the man we all love to hate. When he’s not poisoning the planet with his nuclear plant or making life hell for Homer Simpson and his many other hapless employees, he likes to unwind with hobbies such as hunting endangered animals, harvesting organs from children, and releasing his vicious attack dogs on anyone and everyone.

As a boy, Mr. Burns was no less wicked. One of his favorite childhood pastimes was crippling migrant workers, and he is known to have assassinated many of his siblings, and perhaps his parents, as well — though the fact that his mother appears on the show makes this claim a bit unlikely.

Mr. Burns may be despicable, but that just makes it all the more sweet when his evil plans are thwarted. In this era where corporate greed is ruining the economy and the environment alike, Burns is more poignant than ever, so it’s likely we’ll continue to take perverse pleasure from his evil for many years to come.

He really likes the vest.

While he may seem normal on the outside, Flanders is perhaps one of the most bizarre of Springfield’s residents. A lot of this stems from a strange psychological treatment, the University of Minnesota Spankalogical Protocol, he was subjected to as a child, which prevented him from expressing any kind of anger. Instead, he can only express himself through a string of nonsensical jabbering. “Hi-diddly-ho, neighborino!”

After his wife’s death, he went to absurd lengths to preserve her memory, even struggling to maintain her imprint in his bed. He is also freakishly overprotective of his two sons, Rod and Todd, and won’t even let them use dice in board games, claiming they are “wicked.”

Such eccentricities may be why his neighbor, Homer, hates him so much, but it could also be that Homer is simply jealous of Ned’s successes.

But Flanders isn’t all disturbing quirks and frightening neuroses. He’s also a paragon of giving, clean living, and Christian values. In fact, there is a sect of Christianity in the United Kingdom that respects him so much they attempt to emulate him — moustache and all. This is discussed in another Weird Worm article. 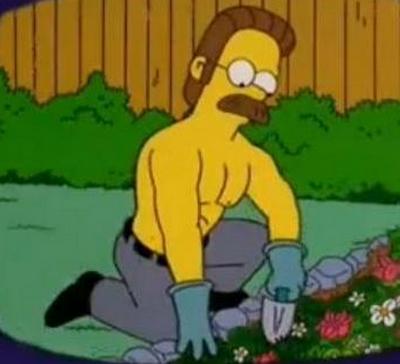 Apparently, all that praying will get you ripped.

Disco Stu is one of the most utterly nonsensical Simpsons cast members, but that’s his charm. He’s an anachronism, somehow managing to survive in the modern era whilst having his entire universe revolve around disco music, which has been functionally dead for decades.

Stu also has an abnormal speech pattern that would put Ned Flanders to shame. Aside from usually involving disco in some capacity, his statements revolve around third person references to himself, odd rhymes, and William Shatner-like pauses. “Disco Stu likes… disco… music.”

Stu is no less colorful in the series’ Halloween specials and other fantasy episodes, appearing as characters such as Discus Stu, Disco Shrew, and Big Band Stu. 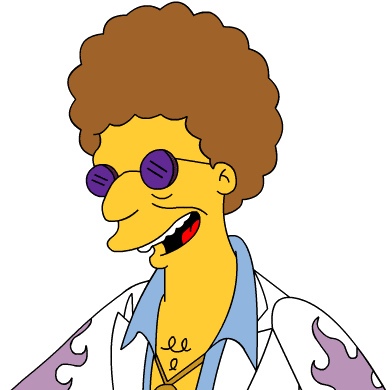 With the possible exception of Lisa Simpson, John Frink is almost certainly the smartest person in Springfield. He is the inventor of many brilliant inventions – such as the flying motorcycle, hamburger earmuffs, and the eight month after pill – and has a hobby of taking airport gift shop toys and turning them into everything from self-tapping dance shoes to deadly weapons.

But no one stays in Springfield without being a little imbalanced, and Frink is no exception. In his case, it’s his eccentricities that hold him back, such as a bizarre fixation with flubber that seems to dominate much of his life. Also, sadly, there is little market for weaponized weasel balls.

But perhaps the most memorable thing about Frink is his goofy, Jerry Lewis-like gibberish, “with the wrathfulness, and the blood rain, and the hey, hey, hey it hurts me!” 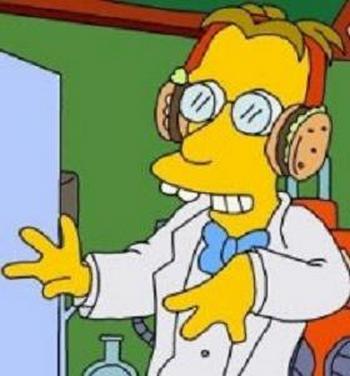