Hollywood lives and dies on creating a sense of realism in its films. That includes brands that the characters actually use. The problem being, of course, that the owners of these brands want to get paid money to be featured in major Hollywood films, especially if the movie is, say, rife with sex and violence and they’re worried about being seen as too offensive by the three people that will actually notice the hero slammed a Red Bull before throwing the impossibly hot actress into bed and making PG-13-rated love to her.

So what’s Hollywood to do? Make up their own brands, of course! They’ve been doing it for decades and, in fact, some of these brands are so established, you might mistake them for actual products. Some of them get featured more often and have a better reputation than regular products. Likes these lovely products: 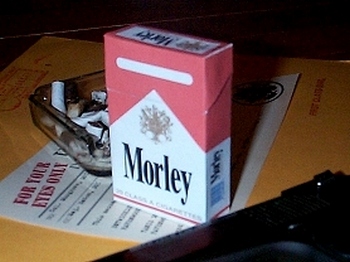 Morley cigarettes debuted opposite the greatest actor, and greatest Canadian, to ever walk the Earth, Mr. William Shatner. He smoked Morleys in “Nightmare at 30,000 Feet”, the original “scared out of your mind on an airplane” thriller that created the oldest joke about something on the wing of the airplane. It was funny, once. No, before the terrorists.

Morleys were forged into existence because cigarette companies paid good money to sponsor television programs and you couldn’t present a sponsor in a bad light. Then, as people realized cigarettes were, ah, fatal, they decided they didn’t want to pay money to anybody who was currently in a public relations disaster, and it’s just kept rolling right like that to today. Probably the most famous Morleys smoker was the “X-Files” adversary the Cigarette Smoking Man. Understandably, there wasn’t a huge rush to sponsor his habit.

On the bright side, at least they’re not Red Apple cigarettes. Butch from “Pulp Fiction” got a pack and was nearly sodomized to death by crazed rednecks. And you thought lung cancer was bad! 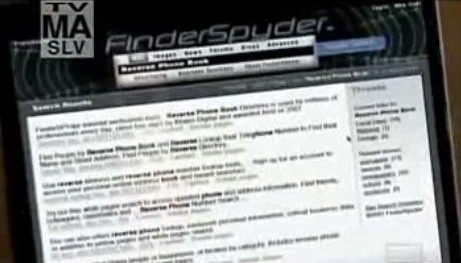 Just like physical products, web programs have brands, and no brand is more popular or more deeply engrained into the public consciousness than Google. Seriously, what search engine do you use, aside from the five guys with the Ubuntu laptop using some program nobody’s ever heard of? Google has become so popular it’s an official verb at this point.

Unfortunately, it’s also five hundred bucks a share, and when you’re worth billions, featuring your brand will cost you accordingly. So instead, they use “Finder-Spyder”, which seems to have a wide variety of skins and styles… ones that change with each show and with each prop master. We can’t imagine why that is, although we suppose Google changes its “doodle” often enough that you can view it as a different search engine every day. OK, that’s not an actual photo of the brand, but Google wasn’t coughing it up. So sue us.

Beer sits somewhere between cigarettes and other products. Yes, too much beer will kill you, although we’re pretty sure the only way most American macrobrews could kill you is if you poured a lot of it into a vat and then jumped in. Hogtied. But it’s also smooth, delicious and consists of about 25% of American advertising because advertising and stupid gimmicks are the only way anybody will buy that pale yellow swill. Seriously, guys? A bottle that turns blue? A unicorn horn on top of a beer bottle?

Anyway, as a result of their brand being valuable and their spending a lot of money on advertising, it’s pretty hard to get a beer brand. That’s where Independent Studio Services comes in. They make all sorts of prop alcohols, but probably the most popular now that they’ve retired Heisler is Penzberg beer. When actors have to pretend drinking, they enjoy a Penzberg, the smoothest of fake beers.