There is always controversy when the umps mess up a call in a sports game. However, when that call doesn’t only mess up a sports game, but also sports history, there isn’t just controversy. There is insane murderous rage.

A couple years ago, there was quite a historic run going on in baseball. Within a span of 24 days, two pitchers had thrown perfect games. That number was about to be bumped up to three when Armando Galarraga was one out away from pitching his own perfect game. Galarraga was a baseball nobody, with a weak record of 20-18 and here he was about to achieve baseball immortality.

Following a caught grounder, Galarraga easily managed to put it away for the final out. 18,000 people were there to witness the final out and baseball history. Actually, make that 17,999 as one man did not see the final out. That man was Jim Joyce, the first base umpire, and he saw the man was safe. 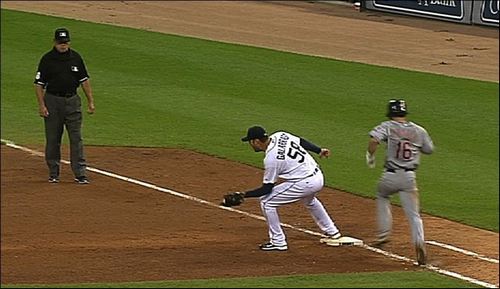 Joyce’s blown call didn’t only start a near riot, (which was a miracle considering they were in Detroit) but he prevented the 19th perfect game in history, the third perfect game in a span of 24 days, and fame and fortune for Galarraga. When anyone else in Galarraga’s position would have choked Joyce to death and receive a standing ovation for it, Galarraga instead responded with the classiest response ever. By not killing Jim Joyce. He instead gave a sad smile and reconciled with Joyce. 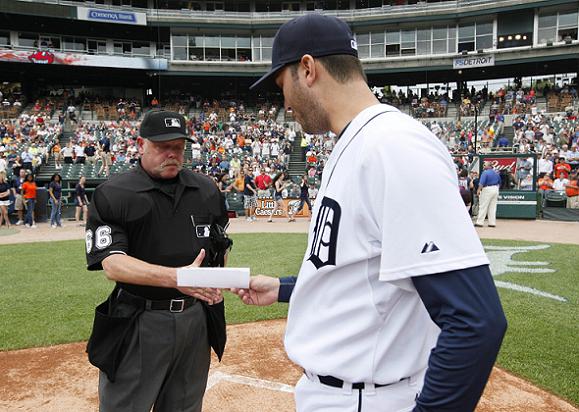 That piece of paper is a free ticket to Colombia for Joyce. To give him a fair head start.

During the 1986 World Cup quarterfinal championship, Diego Maradona of Argentina managed to achieve his two most famous goals of all time within 4 minutes of each other. The first goal was made by Maradona when they were down 0-1 to England. Maradona had a pop up ball that he had a chance of getting into the goal. However, Maradona is only 5’ 5” while the English goaltender was 6’ 1”. To make up for his lack of height he compensated by breaking the rules.

Maradona used his hand to knock in the ball, in what looked to be a clear violation. It wasn’t clear to the referee who called it as a goal. That play later went on to be known as the “Hand of God”. I guess “Hand of Cheating Argentinean” was a bit wordy. 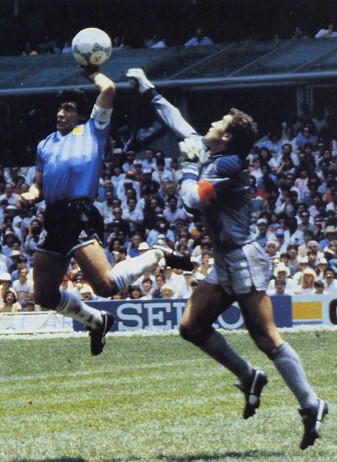 With the next foul Maradona made, which had been voted the greatest goal of the century, Argentina managed to beat England in the quarterfinals and wound up winning the entire Cup. This also started a massive feud between the two countries. Well, it was either that or the earlier Falkland War. Take your pick.

During the 2nd game of the ALCS series, the Yankees were in a slight pinch with the Orioles. They lost the first game and were down one run at the bottom of the 8th. They needed some divine intervention to help win this game and remain hopeful of a World Series shot. Instead, they got a stupid official and a 12-year-old. 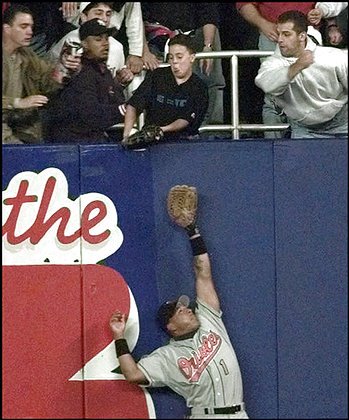 Apparently a 12-year-old who isn’t even potty trained.

Derek Jeter was up at bat and managed to get a clean shot that was at the fences. Right fielder Tony Tarasco got a bead on the ball and was going in for the catch. What he didn’t get a bead on was little Jeffrey Maier reaching out and knocking the ball into the stands.

As an obvious sign of spectator interference, the obvious choice was to rule it as such. However, in a world where there is no replay and the umpires carry the word of God, baseball, umpire Rich Garcia ruled it as a home-run.

Despite outraged Orioles personnel, Garcia stuck to his ruling, which may have been the wisest decision. The only thing more likely to get you killed at a baseball game than pissing off Yankees’ fans during the playoffs is pissing off Phillies’ fans during any period. 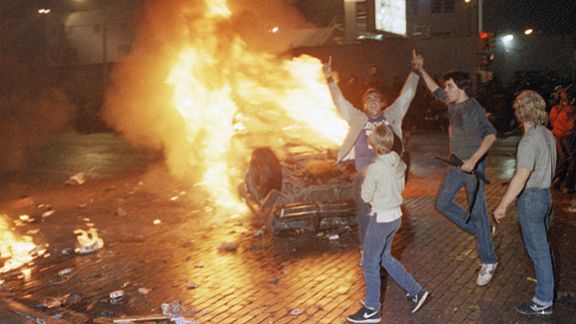 “What do you mean we lost the curling quarterfinals?! Burn everything down!”

The Yankees would go on to win that game, the pennant, and finally the World Series. That was the first World Series the Yankees won in 18 years, but if they lost that game (as was likely), they would’ve been down 2-0, making their elimination all the more likely.

The Toronto Maple Leafs are the Chicago Cubs of the NHL. They haven’t won a Stanley Cup since 1967, but they had their best chance to win in 1993. The Leafs were playing against the L.A. Kings in the conference finals and going into Game 6, they were leading 3-2. They were only one game away from reaching the Stanley Cup finals for the first time in years. However, they couldn’t predict two things from happening. Referee Kerry Fraser and L.A. Kings captain, Wayne Gretzky.

Game 6 went into overtime with a score of 4-4. With literally everything on the line for both teams (The Kings never made it to the Stanley Cup Finals before), Gretzky made a move that would have, and should have ended the game right there: high-sticking the Leafs captain, Doug Gilmour in goddamn face. Instead of time in the penalty box, which should have happened, Fraser failed to see the high stick. 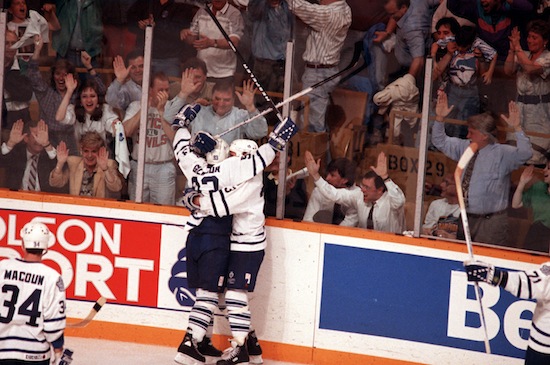 Judging from the hungry faces of the fans, they saw it, and wanted more blood.

As a result, instead of getting the power play that would’ve possibly pushed the Leafs into the finals, they later got slapped with a call of their own and the Kings got a power play. This allowed Gretzky to make the final goal as well as a hat trick. You may not know a lot about hockey, but you definitely should know Wayne Gretzky. He is awesome. 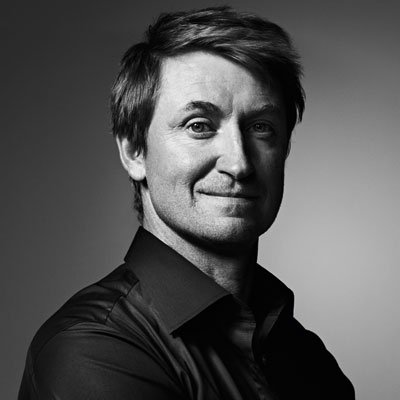 He also has a headshot that would make Johnny Depp jealous.

The Leafs didn’t stand a chance in that game. Gretzky thoroughly embarrassed Toronto on their home turf. In fact, that game is widely hailed as the best game Gretzky ever played. So, instead of what should have happened, Toronto performing in the finals, they instead lose the series and Gretzky gets to play his best game. The Kings would go on to lose to the Montreal Canadiens in the finals. An interesting side note: the Leafs would change divisions next season, meaning that a Stanley Cup finals featuring Toronto and Montreal would never again be possible.

Colorado is granted a fifth down which gives them the win

You may not watch a lot of football, but are you aware that each team gets 4 downs to make 10 yards? Congratulations! You know more about football than the officiators at the 1990 Colorado Buffaloes-Missouri Tigers game.

With only eight seconds left on the clock, it was fourth and goal and the Colorado quarterback, Charles Johnson, spiked the ball. This is when a five-year-old would announce the turnover. Instead, the Buffaloes were given a fifth down, and managed to score the final touchdown. Final score: 33-31 win for the Buffaloes. 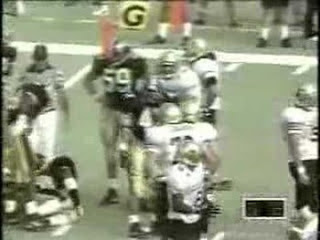 Apparently, 1990 was a time when the earth was underwater.

The game itself was a feat of athletic achievement with numerous students posting great numbers as well as record breaking running yards. Yet, for all that achievements, it was all overshadowed by the final play of the game. Also, it improved the records enough for Colorado so they were able to go on and win the National Championship. As for Missouri, the loss affected their record and they were ineligible for the championship.

When Colorado’s Head Coach Bill McCartney was asked to give back the win by every decent person, he said, “Go screw yourselves.” (Citation needed). 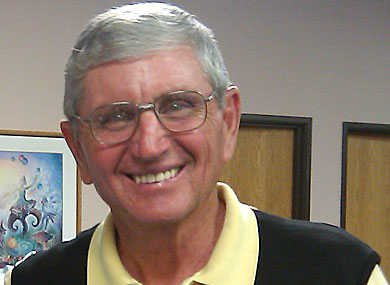 Look at that face. What a dick.

During the 1972 Summer Olympics, two notable tragedies took place. First, there was the massacre that ended with the deaths of 11 Israeli athletes commonly referred to as the Munich Massacre, and two, it was the first time the U.S Olympic Basketball team lost in the Olympics. Ever since the introduction of basketball in the Olympics in 1936, the U.S team has never lost any of its 63 games.

In a twist of fate that makes Hollywood wet with jealousy for not coming up with the idea first, the gold medal final was between the only two undefeated teams in the Olympics: The United States and the USSR. As any conscious American knows, back then was the Cold War and these two superpowers were mortal enemies. At the time, the USSR was mostly done dominating Europe and now they wanted to dominate America in basketball.

With mere seconds left in the final quarter, the Americans were leading 50-49. From there, stupidity took physical form in the officials. The Soviets tried to inbound the ball, but they were unable to make the final score. Nevertheless, the officials gave the Soviets another chance to score claiming that the horn earlier blown meant they wanted a time-out.

On all these retries, the officials kept saying that they needed to add time to the clock because of very flimsy excuses like they mistakenly failed to start the clock when the ball went back in play. On the final try, the Soviets managed to get a layup for the win. Needless to say, the Americans were beyond fury and actually refused to accept their silver medals. 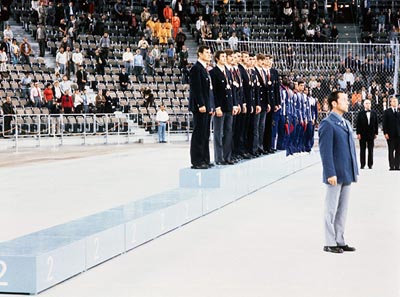 Because just saying to the Soviets, “go fuck yourself would mean getting within talking distance.