In the world of music, a novelty album is an album with a niche market or otherwise limited appeal. Often associated with comedy, novelty albums take on a range of concepts to present themselves as unique and interesting while successfully masking the fact that you’re only going to give it two or three listens tops before it finds itself on the bottom shelf of a Salvation Army store’s musty backroom.

The only thing that good thing to result from John Lennon’s murder in 1980 was that he didn’t live to see 1983 and thus missed the “tribute” album that is the Beatle Barkers. His death, though tragic, ensured that he went to the grave thinking that at the very least his legacy with the Beatles would remain untarnished by, say, a sound engineer with a studio for the weekend and six or seven barking dogs.

Twelve classic Beatles tracks with “vocals” by dogs. If that’s your idea of a good time then you are Satan himself. How you manage to maintain a vinyl collection in the fiery pits of Hell we have no idea, but screw you and screw your dogs.

We live in a world where fictional characters can somehow record music and achieve a level of fame that most non-fictional artists have to struggle for years to reach. One such case is the Smurfs; somehow a group of asphyxiated midgets released several albums-worth of material. Rather than rise up and strike down our music-producing overlords, we bought into the charade, purchasing over ten-million Smurf’s albums worldwide. We’d joke about that but honestly that’s just horribly depressing. 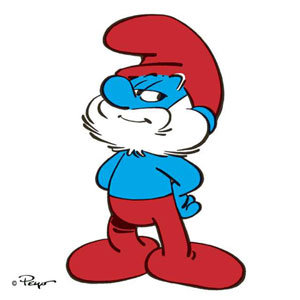 Smurf albums all follow a similar path; take popular songs and ruin it by violently inserting Smurfs references throughout it. For example, do you remember the 1995 smash hit “Boombastic” by recording artist Shaggy? Well here’s something to help you forget:

If you’ve ever been to a sporting event or redneck wedding then you’re all too familiar with “Cotton Eye Joe” by Rednex. The Smurfs decided they also needed to ruin this gem without realizing it was horribly faulted already.

Speaking of strange things to come out of Europe, Caramba was a Swedish supergroup of sorts that released a single album, on which the vocals are complete nonsense. That isn’t intended as a jab to their relevancy or the quality of our Swedish translators but is quite literal: the singer uses a language that is completely made up. Check it out for yourself.

Some people might consider this avant-garde rather than novelty. This certainly wasn’t the first time such a recording was released. Creepy musicians and fans of giant eyeballs the Residents released a similar album entitled Eskimo. However, Eskimo is conceptual, telling the story of an Inuit tribe, and while the lyrics themselves aren’t part of any language they speak through emotion rather than definition. Meanwhile, Caramba is just making noise because someone can’t be assed to string a a few rhymes together.

Perhaps the only recognizable name from the albums credits is that of Michael Tretow, better known for being the producer on ABBA’s records. Suddenly this whole thing makes slightly less sense than it did before. 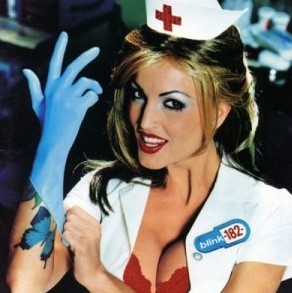 Multi-talented, if you know what we mean.

In 1964, Playboy Playmate Jayne Mansfield wanted share her love of the classical arts as well as much of her cleavage with the world. These desires took the form of Shakespeare, Tchaikovsky & Me, pictured below. 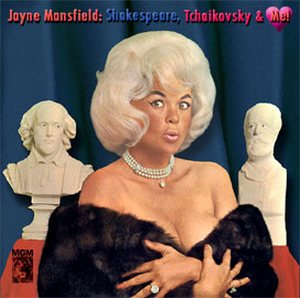 Seriously, what’s happening here? Did she puncture a lung? You can tell she’s trying to be sexy because, you know, cleavage, but she sounds like a mix between “exhausted after jogging” and “sort of mannish.”