Politics can be dirty business. Candidates would often like to call each other petty names (or so we imagine), but things like liability mean you have to keep it classy. Enter the attack ad, which allows you to say whatever you like so long as you don’t directly say it.

These seven ads are among the most memorable in US presidential history. They either had a huge impact on their associated elections or on their viewers.

The ad widely credited as the first direct attack ad, Peace, Little Girl was used by Lyndon Johnson’s campaign in 1964 against Barry Goldwater.

To be fair to Johnson, he didn’t directly say “Barry Goldwater is a madman who will reduce cute children to piles of radioactive ash,” so it may not seem so direct. In fact, the only way the ad references Goldwater at all is through the nuclear countdown, which bears a similar accent to Goldwater. And it wasn’t entirely unfounded, either: Goldwater, who had the tendency to verbally shoot himself in the foot, spoke regularly of the possibility of Vietnam escalating into nuclear warfare, so he sort of set himself up with that one.

The ad only aired once on television but was quickly picked up by the nightly news and discussed across the country. Johnson, of course, won the election, and while this may have been his most effective attack, it was hardly his only.

Just in case the idea of a nuclear holocaust wasn’t enough to get people to the polling stations, Johnson decided to play the “he may be racist by association” card:

This ad never aired on television, presumably because Johnson knew it may have been too much of a stretch for most people to accept. Goldwater supported the civil rights movement but opposed civil rights laws because he believed they were a state issue, which probably explains the Klan support, but Johnson naturally wouldn’t explain that because it’s easier to just go for the damned throat.

We Will Bury You

While Goldwater would later openly resent Johnson’s ads by claiming that candidates should be accountable for what their ads say, he did kind of set himself up with this little ditty known as We Will Bury You. In case the title isn’t enough of a giveaway, know upfront that this is not a happy tale from Mr. Goldwater:

Images of children reciting the pledge of allegiance are intercut with footage of Khrushchev’s famous speech wherein he threatens to bury colonialism with a shovel and to make communists of the West’s children. Certainly chilling for its time, when red-baiting and anti-communist sentiment was at its peak, but don’t worry, patriotic children! Papa Goldwater says he’s prepared. But how can he— 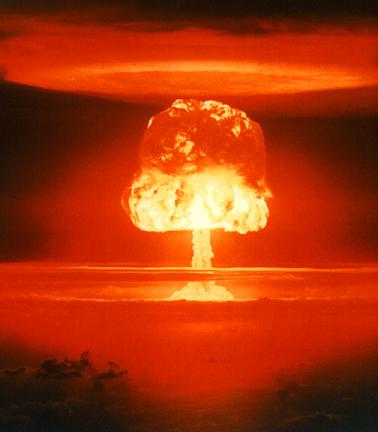 Dukakis was the Democratic nominee in 1988, facing off against George H.W. Bush. The biggest knock against him was the Willie Horton case, wherein an inmate program allowing for weekend releases resulted in the murder and rape of a young couple:

There’s nothing terribly damning here in comparison to the LBJ ads, though it is notably somewhat dishonest: it wasn’t Dukakis’ furlough program (it had been signed into law by a Republican governor before him) but he did veto a bill that would prohibit first-degree murderers from using the program, so it’s just as bad. Perhaps even more damaging was the infamous “tank ad” below:

If you’re trying to figure just what the hell Michael Dukakis is doing in a tank, it was for a photo op for his campaign. A similar stunt had worked for Margaret Thatcher years before, so hey, why the hell not? But as the ad rightfully points out, his opposition to weapons development was at odds with how ridiculous he looked driving a tank. The ad had such a strong impact that the phrase “Dukakis in a tank” has become is used to describe political stunts that backfire.

Reagan’s ’84 campaign managed to pull a political ad first by producing a thirty-minute spot that was both incredibly vague and an incredible mind-screw at the same time. First we’ll just show you the ad:

Here’s a list of things we can specifically take away from the ad:

– There’s someone who is just as strong, if not stronger, than this possible bear. That hunter, of course, is Ronald Regan.

And that’s it. The bear is presumably the Soviets and only the Ronald can stand up to their paws of fury. But what’s amazing about this piece is that it manages to cement Reagan as the de facto only choice in the election without mentioning or even alluding to his opponent. Walter Mondale was seen as so irrelevant that he didn’t even get name checked. Ouch.

George W. Bush’s reelection hinged almost entirely on America’s security, casting aside the usual issues of jobs, the economy and the looming threat of Barry Goldwater’s insanity in favor of reminding people that 9/11 happened on his watch but it wouldn’t happen again. But rather than taking Reagan’s subtle approach with Bears and simply recasting the predatory species, Bush’s campaign realized that some people may not read too deeply into their imagery and spelled it out as clearly as they could:

Okay, it’s not that blunt, but you have to admit that the gathering at the end adds a nice touch of suspense to the whole thing.

1968 will never be remembered as America’s golden year. As the war in Vietnam escalated and more troops were deployed, things at home got worse as protestors became more vocal and violent. To cap this off, the Democratic National Convention had descended into chaos as protestors outside clashed with Chicago police officers. Not exactly a Hallmark moment.

But “Tricky Dick” Nixon, ever the tricky dick, saw a silver lining to this horribly violent rain loud, and rather than simply attacking a single candidate he was able to take a shot at the entire Democratic Party:

In summary: “Democrats have screwed the pooch. Seriously, screw those guys.” But just in case that was too subtle, another ad was directed at Democratic nominee Hubert Humphrey:

Through crafty editing and liberal use of outdated sci-fi movie sound effects, the ad makes Humphrey out to be either happy or amused by the Vietnam War and the ruin in America but never actually says anything at all. It’s like the previous Bear ad if it just showed a shirtless Reagan putting a Kodiak in a half-nelson.