Before Rome was a republic, it was basically a group of cities dominated by someone who had enough balls to call himself ruler of them. We say that they needed to have balls because the job of the king (or emperor or Caesar or warlord for that matter) carried with it significant on-the-job risks, most notably: assassination at the hands of your most loyal followers. Just because the Romans hadn’t gotten around to knocking their rivals in the dirt yet didn’t mean they weren’t violent mofos. Early leaders tend to set precedent. Just like George Washington starting the tradition of serving two terms as a US president, the first kings of Rome started the Roman tradition of leaving office in a body bag. Beginning with… 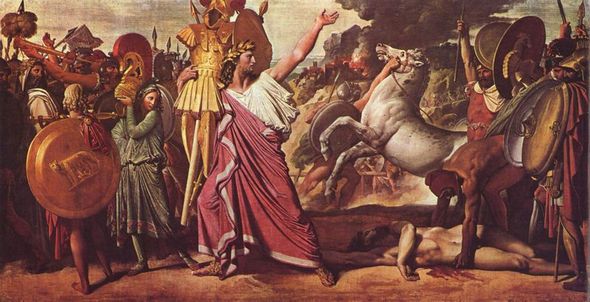 Romulus is most widely known in popular culture for killing his brother. As the legend goes, Romulus began tracing around the Seven Hills of Rome a plan for a wall that would be impenetrable. Remus, on the other hand, was feeling like a bit douchebag that day, and decided to “penetrate” said “impenetrable wall” by jumping over it. In a retaliatory move that can only be classified as “taking a joke way too far,” Romulus killed Remus to prove how much of a point he had.

Among other things, Romulus’ biggest contribution to Rome was his aggressive policy of expanding the population of Rome. Of course, by expanding the population of Rome, we mean having sex with a lot of women. And by aggressive, we mean raping them. Yes, if Romulus was not infamous enough for granting refuge to criminals and runaways in Rome, then the episode of the “Rape of the Sabine Women” probably did not improve his image either. You see, with Rome’s population now overflowing with runaway savages and criminals, Romulus realized that he was missing a crucial piece to the reproduction cycle: ovaries.

Like many of today’s undersexed college students, however, Romulus found an easy way around the “male to the female ratio” by simply inviting a bunch of women from Sabine to a party and getting them drunk. Halfway through the celebration though, Romulus decided to end the party early by claiming the unmarried women as wives.

The King of Sabine, Titus Tatius, quite understandably declared war. His army actually made it into Rome before peace was suddenly declared on the grounds of “bros before hos,” and both kings ruled jointly until (surprise, surprise) Titus was killed by a mob.

None of these actions made for good PR, and one day while making a sacrifice by the River Tiber, a thunderstorm struck. Residents ran for cover, leaving the senators with Romulus by the river. When the rain calmed down, the senators returned – without Romulus. Their excuse? He was swept up to the heavens by Mars in a chariot to join the ranks of the Gods.

Now, we’re not detectives, but we could see this unfolding two ways:

A) Romulus was indeed swept up to the heavens to join Mars, a.k.a. the man that raped his mother resulting in his birth, or B) The Senators were tired of him because he was a complete jackass and murdered him, tossing him in the river.

The answer seems obvious, but public education back then not being what it is nowadays, most Romans accepted a quick explanation by Julius Proculus. Immediately after Romulus’ death, Julius Proculus claimed that Romulus had appeared to him in a vision and was now the god Quirinus. This immediately absolved the senators of any suspected wrongdoing. Case closed. English majors and wordsmiths should already be noticing by now that his name bears striking resemblance to the word “hostile.” It’s no surprise then that this promptly described Tullus’ attitude towards Rome’s neighbors. Quite frankly, Tullus would declare war on a neighbor if they so much as looked at him funny.

Coincidentally, this happened several times during his reign. A rather infamous event involves him declaring war on Alba Longa, a city in close proximity to Rome. Seeing as it would be rather pointless to send over soldiers that were probably brothers to the Alban soldiers, an interesting contest was proposed. Each city would send a team of three brothers to represent their city. They would then be forced to fight each other until only one team survived, bringing victory to their city.

As one would expect, this probably seemed like a pretty good idea to everyone except the brothers. The Horatian from Rome and the Curiatii from Alba Longa were chosen. Could the people of Rome have actually let this horrifically inhumane idea go to fruition? If you know anything about Roman history, the answer is “yes, quite easily, and they probably gambled on the outcome.”

The savage battle was fought until all the Curiatii and all but one of the Horations were dead. Like a schoolyard bet, however, the Albans were quick to call “take backsies” on their part of the agreement and declared war on Rome. Tullus killed them (and even had the ruler drawn by chariots). The Albans also had allies: the Fidenates and the Veii. Tullus killed them too. He also went on to kill several neighboring Sabine tribes, just to let off some extra steam. So strong was his passion for killing, in fact, that Tullus did not quit his rampaging murderess until sickness quite literally forced him to stop.

Tullus did not pay much attention to religious rites, and also didn’t pay much attention to a plague infesting his subjects until he too caught the disease. At this point Tullus, fearing that rumors of divine punishment were true, became a little concerned with his mortal soul and began to pay more attention to his spiritual side. The gods were not to be fooled however and saw through his quickie conversion. Like a gigantic middle finger from the heavens, a lightning bolt stuck King Tullus Hostillius stone-cold dead in 642 BC. Zeus is praised! 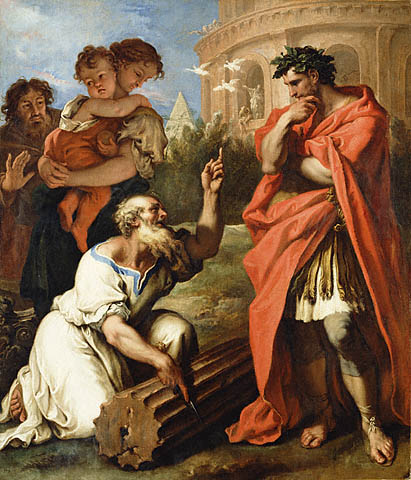 Tarquin the Elder was the father of Tarquin the Proud and was originally from a town unoriginally named Tarquinii. He moved to Rome and established himself in Roman politics. He quickly gained power, becoming so important that Ancus Marcius, the previous king, made him guardian of his two sons.

These two sons, however, posed a problem to him, as they would be the next most logical candidates for the throne upon their father’s death. However, Roman rule was not hereditary, and so Tarquin hatched a plan so devious that even the most respected of history’s villains would curl their mustaches in delight.

When Ancus Marcius died, Tarquin told the two sons that they should hunt while he prepared their father’s funeral. Naturally, while they were away, Tarquin took the time to quickly win over the population of Rome. When the dimwitted duo returned, they were greeted by Tarquin sitting on their father’s throne. Tarquin became king and also won the award for the biggest dick move of the century.

Despite a long and fulfilling life of killing and having orgies, Taquin still had enemies. Namely, the very two sons he conned out of the throne at the beginning of his reign. In one of history’s greatest examples of poetic justice, the two sons of King Ancus hired two (yes, two!) assassins to get the job done. While one approached him from the front to distract him with a discussion, the other snuck up behind him and split his head open with an ax. One wonders how things like axes were cleverly concealed during Roman times. Probably a little sign in Latin that says “this is not an ax”. Again, most people were pretty stupid back then.

However, Tarquin the Elder was a cut above the rest, and this little reenactment of American Psycho lead to the direct ascension of…