There’s something about the music industry that makes every story seem plausible. Sadly, the vast majority of the stories were told about popular musicians simply aren’t true. The ones that are true, however, are pretty wild.

1. Smoke on the Water is Based On a True Story

The only thing I love more than this song is when it’s played poorly by novices!

Much of the song is based on actual events, specifically this part: We all came out to Montreux On the Lake Geneva shoreline To make records with a mobile We didn’t have much time Frank Zappa and the Mothers Were at the best place around But some stupid with a flare gun Burned the place to the ground

In 1971, Deep Purple had indeed set up camp in Montreux to record with a mobile recording studio. Meanwhile, at a near-by Frank Zappa and the Mothers of Invention concert, an over-zealous fan decided to fire a flare gun inside because I guess Frank Zappa just warrants that kind of bad mistake. 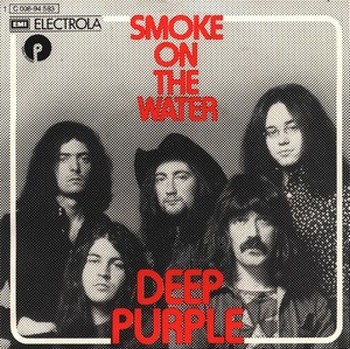 The fire that ensued is further described in the song, having destroyed the entire casino (where the concert was being played) and forcing Deep Purple to take their operation elsewhere. The titular smoke on the water was observed by the band on Lake Geneva. While the night was ruined for all in attendance and most likely caused millions of dollars in damage it did give us one of Rock & Roll’s most memorable songs. There really is a silver lining to every fire hazard.

Love him or hate him, Gene Simmons has a mind for the music business. And action figures. And caskets. And condoms.

But that’s a story for another incredibly awkward day.

In the late nineteen seventies, a friend of Simmons took him to a Los Angeles club to see a then unsigned Van Halen play. Simmons was so impressed with the band that he wanted to get them signed. He took the band into the studio to record a proper demo, which he would then hand off to KISS management who would then, in turn, flip the switch on the “Ridiculous Merchandising Machine.” A license to print crap.

Things were going smoothly until Simmons actually passed the demo over to his management. They were less than impressed, claiming that Van Halen would never make it. Simmons immediately washed his hands of the whole affair and went back to writing songs about his penis. Of course, Van Halen did eventually get signed and “made it” shortly after, and that would be a happy ending if it were the end of the story. However, Gene actually screwed another band in his efforts to sign Van Halen. When he saw their set, he was supposed to be there to see a band called The Boyz. However, Van Halen opened and Gene decided to he had seen enough of The Boyz when he hadn’t seen anything at all. Ever heard of The Boyz? Us neither. 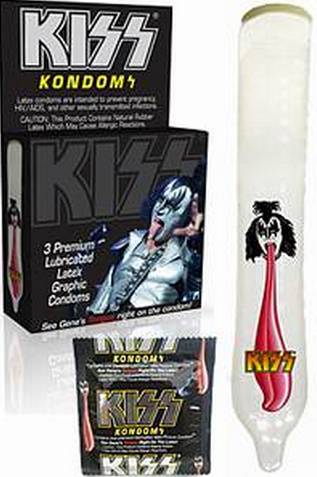 Fun fact: people have sex. Another fun fact: rock stars have more sex than most people. You’re suddenly more attractive when you have your own brand, your own album, your own record label, or your own line of condoms.

While Three Dog Night wasn’t exactly the KISS of their day (that distinction belongs to KISS) they were popular enough to warrant special attention, and one of the bands’ singers, Chuck Negron, loved the attention, regularly making use of the services of groupies. And who can blame him?

Things turned south when his penis had become chaffed and swollen. In his autobiography, Negron recounts thinking this was a good thing and equated the swelling with working out other muscles in the body, proving that you don’t have to be terribly keen on common sense to write an autobiography.

The doctor told Negron no more sex. Being the kind of guy who thinks penis swelling is a sign of physical strength, Negron ignored this, leading to the now-infamous “penis explosion.” According to Negron, his organ split down the middle “like a hot dog” accompanied by a pleasant ripping sound.

Enjoy your next cook-out remembering that.

He was stitched back up the same night and continues to live a presumably penis-happy life. However, the lesson still stands: listen to your doctor, even if you consider yourself a sex god.

4. Guns ‘n Roses Get Famous (After Some Serious Begging)

GnR’s debut album, “Appetite for Destruction,” is fondly remembered as one of the greatest hard-rock recordings in the history of the genre. When you compare it to some of the other albums out at the time it’s a bit easier to see why this is.

They were making it a little too easy.

However, this success wasn’t immediate. The album underperformed by selling two-hundred thousand copies before stalling out. To remedy this, the record label Geffen shot a video for “Welcome to the Jungle” which, if you’ve never seen, is pretty much awesome:

The biggest outlet for music videos at the time was MTV. However, the story goes that MTV didn’t want to have anything to do with the video. Geffen managed to arrange for a pretty awful deal: a one-time showing of the video at five o’clock on a Sunday morning. This was essentially a death sentence for the song since it wasn’t very likely many people would be up to watch it.

Except for that early church crowd.

But the plan was a success. Shortly after the video aired the station received numerous calls asking for it to be played again. It quickly became MTV’s most requested music video and found itself in heavy rotation. Appetite for Destruction went on to sell over twenty-million copies, a feat which MTV was all too eager to take credit for while quietly ignoring the fact that they couldn’t be bothered to give a damn the Saturday before the video aired.

5. A Beatles Album Without the Beatles

Beatles collectors are have been subjected to some pretty underhanded marketing tricks. A quick glance through their discography will reveal that many American record labels had released Beatles records which either contained old tracks paraded as new or live versions or featured the Beatles in a much smaller way than advertising, such as in someone’s backing band. While this tactic of “slap their name on the cover and lie” succeeded in selling records, it did little to actually please Beatlemaniacs.

However, one of the best-known bait and switches was performed by an actual Beatle. Pete Best was the band’s original drummer before they were signed to a label. Before being replaced by Ringo Starr he was considered by the band’s management to be too different from the rest of the band and was asked to leave. After struggling to come to terms with the separation (and having been talked out of suicide at the peak of Beatlemania) Best went on to play in several other bands and release several records. One such record happened to be titled “Best of the Beatles.”

The record was an original recording despite the fact that it lent its name better to a compilation (which, oddly enough, happened with “The Best of the Beatles”). The title was defended as a clever piece of wordplay; Best had been a member of the Beatles, thus the title was entirely accurate (and was proven to be so in a court of law). This did little to curb the frustration of Beatles fans, however, and the album failed to sell as well as an actual Beatles record.