Home Entertainment Reasons Behind the Rapid Rise of TikTok

Among the numerous social media platforms that we know of, TikTok ranks high in the popularity charts. It has more than 800 million active users who go on to show the impact it has had since its conception. The meteoric rise in the popularity of this app prompts one to investigate the reasons that led to this social media platform is more loved than prevailing applications such as Facebook and Twitter. We live in a world where the attention span of an individual is getting increasingly limited. In such a scenario, people are welcoming a platform like TikTok where entertainment is served in a matter of seconds. This is the main attraction that has created an obsessed fan-base for the same.

The history of TikTok:

Let us rewind the clock a few years. In the year 2014, an application named Musical.ly started becoming popular. The idea behind this app was to have a platform where users could lip-sync to videos. This was the brainchild of Chinese entrepreneurs Luyu Yang and Alex Zhu. In 2017, it was acquired by ByteDance which was a famous tech company based in Beijing.

They created the perfect lip-syncing platform and thus began the journey which led to one of the greatest success stories in social media. While the likes of Facebook Messenger and Whatsapp required three years three months and five years eleven months respectively to reach 500 million followers, TikTok reached the heights in just one year and ten months.

The popularity of TikTok can be gauged from the fact that it was the second most-downloaded app in the year 2019 with more than 740 million downloads according to a Betway survey. Despite being a recent app, it stands as the 7th most downloaded app of the decade and overshadows the likes of Youtube and Twitter.

Some of the reasons for its appeal to users: 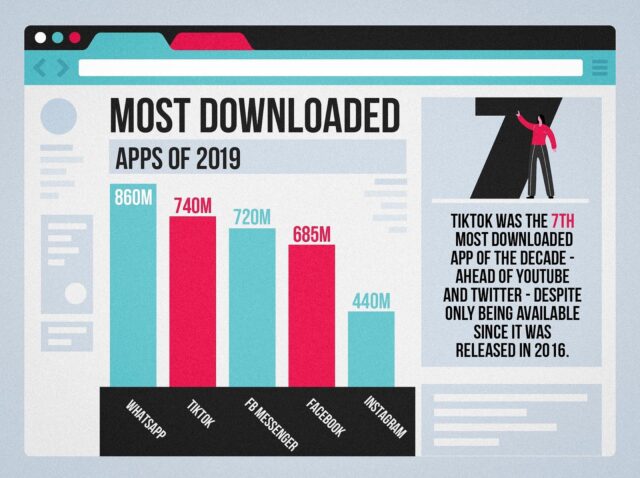 Everybody can be a creator: TikTok enables a user to create something from the comfort of his home. They provide editing tools, audios, filters, and almost everything that you might need to create your content. The videos created thus have the potential to be an outlet for your creative expression. Anyone can be a creator and find an audience for their content if they have a smartphone with this app installed.

Appeal to the Youth: There is a specific target audience for the app TikTok. According to statistical data, almost 66% of TikTok users are between the age group of 16-30. The content is driven largely by targeting the younger demographic of the population. As a popular platform for the young, TikTok is becoming more popular by the day.

Strict Policy Against Bullying and Malpractices: One of the drawing points of TikTok is that they have a very strict policy regarding online security. They deal with all forms of bullying very seriously which helps the platform stay clear of negativity. This also makes the younger population feel safer regarding the usage of this app.

Popular TikTok Stars: Loren Gray, Zach King, Charlie D Amelio, and such other popular TikTok stars earn millions through their popularity. The youngsters look up to these people for inspiration and their content is the motivation for them to participate and try and recreate the same. This has led to the rapid growth of this social media platform.

Presence of Celebrities: Many popular celebrities have a powerful presence on TikTok. They often entertain their fans by taking up a TikTok challenge or by posing their videos. Dwayne Johnson, Baby Ariel, and many other stars are avid users of TikTok and this leads to their fans to download this app in large numbers.

Moving with the Trend: Being trendy is something that is of great importance to young people. TikTok manages to bring out some content or challenge from time to time which becomes a trend. To keep up with this trend, millions join and perform in TikTok. Other social media platforms do much to make these new trending items. Often stars are the ones to device the TikTok challenges as well.

Some catchy TikTok Challenges: TikTok challenges keep changing and many have emerged to be highly popular among the users. The most popular challenge to date is the Renegade Challenge where the user has to perform a 15-second dance which is catchy and challenging. As many as 1.4 billion users performed this challenge. This was closely followed by other popular challenges such as Woah, Obsessed, and Yeehaw’s challenge.

Why TikTok never ceased to be popular?

There are several instances of a popular social media platform losing its charm over some time. Apps such as MySpace and Orkut became obsolete with the advent of Facebook. Currently, even Facebook is seeing a rapid decline in the number of its users with almost a third of its users in the United Kingdom having deactivated their accounts. TikTok, according to experts, is too big to go down shortly. With continuous trending videos, a popular platform for the youth, and the potential to make a star out of a common individual, TikTok is here to stay for quite some time now.

Things to be kept in Mind

Certain things have to be paid attention to in the times to come. TikTok, many have complained is also the cause for creating substandard content. Many use this for obscenity and this can have an ill-effect on young minds. Despite the strong measures that have been adopted by this app, there does exist a lot of hate and racism and some countries like India were even prompted to ban TikTok temporarily.

But the popularity of this app cannot be denied and thus instead of bans, there should be measures to make this a safer platform. There is no harm in a little entertainment and as long as it is not offensive or vulgar, TikTok videos can continue to be popular on social media.

Credit should be given where it is due and the makers of TikTok have taken a lot of measures and put in hard work to make it a grand success. If the safety concerns are addressed it has the potential to become even bigger in the times to come.