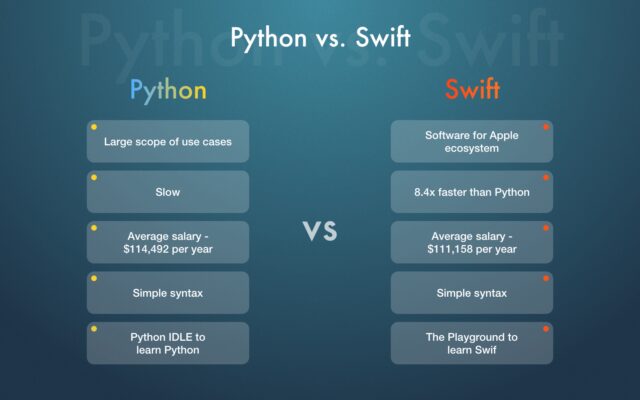 When it comes to the debate between Python and Swift, it’s not just about the coding language you prefer, but the advantages and disadvantages of each.

For developers, understanding how these two languages compare is key to making an informed decision on which one to use for their projects.

Python is a general-purpose, high-level programming language with an emphasis on code readability. It’s an interpreted language, meaning programs don’t need to be compiled before being executed — the interpreter reads and executes them directly.

It’s fast to develop programs in Python due to its use of dynamic typing (meaning variables are not predefined) and robust libraries that expand the possibilities of programming with this language.

It was designed as a scripting language — it was originally developed for automation tasks, software development, web development, and other types of programming.

Since then, it has become one of the most popular languages out there because it’s flexible, fast, and easy to learn.

It’s versatile enough to be used for many different tasks — from simple scripts, data analysis, machine learning, or web development to full-fledged back-end applications. That makes it attractive for developers coming from a variety of backgrounds.

Swift is a modern programming language created by Apple Inc. and released in 2014. It was developed to work with the Cocoa and Cocoa Touch frameworks and the large collection of existing Objective-C code already written for these frameworks. Since then, Swift has seen continuous development and improvement and many iOS applications are now built with it instead of Objective-C or other languages.

It is a powerful language, capable of creating anything from simple apps to powerful frameworks. The language combines the simplicity of Python with the performance required for today’s mobile devices, making it an ideal choice for any iOS development project.

By using Swift, developers will find they can write their apps more quickly than ever before while taking advantage of increased safety features that help prevent certain types of bugs from occurring in their projects. The syntax is easy to understand too, making building mobile applications a straightforward task.

Comparison of Python and Swift

To understand the differences between Python vs. Swift, we need to look at the core strengths that make them unique from one another.

Since Python’s syntax is simpler than that of other languages, it can quickly be understood by beginners as well as experienced developers alike – making it an ideal choice for rapid prototyping with fewer lines of code.

On the other hand, Swift offers greater speed for complex projects since its syntax has been optimized for better compilation times without adding extra features or sacrificing performance during runtime execution.

Comparing Python with Swift also reveals variances in usage scenarios; while Python is perfect for developing desktop GUI applications quickly, it may not be suitable if you’re planning on writing mobile apps or doing web development expecting an appropriate platform or library support in either case.

Whereas with Swift you can be sure that each app runs faster than its python counterpart on all supported platforms making them a great choice when trying to compose multiplatform mobile apps quickly that remain responsive even under heavy loads.

There is no clear winner when it comes to Python vs. Swift. Both languages have their pros and cons, and it ultimately depends on your needs as a programmer. If you need to write code that is easy to read and maintain, then Python is the better option.

However, if you need to write code that is more efficient or faster, then Swift is the way to go.