Generally speaking, commercials aren’t something most people enjoy. They bombard us at all hours of the day from every medium imaginable. Many of them are annoying, and even more of them are for things we have zero interest in. But sometimes the ad-makers get lucky and stumble on a formula that entertains us as it sells to us, and sometimes, they create a character so memorable and likable that we wish they were real just so we could go grab a beer with them—we wouldn’t even mind them selling to us the whole time.

No matter where you stand on the products themselves, no one could argue that Apple has one of the best ad departments out there. They do a supremely good job of convincing us all that their products are the coolest things out there, and that we, too, can be as cool as them once we spend obscene amounts of the money on their gadgets and gizmos.

Apple’s ad department reached its pinnacle with the famous Mac versus PC advertisements, pitting the awkward, curmudgeonly PC against the casual and pleasant Mac. Mac is charming, easy-going, selfless, cool, and ohmygodweneedtogobuyaMacrightnow.

The Most Interesting Man in the World:

If he patted you on the back, you’d list it on your resume. He can fake his wife’s orgasms. Chuck Norris makes up silly facts on the internet about him. He is… the second member of our list.

With his sophisticated demeanor, eternal guitar accompaniment, and epic beard, the Most Interesting Man in the World sends several subtle messages to promote Dos Equis, his beer of choice (when he drinks beer). One is that seeing people queue up for his ridiculous yet awesome stories encourages a person to gather up their friends around a few cold ones and start sharing their own inferior but hopefully still somewhat entertaining stories. Another is that you could never be as interesting as him, but if you drank a great deal of Dos Equis—to borrow from another famous ad campaign—your vomit could smell like his.

In any case, from here on in, we’re all going to feel a jolt of sadness when he see a head of salt and pepper hair nursing a beer in a bar only to discover on closer inspection that it belongs to an overweight trucker with more stains on his shirt than teeth in his mouth instead of that most interesting of interesting men.

That Guy from the Heineken Ads:

This guy is simply awesome. He’s suave. He’s charming. He can out pretend shoot an obese cowboy, he can out kung fu-like nonsense a Bruce Lee look-alike, he gives epic flute solos, and he is the coolest person at what appears to be the party the Most Interesting Man in the World wasn’t interesting enough to get into.

What’s best about this guy, aside from the fact that Asteroids Galaxy Tour seems to provide the soundtrack to his life, is all of the people he knows. Judging from the ad, everyone at this party is bizarre and awesome in their own right, and they’re just the background people at the party where he is clearly the star. They say you can judge a man by the company he keeps, and if that’s so, we judge this guy to be the coolest person since that frozen mummy they dug out of the Alps.

PlayStation’s fictitious VP of Seemingly Everything, Kevin Butler is the cool boss you fantasize about while horribly mutilating a voodoo doll of your current boss.

First of all, he’s a fellow geek and gamer, and better yet, he’s a gamer that tells us all about the latest and greatest games, whetting our appetite for more zombie-massacring mayhem. Add to that his access to awesome stuff like racing game test cars, mind bending multi-TV screens, and strawberry-scented fake TV families, and you have a boss so awesome you decide you’re going to go work for PlayStation—until you realize that Kevin Butler is not real, that working there would be largely just like any other job except you’re probably not qualified anyway, and that you still have to go into your crushingly ordinary job tomorrow morning, and then you get depressed and eat a whole bucket of ice cream.

The “you’ll be cool if you buy this” message is one of the most common in advertising. Technology companies, however, focus on this far more than anyone else, and this phenomenon reaches its apex with the people in cell phone ads.

Whether it’s those pretty T-Mobile girls, the happy dancing iPod silhouette people, or those perky kids from the Rogers ads, no one puts more effort into seeming hip and happy than cell phone commercials. They want you to believe that having a cell phone to keep you connected will make you instantly popular, that you will be cheerful and likable so long as you possess their marvelous wonders of technology.

This manliest of manly men goes far beyond a simple advertisement character. He may have set out to hock body wash, but he has become a hero to people all across the world. Even now, film students everywhere analyze his awesomely nonsensical cinematography, fisherman search day and night for the clam that contains tickets to that thing you love (which are now diamonds), plumbers seek to engineer a bathroom that can turn into a boat that is now a horse, master sculptors commit suicide over their inability to chisel a jaw like his, and scientists in Europe struggle to build a super collider powerful enough to isolate the charisma particles he gives off.

Okay, we may have made at least some of that up, but remember the greatest lesson of the Old Spice Guy: Anything is possible when your man smells like a man and not a lady.

We’re on the web. 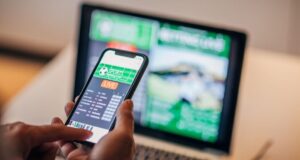