Regardless of how rational we think we are, there are still many superstitions and misbeliefs that guide our thoughts and actions. Ever seen a black cat cross your way? Can you honestly say that it didn’t leave even the slightest tinge of worry in your mind? Exactly!

One of the most popular and common superstitions is the belief that a certain object can positively influence a certain outcome in the most mysterious way, that is, without physically doing anything. These objects are called lucky charms and they can be found in any shape and form, be it numbers, coins, keys, and whatnot.

But before we explore the most popular of these lucky charms, let’s take a quick look at how human civilization has transitioned from an entirely superstitious society into one that is most rational but with a mix of biases.

Before and after the dawn of a rational era

The inclination towards believing in supernatural worlds has always been driving us towards irrational thinking. During the pagan era, people believed in all sorts of different gods depicted in stones, trees, and even natural occurrences like wind and fire. They thought that everything that happened to them was the creation of these gods, therefore, they had to make sacrifices and wear different amulets and lucky charms to win their favor.

Even when the monotheistic religions came into existence and paganic gods were more or less “expelled”, people still continued wearing amulets in the form of a necklace cross or another religious attribute, not to mention the ever-prevalent belief that one god was in charge of everything that happened to them.

With that said, it was a definitive transformation when the enlightenment came into being. This philosophy argues that everything can be explained based on physical laws and if not, it’s because we still don’t know these laws well enough, not because it’s beyond our mortal minds.

But even after this transformation, people are still superstitious to a certain degree. And to demonstrate that, here are the top 5 lucky charms that originate from pagan cultures:

If one pagan superstition can be considered paramount among all others, it’s definitely numbers. Depending on in which society you live in, some numbers will be considered lucky and others not, whereas the same exact numbers can have the exact opposite connotations in different cultures. For instance, in China and France, number 13 is considered lucky but in the United States, you can actually find hotels that completely remove the 13th floor from the enumeration.

Numbers can be used in all sorts of situations with superstitious connotations. Most notably, a bunch of gamblers associates their luck with one specific number. In roulette, for example, a player may pick one lucky number such as 7 or 13 and keep wagering on it for the rest of the night. According to Playamo in real money casino slots, some players prefer to play on 3-reel machines as they believe the number 3 is luckier than the number 5.

There are many different use-cases of these numbers in gambling, as well as in other industries. In the same entertainment industry, there are many novels and movies that are based on mostly unlucky numbers like the movie “1408” and many more.

Coins are also very popular among superstitious people and are often used as lucky charms. In fact, we can also find at least one occasion in our lives when we threw a coin “loaded with a wish” in a pond or something similar.

In the early American cultures, for instance, people would bend silver coins twice to scare off witches, but if you bent it once, you’d attest to a loved person. And just like numbers, lucky coins also have deep roots in pagan cultures, being used by some to win gods’ favor and their blessing for prosperity, while others used coins to curse others.

Pagan cultures have also used keys as the bringers of luck. In an American Hoodoo culture, keys were used to bring people out of bad situations.

In Ancient Rome and other European societies, lucky keys could unlock the future possibilities for a person. In particular, Romans associated the silver keys with Diana – the goddess of the hunt. She was a protector of boundaries and thresholds, and protected people from expectancies.

Even today, you can see some cultures carry on this tradition. On the British Isles, as well as in mainland Europe, you can still see keychains hanging on doors, alongside some hang stones.

While stars aren’t as tangible objects for us as coins or keys, they still have an important significance in a superstitious person’s life. Even not predominantly superstitious, we still associate a certain amount of luck to the stars, ultimately thanking them for our success.

Lucky stars have been prevalent in pretty much all cultures and societies. And it’s not just the fact that they’re in the sky – in a place where “transcendental beings” dwell – that we associate some kind of a mysterious meaning with the stars. The popular star depiction as an object with five lines and points was used by many pagan cultures to represent four natural elements and the ultimate logos – the god or the self.

And last, but certainly not least, the legendary horseshoe. You can come across a steel horseshoe hanging over pretty much every door in villages, which shows how popular the lucky horseshoe talisman really is.

Lucky horseshoes have a different origin than the previous lucky charms. Instead of pagan roots, it originates from the Christian tradition. According to the tradition, Saint Dunstan – an Archbishop of Canterbury – nailed the devil’s hoof with a horseshoe and only removed it after the devil promised not to enter places with a horseshoe hanging over the door. Not bad for bad luck and mishaps, right?

So, if you hang a steel horseshoe with the open end downside, you’ll prevent evil spirits from entering your home, or at least that’s what the legend says.

3 Top Religions and Their Stance on Games of Chance 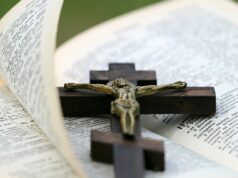 2 Main Reasons why the Bible is against having fun