Grigori Yefimovich Rasputin is an infamous character, the lecherous Russian mystic whose life sparked controversy and tragedy. He was a man of contradictions, and opinions on what precisely he was are still sharply divided – was he a holy man with miraculous healing powers, or a charlatan who preyed on the suffering of the powerful? History has left him an enigma, and much of his historical record exists in the form of personal accounts and first-hand correspondence, which are unreliable at best. He was larger than life, in a sense, and a supernatural character. As such, historical fact, myth, and rumor all intersect in various tales of his life, and the line between fact and fiction is not always clear. What is certain is that he was very much a real man and that his death and the rumors surrounding it are bizarre beyond expectations. However, to understand the nature of his murder, we must first understand the man himself and the implications of his life.

Rasputin was born in the desolate and freezing region of Siberia around 1869, a world away from the imperial capital. Apocryphal stories state that he exhibited extraordinary powers even at a young age, though there is no concrete evidence to back this up. For instance, one story recounts how Rasputin’s father had a horse stolen, and Rasputin was able to identify the culprit through divine knowledge.

Regardless of what his early childhood looked like, it is known that he moved to Verkhoturye Monastery when he was around eighteen years old. This was a transformative experience for him, and when he returned home he claimed to have seen a vision of the Virgin Mary. This set him upon the path of the religious wanderer, and so began his travels. His renown grew in the Siberian peasant villages as an eccentric holy man with healing powers. In 1903, he finally arrived in Saint Petersburg, where his reputation as a faith healer grew to further heights. 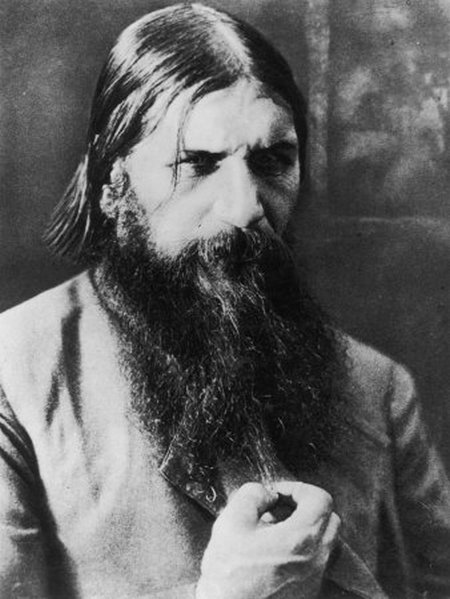 At this time, Russia was ruled by Tsar Nicholas II. Together with his wife, Tsaritsa Alexandra, Nicholas had only one son: Alexei. Alexei suffered from hemophilia, a group of hereditary genetic disorders that inhibits the body from clotting blood. As such, he suffered from frequent bleeds, both externally and internally. Doctors insisted that the boy would die, and in her desperation, Tsaritsa Alexandra turned to Rasputin to heal her son.

Astonishingly, Rasputin seemed able to help the boy. Each time Alexei suffered a bleed, the Tsarist family would send for Rasputin, and the boy’s condition improved. Whether this was divine healing through the power of prayer or a practical result of Rasputin’s presence is a subject of debate. Rasputin gave the family much advice that would logically improve the boy’s condition.

For instance, he suggested that they not give him Aspirin, a new medication at the time that his doctors were using. Doctors now know that Aspirin thins the blood (which would increase the severity of the boy’s bleeding), but at the time this was not well known. Similarly, Rasputin advised the family to keep doctors away from him and let him relax, which would have decreased his stress level and, subsequently, his health problems.

Regardless, what’s important is that the Tsar and his family considered Rasputin a personal friend and a great holy man, and soon rumors swirled that he held a strong influence over the family, even perhaps a sinister domination. Public opinion was sharply divided. Many considered Rasputin a dangerous man with undue power over the ruling family. Others considered him a holy man of extraordinary talents, despite his rather unorthodox lifestyle. Rasputin, you see outwardly displayed behaviors that were not at all what one would call “holy”. For Rasputin, the notions of sin and repentance were interconnected with salvation, and the latter could not exist without the former. As such, he willingly and openly sinned, living in a perpetual state of seeking repentance and humility for the sins he committed.

In his case, this manifested itself primarily through drinking and sex, and his reputation for both was far-reaching. Stories raged across St. Petersburg of his exploits, including charges that he’d raped a nun and seduced the Tsaritsa Alexandra herself. The Holy Synod, a powerful group of bishops in the Orthodox Church, frequently attacked him, but many of these accusations are likely untrue, as Rasputin was under 24-hour surveillance by the police because he was a court official. The surveillance notes, the most famous set of which being the “staircase notes”, are not only a matter of public record but were published in the newspapers of the time. 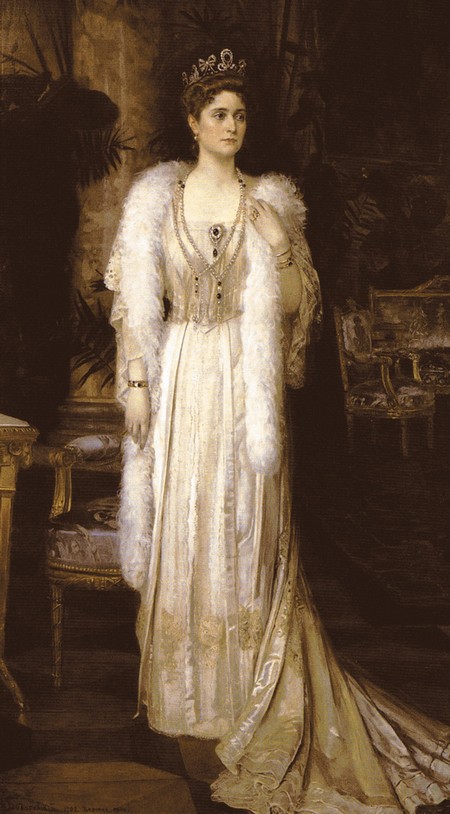 Rasputin’s influence would prove itself when Russia entered into World War I. He predicted that the Russian armies would be defeated unless the Tsar himself personally commanded them on the front lines, and the reluctant Nicholas marched into battle unprepared, which would prove devastating. While he was away, Rasputin became Alexandra’s most important adviser, even convincing her to appoint people of his choosing to positions of political power.

Furthermore, Rasputin was outspokenly against war, both because it was a sinful, hateful endeavor and because it invited political disaster. He became infamous for public anti-patriotic displays at court, and openly accepted bribes from those who lobbied him for assistance. He cavorted with high ranking noblewomen in exchange for political favors, even further increasing his political clout.

Meanwhile, the Russian economy was crumbling and the tide of public opinion was turning against the Tsar. Alexandra herself was of German descent and was accused by some of being a German spy. While the Tsar was away at war, Russia was being run by a drunken, lecherous monk and a German woman. It was easy to attack those two for the complex and unfortunate situation in Russia, which was certainly a result of far more than the actions of two people. After all, the empire was in the midst of World War I. Still, Rasputin was a convenient scapegoat. 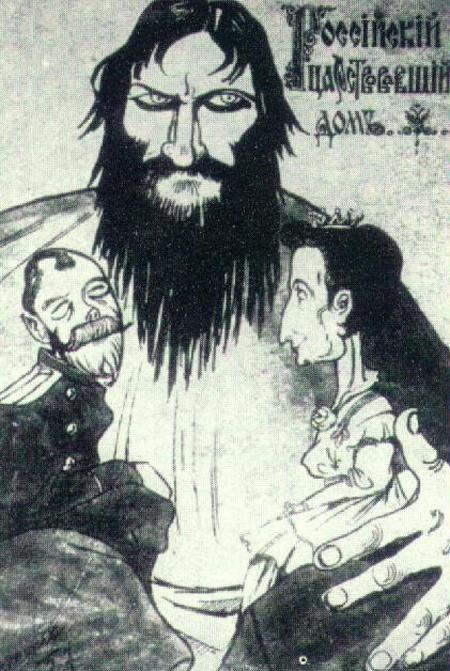 4. Not an Easy Man to Murder

Two attempts were made on Rasputin’s life. The first demonstrates his quickly eroding reputation; the second is the stuff of legends.

In 1914, Rasputin was visiting his family in Pokrovskoye. There, he was suddenly attacked in the street by a woman named Khionia Guseva, a former prostitute. Guseva was part of a kind of support group for women who had been hurt by Rasputin in the past, a group that formed at the urging of a man named Iliodor, a former monk known for his violent anti-Semitic speeches that had become appalled with Rasputin’s remarks against the royal family. She cut him across the stomach, causing his entrails to spill out, at which point she yelled, “I have killed the Antichrist!”

Rasputin, however, was not such an easy man to kill, and after extensive surgery survived the attempt.

Two years later, a much more concerted and planned attempt was made on his life, this one ultimately successful. A group of nobles led by Prince Felix Yusupov decided that Rasputin was far too dangerous a figure to live, and invited him to a fictional get-together for friends of Princess Irina Alexandrovna. There, they served him cakes and red wine laced with massive amounts of cyanide.

Supposedly, there was enough cyanide in the refreshments to kill five men, but Rasputin was completely unaffected. Later, his daughter Maria would suggest that he had not eaten them at all, as he avoided sugary foods. Some believed him to be immune to poison entirely, having taken small doses for years to build up immunity.

Regardless, he was unhurt. Yusupov became concerned that he was not dying quickly enough. If he died too late in the evening, they would not have time to hide the body. He went downstairs where Rasputin was and shot him in the back with a pistol. Rasputin hit the ground, unmoving.

Later, Yusupov returned to the residence to retrieve his coat and check on the body. When he entered the room, Rasputin still lay unconscious, but suddenly opened his eyes, lunging at Yusupov and whispering, “you bad boy” as he tried to strangle him. The other nobles ran into the room, firing pistols at Rasputin. He was hit three more times, and fell once more.

Rasputin was still breathing. What’s more, he was attempting to stand up. It seemed poison and bullets could not stop him, so the men clubbed him, beating him horribly. Then, for good measure, they cut off his genitals.

Rasputin’s body was tied up, rolled into a carpet and tossed into an icy river. Remarkably, upon hitting the icy water he struggled, breaking his bonds and escaping from the carpet. Despite all this, he was still alive. He clawed feverishly at the ice but drowned in the river.

It was confirmed in his autopsy that he had indeed been poisoned and that he shouldn’t have survived that alone. There was also water in his lungs, confirming the story that he had been breathing in the water, and his death was ultimately ruled a drowning. 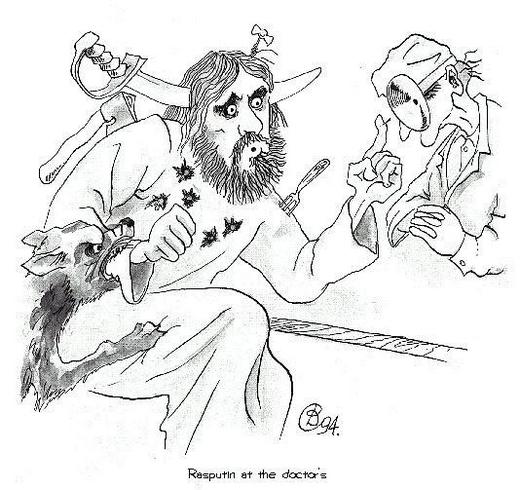 5. What of Rasputin’s Penis?

Remember, Rasputin was castrated. Remember also that he was renowned for his sexual prowess. Rumors floated about that his penis was extraordinarily large, and after his apparent sexual mutilation a bizarre story surfaced as to what ultimately became of his genitals.

Supposedly, the severed penis of Rasputin was found by a maid at his murder site, who kept it. In the 1920s, it ended up in the hands of a group of Russian women who had moved to Paris, who revered it as a sexual fertility charm. Eventually, Marie, Rasputin’s daughter, learned of the women and demanded that the penis be returned to her. She kept it throughout her life with a collection of Rasputin artifacts until her death in 1977.

After Marie’s death, a number of her items were sold, including a velvet pouch with some of her personal manuscripts. The man, who bought this package, Michael Augustine, found the penis tucked away inside the pouch as well. He attempted to auction off the item, but officials soon realized that the dried-out “penis” was not a penis at all – it was a sea cucumber. Had the real penis been switched at some point? Were the women in Paris worshiping the sea cucumber and not a real penis all along? That one is left a mystery.

However, in 2004, a man named Igor Knyazkin, a researcher at the Russian Academy of Natural Sciences opened an erotica museum in St. Petersburg. On display, there are a number of Rasputin’s personal letters… and his preserved, 12-inch (or 30cm) penis. Kayaking claims to have purchased the penis from an anonymous French collector of obscure artifacts and says that merely looking at the penis can cure men of impotency. A picture (probably not safe for work) of the preserved organ in question is available here.

This does beg many questions, of course. Who was this anonymous collector? Why was the penis preserved in liquid for so long? Perhaps answers to these questions will come in time, but it’s remarkable to even consider the fact that even now, developments regarding Rasputin’s death and body are still happening, being discussed, and being debated.

4 Strange Curses in the Bible

The Five Worst Fathers in the Bible

3 Things To Note About ZTE Being The Leader in 5G...