So there you are – sitting in class or perhaps attending a meeting with your co-workers when it hits. By “it” we mean any number of potentially offensive, gross or smelly bodily functions. If you are reading this and happen to be human, then chances are you’ve found yourself betrayed and embarrassed by these natural functions at some point. Perhaps it was a loud burp, a messy sneeze or the urge to urinate during the best part of a movie. Or maybe it was just a nice wet fart you let slip out while standing in a crowded elevator.

She seems strangely proud of herself.

In order to not become a complete social outcast (because, frankly, who can afford the increased internet usage?) many of us have created personal techniques and ways to hold off our natural bodily functions. However, the case can be made that holding it in isn’t always the best way to deal with such matters. Don’t get us wrong, we’re not condoning you go around freely grossing out the planet with every last gas and liquid you can spew from your body. We just want to warn you of the possible issues of holding it in. 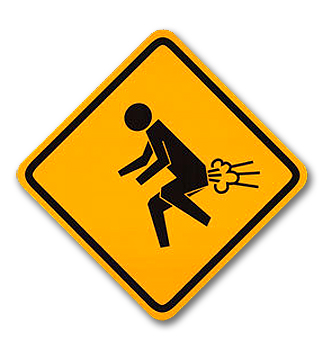 To capture your full and undivided attention we figured we’d start with flatulence. It’s an age-old dilemma; what does one do when you have to let loose in public and there isn’t a dog around to blame? Well in such a scenario the best method is to simply excuse yourself in a subtle and cool Bond-like fashion. In other words, just head to the nearest bathroom and release your rancid blast in a place where it is appropriate.

The next best thing is to simply clench your cheeks together as tight as humanly possible and hope for the best. If you are a guy perhaps you can think of everything you’ve ever seen on the HBO show Oz.

Yeah we know it’s been off the air since 2003, but the dark memories just won’t fade.

So the question is; what are the risks of holding in all those room-clearing stink bombs? According to Doctor Levitt, a gastroenterologist, some side effects from holding in a gas can include dizziness and headaches. What’s more alarming though is that your colon can also become “bloated”. What can a bloated colon lead to you ask? Doctor Levitt believes that the restricted methane and lethal gases could increase toxins to your blood which can potentially poison you. If you’re thinking that seems like a bit much then you may be right. Other doctors have been noted as stating that holding in farts will not poison you as they are a natural element of your intestinal contents.

They claim that the worst you may face from fighting off flatulence is stomach aches from the gas pressure. So there you have it. The next time you hold one in, just know that you’re gambling with stomach cramps or the deadly possibly of poisoning yourself. Depending, of course, on which doctor you actually listen to.

This is a bad habit which many of us likely develop at a young age. It can happen as a result of being that kid in elementary school who accidentally blows snot all over the back of the head of a poor kid who sits in front of you. Unable to live down that humiliation you vow to never again allow air or mucus to flow freely from your nose in public. Thus you begin stifling your sneezes by pinching your nose every time the urge remotely hits you.

Yup, you’ve got life all figured out!

Now allow us to tell you why you are an idiot. The problem with stifling your sneezes has been addressed by several doctors over the years. Here’s what a physician from the University of Alabama, Health System Web site had to say about the matter. Suppressing a sneeze can be harmful, particularly to your ears. Studies have found that the air expelled during a sneeze travels at an amazing 100 miles per hour. The doctor went on to state; “By clamping your mouth closed and pinching your nose shut, you force the sneeze into the eustachian tube (which connects the back of the throat to the middle ear) and then to your eardrum. Sneeze strong enough and you could rupture an eardrum, causing acute pain, infection, bleeding, and even hearing loss.”

Basically, if you are pinching your nostrils shut, you are blowing air back into your nose ridiculously hard. This is sort of like the Valsalva maneuver, which you may know as that thing people do to relieve pain in their ears caused by rapid change in elevation. However, the problem with this maneuver is that it increases pressure in the chest, briefly blocks blood flow entering the heart and causes a sharp fluctuation in blood pressure. This type of behavior could possibly cause an aneurysm to rupture. In other words, just sneeze into the crook of your arm and be prepared to sneeze like a normal human being.

We’re going to guess that by now you see a reoccurring theme happening. When your body wants to do something natural such as pass gas or sneeze, it’s probably in your best interest to just let your body do its thing. This is pretty much the case with vomiting as well. Obviously, hurling last night’s dinner into the toilet isn’t necessarily the most fun thing to do. In fact, it ranks right up there with hammering nails into your face or watching a Wendy Williams marathon.

We imagine this show airs 24/7 in the bowels of hell.

The problem is that nausea and vomiting are symptoms of the actual cause so holding back won’t help you very much. If you feel the need to throw up that clearly means something is wrong. So whether it is food poisoning, motion sickness, the flu or just the aftermath of an awesome night out, we don’t suggest holding it in. In fact, doing so may lead you to suddenly doing it anyway. Except by then, it’ll be at a time or place you’d rather not become a walking fountain, such as while out on a first date or perhaps at a job interview. Good luck getting a call back in either case.

For those of you unfamiliar with this term, it basically refers to a prolonged state where your manhood is at full attention and ready to storm the beaches (by beaches we mean vagina). However, when the mission is canceled for reasons which we are likely unable to comprehend due to a lack of blood to our brain… that’s called “blue-balls”. Ladies, we’ve been telling you for years that there’s nothing worse than leaving a dude with blue-balls… but thankfully now we have the science to back us up.

You can tell he’s the real deal because he has a white lab coat and a syringe.

Blue-balls is a real condition. It results from excessive blood flow to the penis and testicles which causes them to swell up. If for whatever idiotic reason a man cannot “complete the mission”, there is a buildup of pressure and the balls end up getting the worst of it via a dull aching PAIN. It’s called blue-balls because the blood that slowly builds in the scrotum loses oxygen and can give testicles a smurfy blue tinge.

Smurfette knows all about this particular subject. 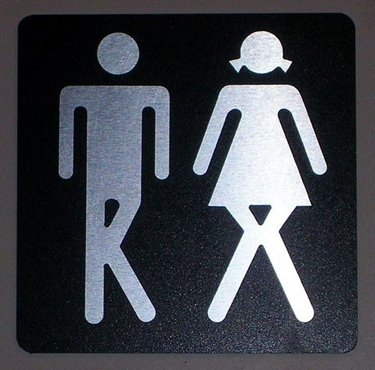 While it’s normal and healthy to be able to hold off from peeing constantly, some doctors would suggest it’s actually best to flush your bladder every hour or so. Realistically, of course, this simply isn’t something we tend to do. 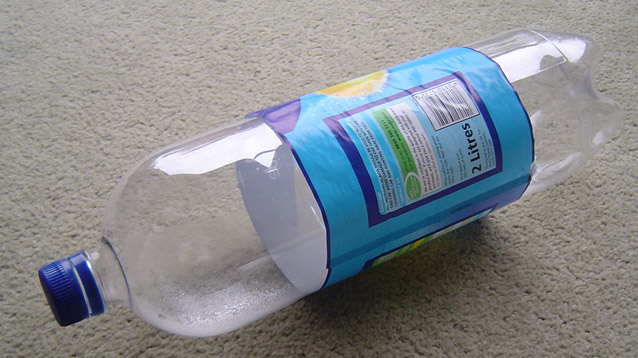 If you really do have to go that much we suggest carrying one of these around at all times.

Think about those times you are in bed, sleeping like a baby on sleeping pills. If you are in a comfortable enough groove, you’ll deal with the pain of having to go until the sun rises and it’s time for your bladder to explode. However, what is the real dangers of waiting to urinate for long periods of time? Well, should you get into a habit of stretching out your waiting time you could weaken the muscles in the wall of the bladder? As it stands, problems with your urinary system can (and will) be caused by aging, illness, or injury so you really don’t need to help it along. Holding urine for extended periods of time can also be especially problematic for women as doing so can potentially cause urinary tract infections. Fun stuff!

The moral of the story…just let your body expel its grossness. And remember to clean up after yourself.