Back in the olden days, people would sit around their living rooms, light up fancy cigars and talk about the future. They’d also try to guess what color looked like, given that everything was black and white, but I’m getting sidetracked now. Back to the future, people.If you were to somehow travel back in time to tell these olde-timeys that the future would forgo flying cars in favor of men made of metal, they would probably guffaw, call you a chowder head and adjust their suspenders before heading out to the talking picture show with their best dame Beatrice. But the future is now, and now is robots. Most of the robots we build serve an explicit purpose, like building cars and reemploying the people who used to build cars. Others, however, manage to operate on a second level. That level, dear reader, is one of terror.

Some robots are designed to kill human beings. Others are designed to kill other robots. But when there’s nothing left to kill, what do we do with our robots? We make them play sports. TOPIO began development in 2005 as a humanoid robot designed to play table tennis. Built by a Vietnamese robot firm, TOPIO confirms at least two things for us: mankind has run out of useful things to do as a whole and Vietnam has robot firms, apparently. 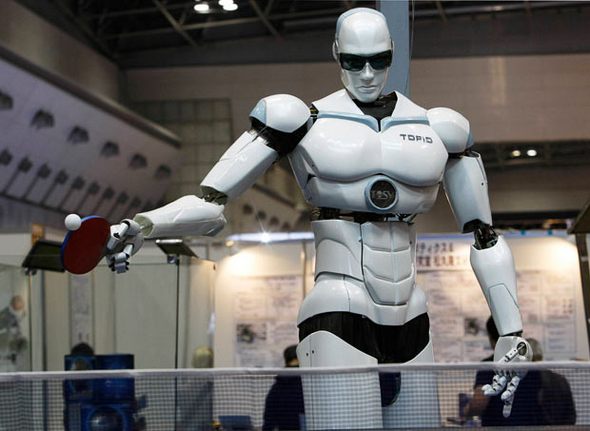 Is this part of the T-1000’s vacation slides? If the goal of TOPIO was to build a robot that would mindlessly play a tier-three sport and not cause those who see it to cry out in fear, then mission failed. The shades say “I’m going to kill you, fleshbag,” while the jacked physique says “No, really, I’m going to kill you. And no one’s going to stop me because the laws of men don’t apply to a machine. If you’d read Issac Asimov in high school you would have known that already.”

If the past is any indication, humankind as a whole will someday get bored with robots. We tend to latch onto new technology pretty quickly, find ways to make it more useful, then try to expand on it to make it more efficient. Rather than let the linear passage of time take its course, someone peered into the mists of the future, saw people having sex with robots and made it a terrifying yet slightly arousing reality.

Roxxxy True Companion sells itself as “the world’s first and highest quality sex robot doll.” To break that down a bit more, Roxxxy is a machine that you’re supposed to stick your penis in, but its okay because it looks sort of like an actual lady and not your mother’s vacuum cleaner hose. The folks at True Companion spent two and a half years making Roxxy as realistic as possible, from the feel of her skin to her ability to have orgasms. At least, the website claims she can simulate real orgasms. I can happily live out the rest of my days without confirming whether or not that’s true.

Because spending precious years of your life developing a sexbot that looks like a crime scene victim might come off as a little weird, the development team also gave Roxxxy the ability to carry conversations, change personality and to fill the emotional void in your life as well as the physical one. But Roxxxy costs upwards of seven thousand dollars. Would you buy a sex robot for seven thousand dollars just to talk to it? Of course not. That’s like drinking a Tanqueray without first putting a diamond in it. Roxxxy was made specifically for the refined sexual deviant who wants to have sex with a highly sophisticated piece of machinery but doesn’t want to admit that to any of his friends.