The current food processing system is truly a modern marvel, when you think about it. Yeah, you have to pay extra for fresh, and only recently have the big food processors discovered people actually really like their food to taste like something that isn’t chemicals. But on the other hand, we’ve created a massive industrial system to grow, process, and ship almost every conceivable foodstuff under the sun, for delivery across the globe. You want kumquat-flavored potato chips with your ostrich steak? It’s at Costco, made before you even realized you wanted it.

Which doesn’t mean there isn’t the occasional screw-up or prank. Here are five things that the truly unlucky have found in their food. 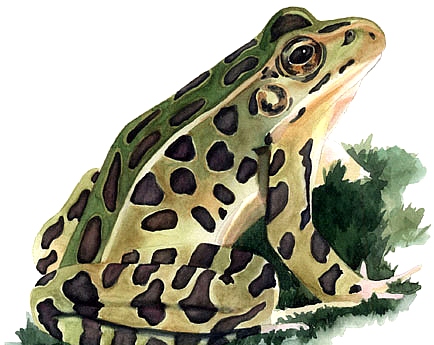 We like frogs. They hop. They ribbit. They help keep the ecosystem running by consuming lots of bugs. They sell us beer. And frogs, we’re guessing, like us… or at least want to be eaten by us, because they keep turning up in our food.

Seriously, there’s something about packaged food that frogs just love to turn up in it. First, there was a frog in a bag of greens from Wal-Mart. Then a frog turned up in a Smart Ones frozen meal.

Hell, even the frog’s buddy the toad got in on the act, pulling off a magic trick in the process. It magically appeared in a can of Pepsi, and not even Pepsi can figure out how it got there.

Frogs, seriously, it’s just creepy, OK? Stay in the swamps where you belong. We don’t want to eat you. Well… maybe some of the French. 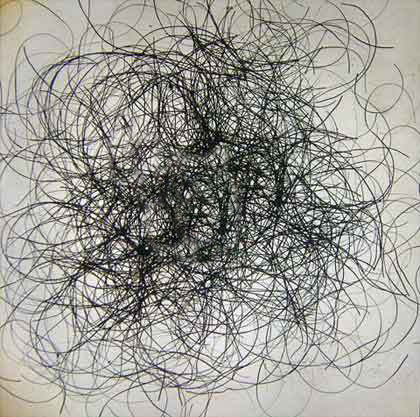 If you’ve got a delicate sensibility, you might want to stop reading. Everybody else, full steam ahead!

We’re guessing Ryan Kropp really hated his job. Either that or his culinary training had gone very, very wrong at some point. Regardless, he decided to flavor the steaks at his Texas Roadhouse with his own personal crotch seasoning.

Needless to say, this did not go well, to put it mildly. Kropp didn’t do this to just one customer, he actually did it to two, and neither of them was terribly happy about it. He also made the mistake of doing it right in front of employees and telling them “Yeah, I’m totally putting my hair all over this steak! I’m doing something that could get this restaurant shut down and you fired! Isn’t that awesome?”

Kropp was arrested and convicted of “placing a foreign object in food”, which carries a three and a half year sentence in Milwaukee. We’re assuming the jailhouse isn’t letting him help out in the kitchen. Too bad he couldn’t get a transfer to West Virginia, where they trumped his stupidity at a Wendy’s by serving a hamburger with what officers described as a “ball of pubes” (). Oh, yeah, real bright. Try and feed the guy with the mace, the handcuffs, and the gun your pubes. That’ll end well, champ. 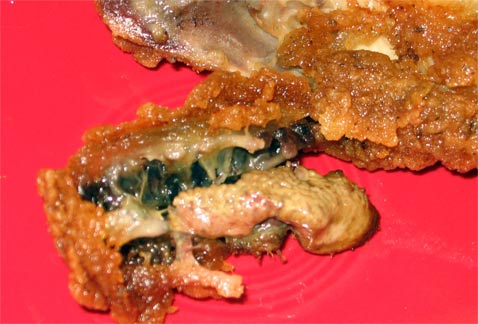 If there’s one thing you need to know about rural America, it’s that rural America loves to eat organs. Intestines, brains, livers, hearts, pancreas… they love it all. Sure, they’ll try and dress it up with names like “sweetbreads” or “chitlins”, but that’s just to trick you into eating it. It’s really the colon of a pig.

Of course, most fast food places realize that this is, in fact, pretty disgusting and we only do this because way back in the day, only guys with monocles and pimping mustaches got the steaks while everybody else had to scrounge. So organs aren’t generally on the menu, but sometimes they slip through.

Like, say, a small intestine that got deep-fried and served with some chicken at KFC. At first he thought it was brains, but then the good people of The Consumerist reassured him that instead it was the small intestine. You know, where the chicken keeps its poop. That’s so much better.