Everyone loves a good super-villain. There’s something about a madman in tights committing heinous acts of violence that everyone loves. Everyone also loves absurdly bad villains because you know the waddling man in the top hat isn’t going to beat Batman but dammit, he’s giving it his all. Isn’t that all that really matters?

After serving in and losing his brother to one of America’s undefined wars, Gordon Thomas returns home only to have his wife leave him with their son. Left with nothing, Thomas decides to become a new, less interesting man by becoming a sign smith, smithing signs for Ace Signs. Then Ace Signs is purchased by apparent sign enthusiast George Finch. Now without a sign to smith, Thomas makes the logical career choice of becoming a villain in New York City. Now known as Typeface, Thomas draws letters all over his body and attacks people with comically oversized letters for seemingly no reason; he attacks thugs on the basis that they’re thugish and goes out of his way to strike down Spider-Man because that’s apparently what you do when you’re angry in New York. 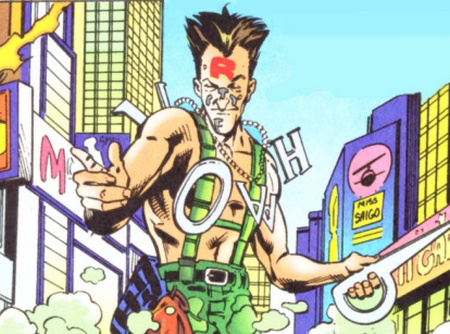 Actually, he looks pretty normal for a guy in New York City.

Though goofy to no end, Typeface has to be the most absurdly courageous comic book character in history. Without any natural ability to rely on, he simply fought people with giant letters. This was his method of attack in a city filled with mutants, aliens and monsters and is constantly ravaged by giant robots. That’s the sort of thing that would cause Batman to terror-shat his Bat-Pants.

In an effort to prove that comics hate veterans, Phillip Reardon was discharged from the army after a piece of grenade shrapnel struck him in between the eyes while serving in Vietnam. Upon returning home he becomes a warehouse guardsmen, presumably because all the sign smith jobs were taken. One night a group of thieves knocked him out before planting the bomb in his warehouse. After coming too, Reardon’s vision is blurred. He happens to see Batman and mistakes him for one of the thieves. Before he can bring the oddly muscular and caped street criminal to justice, the warehouse explodes, leaving Reardon blind in both eyes. Batman one, veterans zero. However, a doctor managed to salvage his sight, reconnecting his optic nerves through his fingertips. Blessed with literal second sight, Reardon decided to use his gift for the better bed, using his new 360 sight as Ten-Eyed Man, a villain who really, really wants to advertise the fact that he can’t see, for some reason.

On top of that, Ten-Eyed man holds the unique honor of being the only villain in the history of popular comics to be thwarted by holding any object at all. Seriously, anything in his hands and he can’t see. Sadly, he’s chosen to make an enemy of the world’s greatest detective, meaning he may very well never be able to successfully commit a crime or see through his hands ever again.

After failing as a game show host, Arthur Brown decides to don a costume and become a super villain. After all, if a blind vet can pull it off, why can’t he? Naturally untalented, Brown (now the Cluemaster) uses various flares, smoke pellets and grenades to protect himself. Before committing his misdeeds, however, he would always leave a clue. Why? Because game shows, that’s why. Unfortunately, Cluemaster made the poor career choice of making his stomping grounds Gotham city, home of the previously mentioned world’s greatest detective. Yeah, he’ll totally get away with it. 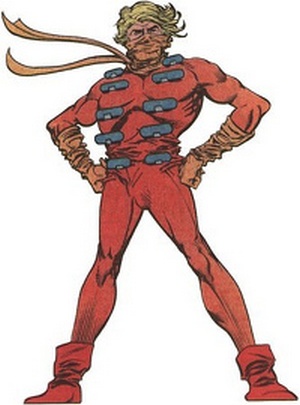 Not at all going to fail.

Perhaps the best part of Cluemaster’s character was his compulsion. Apparently clues were engrained in his very soul during his stint as a game show host, so much so that he couldn’t rob a bank unless some one had a chance of knowing about it before hand. However, where as fellow crook the Riddler at least attempted to make his clues challenging by forcing Batman to solve an assenting riddle, Cluemaster simply leaves clues completely void of whit, bells and whistles. Do people in Gotham not know that Batman’s there? Do they simply see the giant-ass bat symbol in the sky and think, “Oh, a bat. Nosferatu must be in town! I’ll have to drop in on him after I leave this note incriminating me of murder!”

To further kick his own ass, Cluemaster’s daughter eventually caught wind of her father’s criminal lifestyle. Once he came over his need to leave clues she put on a costume herself and became the Spoiler, leaving clues to her father’s crime in his stead. Treachery, much like game shows, must run in his genes.