If there’s a warrior more common in popular culture than the ninja, we’ve got a hard time thinking of them. Maybe the pirate, but you couldn’t pay us to open THAT can of worms.

Of course, we can blame some of this on the ’80s. Ninjas were pretty much a stock villain in the ’80s in movies, video games and trashy action novels that were nonetheless awesome. However these same materials were also in charge of making sure we got absolutely everything wrong about what ninjas actually were and what they could do. Not that ninjas are any cuddlier than their reputation suggests. Just the opposite, they’re scary as heck… an entirely different kind of scary that decades of ninja movies didn’t bother to mention.

So we’re taking it upon ourselves to set the record straight about everybody’s favorite dude in black trousers. Starting with the fact that he wore black trousers, which he didn’t. 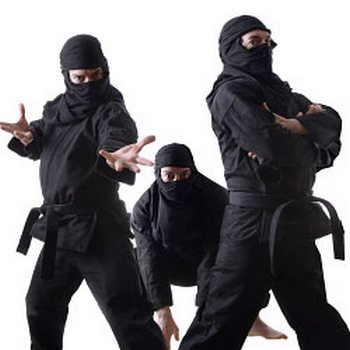 Nobody’s really sure how the idea of the ninja always running around black got started. Some argued it was Westerners misinterpreting bunraku; puppet plays with people dressed in black assisting the puppets. A ninja attack would generally be one of the stagehands, dressed in black, leaping forward and offing the target, and people just assumed ninjas wore black.

In fact, ninjas didn’t wear black unless the occasion absolutely called for it. More often, they ran around disguised. It was pretty easy to disguise yourself in feudal Japan; all you had to do was wear the right clothes and have the right haircut, and as far as most people were concerned, you WERE that guy. Adding to the fun was the caste system, which was so strict that if you were, say, a peasant, then somebody like, say, a samurai would barely notice you long enough to stab you if you weren’t getting in his way.

The ninjas used this to become “invisible”; i.e. the people they were hunting couldn’t see them because they were bigots. Remember, this is before photography, as well, so basically a ninja could, for all intents and purposes, “disappear”. 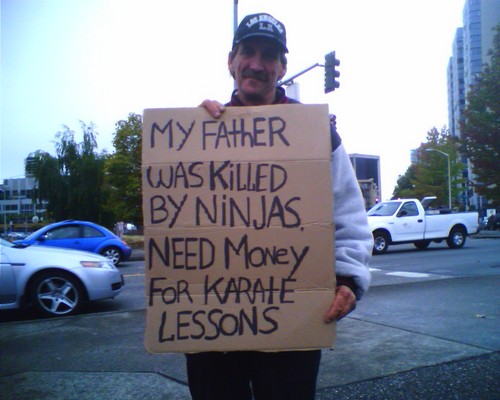 Well, they were occasionally. But that wasn’t their main job. Ninjas were essentially the all-purpose dirty tricks guys of feudal Japan. If you needed a guy offed, find a ninja. But if you needed your rival’s sake brewery sabotaged or his house burned to the ground or to figure out what was going on in your enemy’s household, or to incite his vassals into having a good, old fashioned ikki (Japanese for peasant riot)? You also got a ninja. In fact, the best word to describe the ninja is less “assassin” and more along the lines of “spy” or “terrorist”. He was the one you got to scare the crap out of the guy you hated.

In fact, it’s pretty hard to prove ninjas ever assassinated anybody because they’re just so slippery. Most of the records we have of ninja assassinations are actually ninja who messed up and either got caught and killed, or ran away. The most records of dastardly deeds on the part of ninjas that we have are actually arsons they committed. Since their entire style of architecture centered around wood and paper, the Japanese were deathly afraid of fire. This pretty much cemented the ninja’s reputation as a scary guy to tangle with.

Ninjas Only Snuck Around at Night 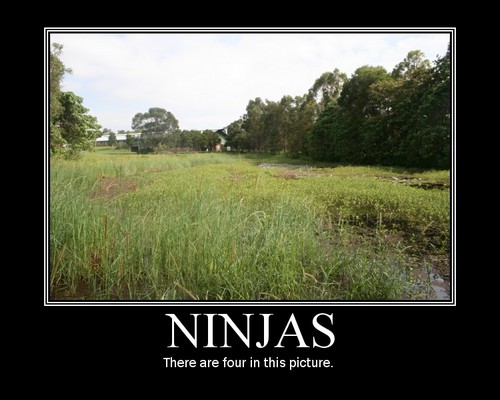 Ninjas didn’t actually do this all that much, or at least not the way people are thinking. Ninjas actually had as much to do during the day as the rest of us, so they spent a lot of their time outside, in the sunshine, standing right next to you with a spike ready to stab into your kidney if you annoyed them.

Of course, ninjas tended to pretend they only struck at night because that would lull their targets into a false sense of security. Then, you take a walk at high noon and hello, there’s a spear sticking out of your stomach! Hope you’ve got a good health plan, sucker!