Don’t get us wrong attorneys, we’re not saying that George Lucas hates all minorities. After all, his first bunch of Star Wars movies handled the subject pretty well with a notable exception or two.

But somewhere between the first and second Star Wars trilogies, Lucas’ imagination seems to have deteriorated to the point where he started basing all of his alien races on stereotypes.

Watto runs a pawn store in Mos Espa where he owns Anakin Skywalker and his mother. He’s is a greedy merchant, so obsessed with money and property that he even buys and sells humans as slaves.

George Lucas obviously thought long and hard about what characteristics to give his ultra-capitalistic greed alien, and then decided that the most important feature was a long, hooked nose.

As if the nose and the noticeable Middle Eastern accent didn’t beat the audience over the head enough, in the second movie, Watto has gained both a beard and a spiffy hat that somehow looks familiar.

Well, that’s really not so ba…

That’s right, Watto is Jewish. And apparently, he’s also embraced Hasidism by the time of Attack of the Clones. Perhaps that’s why Jedi mind tricks, associated with Christianity in The Phantom Menace via Anakin’s virgin birth story, don’t work on him? He obviously doesn’t accept the Midichlorians as his personal lord and savior. 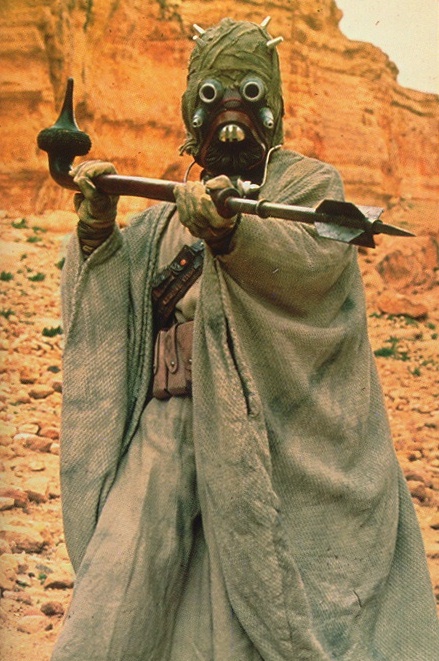 Sandpeople, or Tusken Raiders, are Tatooine-based vicious brutes who live out in the desert. They wear long pale robes and keep their faces covered. And they’re apparently so incompetent and backward that Ben Kenobi calls their blasting skills less accurate than those of the Imperial Stormtroopers.

And then there’s the fact that they are called sand people, for god’s sake. It’s no huge leap to figure out which ethnic group Lucas is trying to smear with this particular race of aliens. 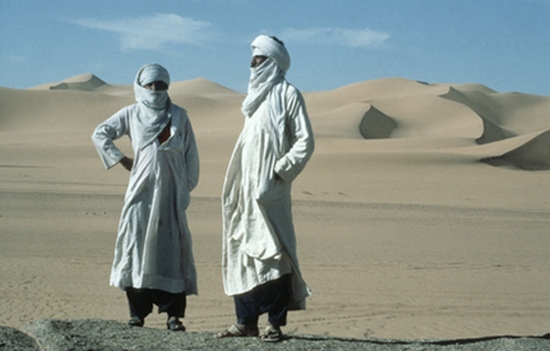 They have much nicer robes though.

That’s right, the Arabs are next on the long list of groups that Star Wars apparently has a problem with. And when it comes to the new trilogy’s depiction of Sandpeople, it’s no longer enough just to embrace racial stereotypes. Lucas must also make his main characters act towards them with chilling bigotry.

After Anakin attacks a village of Sandpeople, ruthlessly slaughtering their women and children, he confesses the act to Padme, one of the enduringly ‘good’ characters who we’re presumably meant to find heroic. “They’re like animals, and I slaughtered them like animals,” he says. “I hate them!”

In other words, a man has just told her that he has slaughtered a bunch of innocents of a different race, and she’s asking him what the problem is.

3Nute Gunray and the Neimoidians

Neimoidians are the race who ran the Trade Federation, several members of whom conspired with Emperor Palpatine and several other evil dudes to undermine the Republic. They tend to talk in a funny accent, mixing up their ‘l’ and ‘r’ sounds. Their colony planets had Japanese-sounding names like Cato, Deko and Koru.

They also wear funny hats and gowns that make them look like a cross between Chinese emperors and felt elephants. Also, a chin butt that would make Ben Affleck blush.

We’re a bit confused about these aliens, though. Sure, they’re evil, cowardly and scheming like all the non-white races in Star Wars are, but Lucas didn’t really go for any of the ripe ethnic stereotypes that he could have.

2Shmi Skywalker And The Females

Okay, women aren’t technically a race, but the status of female characters in the Star Wars movies deteriorated so rapidly that we can’t leave them out. In the original trilogy, we were at least given Princess Leia, a woman who was not only smokin’ hot but was actually intelligent and somewhat competent.

She could handle a blaster, threaten people with a thermal detonator, and wasn’t afraid to strangle you with a chain if you sexually harassed her enough. She had goals, dreams, attitude, ambitions and above all, a personality.

In the new trilogy, on the other hand, we are given female characters like Shmi Skywalker, Anakin’s mother, who has no other character or purpose in life other than to advance the male lead’s plot points.

So bland they didn’t even both giving her enough vowels.

Shmi gets some lines in Episode one, where she looks sad and tragic a lot and talks about her important son. She’s apparently not important enough for a Jedi to release from slavery, though. I mean, come on. Surely Obi Wan could have pawned off a Jedi statue in Coruscant or something and transferred some money over to free her later.

Or Anakin could have brought up maybe rescuing his mother from slavery in all their years of training. But apparently it didn’t come up, because really the only important thing someone with lady bits can do in the new trilogy is died. And that’s only important because it’s an excuse for the male characters to get angry and dubiously become evil.

This is possibly the first site on the internet to complain about this. By Episode Three she’s reduced to Shmi Skywalker levels, doing little else but moping around crying, having babies, and dying tragically.

Finally! An excuse to be evil!

1Jar Jar Binks And The Gungangs

The planet Naboo is inhabited by two races: the cultured humans who build beautiful palaces and hold a cultured royal court and the Gungans who live underground and don’t understand technology. The main Gungan in Star Wars is Jar Jar Binks, a dimwitted but ‘loveable’ klutz who ends up helping out our beloved heroes. In the world of George Lucas, Gungans are also known as black people.

But Jar Jar’s skin is orange, you say. And black people don’t have long ears! Well, here’s a picture of the guy who played Jar Jar, and provided him with both his voice and gait:

It’s okay to be jealous of his hat. Is there something George Lucas is trying to tell us?

Jar Jar speaks in a barely understandable simplified language. At first, the audience assumes that English is not his first language and that a kind of lingua franca has developed between the English-speaking human inhabitants of Naboo and the Gungans to allow them to communicate.

However, when we see Jar Jar’s home, we discover that he communicates to the King in this language and that it’s all they’ve got. Since it seems to be based on English, one assumes that before they met the pale, cultured people of Naboo, they simply communicated by flinging mud at each other.

The Gungans don’t have much to offer in way of culture, either. Political debates are settled by simply arguing really loudly and occasionally blowing raspberries. Wars are fought by slingshot, since the Naboo human weaponry apparently is too complicated. When Jar Jar actually gets his hands on a gun, tragedy is avoided only by the fact that the movie is clearly aimed at children.

It’s not that Gungans are bad people (or whatever), per se. They’re just simple, childlike loveable folk who are in firm need guidance by the upper races. One might say that they are the Nabooan’s burden.