Advergames are video games that exist strictly to advertise a brand or product. The ideas of fun or even challenge are an afterthought since all the money is coming from and dedicated to whatever is being advertised. Few advergames are successful, but these are five of the worst offenders.

Dominos wasn’t the first fast-food brand to advertise itself through video games, but it does seem a little senseless to do so. Judging by what we’ve seen of YouTube video game reviewers, gamers are very familiar with pizza and most likely have been for some time. Trying to introduce them to Domino’s pizza is like introducing a shoe to a foot.

What’s really bewildering is the choice of using the Noid in a form of entertainment meant to be enjoyed by anyone other than Satan. The Noid is fondly remembered as one of the worst characters in the history of advertising. Expecting players to warm up to something they’ve been trained to dislike is an uphill battle to say the least.

Who wouldn’t love this face?

But Yo! Noid doesn’t really try to sell pizza. Much of the focus is on the Noid trying to survive the mean streets of New York while everything with a heartbeat attempts to end his life. That’s pretty par the course, but when pizza actually shows up its both brief and insulting, breaking down into basic mathematics (see: picking big numbers) to win a pizza eating contest. We weren’t always expecting gold from the NES, but come on.

As a consumer base we really let Atari get away with murder. It wasn’t until 1983 that we realized the company wasn’t even trying anymore that the industry crashed, taking years to recover.

A large reason for the crash was the market being flooded by rushed and sub-par software. E.T. is the famous example but the Atari 2600’s back catalogue is filled with games that meet the “finished the night before it was due” level of quality that eventually drove us away. Chase the Chuck Wagon falls into this category, though not intentionally so. When Prima asked Spectravision to make a compelling video game based on dogs and dog food they didn’t add the stipulation “make it as terrible as possible.” That came naturally because it was a video game about dog food. Seriously, corporations were so quick to cash in on the video game craze that they didn’t stop and think about just how incredibly out of touch with it they were. No one put together a focus group to see if anyone would give a rat’s ass about a dog food game. If they did, they would have been slapped by everyone involved.

You probably aren’t surprised to learn that not many people sent away for a copy of Chase the Chuck Wagon. It’s believed that the unsold copies were destroyed. Meanwhile, collectors have latched onto the game as one of the 2600’s Holy Grails, proving once and for all the collectors are people who are just terrible with money.

Chase the Chuck Wagon was a solid example of a corporation not knowing the audience they were trying to reach. It’s safe to assume that some gamers have dogs, but is their canine fanaticism enough to get them suckling at your digital teat? Since the game could only be purchased with a set of proof-of-purchases from the brand of dog food advertised, doesn’t it seem odd to reward that customer loyalty with further advertising? Wouldn’t this game be better geared towards dogs, and do dogs even play Atari? These are all questions someone should have asked.

Hooters Road Trip didn’t have this problem. Video games and almost pornography naturally overlap because the audience is made up predominantly by people with penises. Even when games don’t feature any overt sexual content players would inject their own (remember Mortal Kombat’s Nudality rumors?).

Knowing what we know about the male sex drive, logic should have betrayed us and sold millions upon millions of copies of Road Trip based on potential cleavage factor alone. But two factors sabotaged this effort. First, the game is universally terrible. Monkey pox has higher ratings and caused less disappointment. Even when your primary objective is to hope to uncover something you can masturbate to, it’s really hard to overlook how awful a game is when playing video games is how you spend your free time. Second, you can’t reasonably challenge someone and reward them with something sexy. The Internet does the same thing but replaces “challenge” with “ten seconds on Google” and drops the price by about forty dollars. Nice try, Hooters.

The California Raisins are one of those freak successes in advertising that no one can really explain. Their intended purpose was to advertise actual, non-musically inclined California raisins, and while they were able to generate two-million dollars in media deals and merchandising, they didn’t really spike the sale of raisins that much. They were successful only in promoting themselves, which meant the inevitable crash was going to hurt that much more. 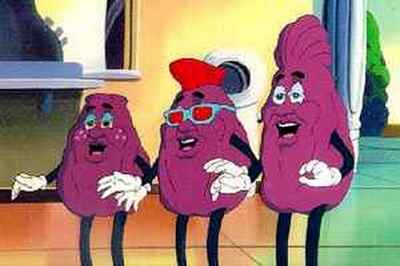 The Raisins had a success streak of about four years. In that time period they dominated as many mediums as possible including popular music, recording four albums in the span of two years. That’s a tremendous output for fruit. That’s also why they burned out as fast as they did: we were simply sick of them.

Capcom’s California Raisins: the Grape Escape had the misfortune of bad timing, which is why you’ve never seen the cart sitting in Blockbuster bargain bin. It was never commercially released, and although a specific reason why was never given, it’s generally assumed that it simply came too late in the Raisin’s life cycle.

In the late 80s and early 90s, McDonald’s was featured in a series of video games aimed at young children. Burger King, always two steps behind, got around to the advergaming thing in 2006. One of three Xbox 360 games was offered for around four dollars with a meal purchase, which should speak to the quality of the games themselves.

Anyone ponying up the cash for PocketBike Racer, Sneak King or Big Bumpin’ had to know beforehand that they weren’t getting anything great. Not surprisingly, the games themselves were watered-down clones of other popular titles. Despite this they’ve sold at least a million copies. Somehow, Burger King managed to crack the code for moving shovelware: offer it with a fatty sandwich and charge next to nothing for it.