The games we play today have a basis in the games of the past. What follows are five ancient sports that somehow play into modern games.

Duck on a Rock

Originating in the Middle Ages, duck on a rock was a game played by children comparable to tag, if tag included the accidental stoning from time to time.

The game begins when a large stone, known as the “duck” due to the poor quality of medieval public education, is placed on a large stone or tree stump. One child is the guard while the others attempt to knock the duck off of its base by hurling stones at as hard as they can. The only safety measure in place is a line that the stone throwers can’t cross before casting their stones. Otherwise, it’s time to man up. 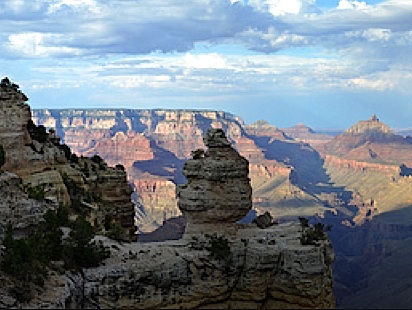 The key is to use bigger rocks.

The guard has no means to stop the onslaught. Once the duck has been dethroned, however, he may place it back on the stump and pick up a stone. If he does this, he’s able to tag another player but only while they are attempting to retrieve their stones, which most players would do en masse to increase their own odds of not getting tagged. Then whoever was tagged becomes the new guard and it starts all over again.

A recent discovery claims links to duck on a rock and the creation of basketball, which leaves us to wonder just what the hell kind of basketball are people playing? And how do we get invited to that game?

Ulama has its origins in an early Aztec game, making it one of the oldest games to be played with a rubber ball.

Although technical details vary from region to region, a typical ulama court is divided into two halves with boundaries drawn on the outside. Teams can contain anywhere from two to five people and the game is played by players keeping the ball out of their side of the court but in bounds. Points are scored when the ball reaches the other player’s zone and points can be lost if the ball doesn’t travel far enough or leaves bounds.

Traditionally ulama is played with the hips. Players may use pads to guard their hips while bashing the ball around. Other variations will use other body parts, but none allow for the use of hands because that’s too easy. The more extreme games will make use of heavy two-handed paddles to hit the ball back and forth. 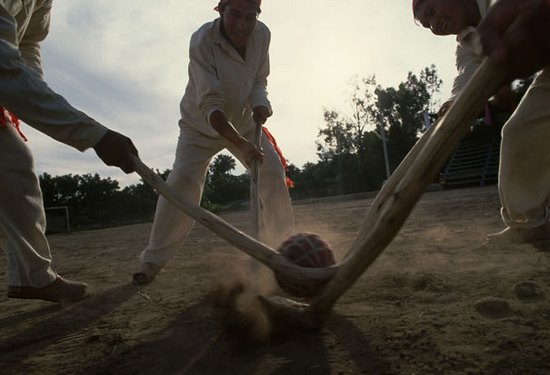 The game is believed to have been played in most (if not all) parts of ancient Mexico as well as southern areas of North America. Rubber balls have been found dating to 1400 BC and nearly one-thousand five-hundred ball courts have been found.

Despite the whimsical name, chunkey was serious business for Native Americans. A popular spectator sport in its time, players and audience members were known to gamble on the outcome, some going so far as to wager everything they had. Some losers would even commit suicide. It was just a tad important.

Players would begin by rolling a clay disc out into an open field or before running and throwing their spear right after it, aiming to have the disc stop somewhere in the area of (or on top of) the spear. It’s not as easy as it sounds due to the small size of the disc, around three inches in diameter. 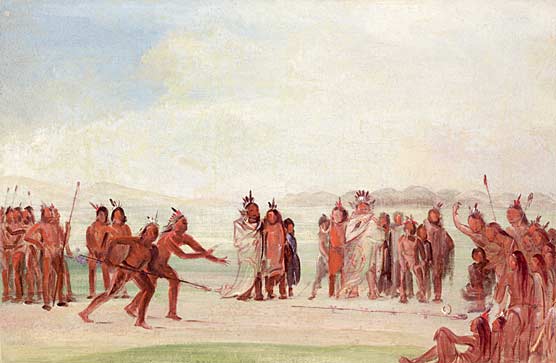 Also, you looked silly doing it.

Chunkey was played from 600 AD up until at least the late 1800s, well after contact had been made with Europeans. Throughout its history it was played on clay fields used strictly for the game and in large arenas in front of massive audiences. The game was most popular in the southeastern United States.

The Australian Sports Commission has recognized woggabaliri as one of the oldest indigenous sports and is the oldest one depicted in art. The object of the game is to keep the ball in the air between all the players without touching it with one’s hands or arms. 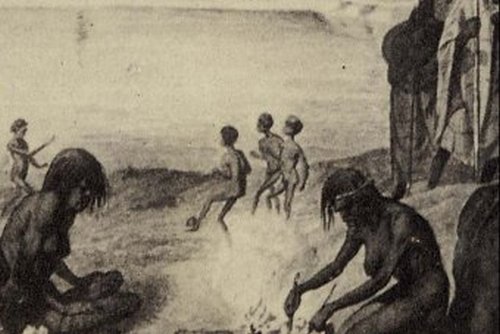 Players use their legs and feet to keep the ball moving in a circle that’s two meters wide and are only allowed to touch it once before another player must touch it. Each successive hit is counted. Should the ball drop or a foul committed players start at zero and work their way up again.

The competitive version of the game is a bit different. Two teams of four players face each other on opposite sides of a court with goals set up behind them. Players are permitted to use their heads or chests to strike the ball but the same rules about successive hits still apply. Players try to strike the ball into the opposing goal while keeping the ball off the ground. If they fail a shot possession goes to the other team and play continues. Games generally take twenty minutes and are divided into two ten minute periods.

The game has been preserved to this day and is thought to be the origin of “keepie-uppie,” or juggling a soccer ball without one’s hands.

Cuju is ancient football (soccer football – sorry, NFL enthusiasts) as practiced in ye olde China. Though it would eventually catch on in surrounding countries like Japan and Korea, cuju was incredibly popular in China and was played by aristocrats, military men and children alike, sometimes all together – records show a teenaged girl beating a team of soldiers. 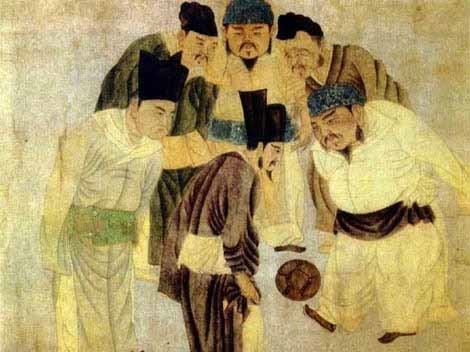 Are you ready for some football?

The most enduring variation, called “Bai Da,” was played by teams on an enclosed field. The game no longer focused on scoring goals. Instead it was concerned with skill; rather than scoring points, players were penalized for fouls, and the team with the least number of fouls would win. If a player kicked the ball out of bounds, failed to reach another player with a kick, touched the ball with their hands or performed any small technical error would receive a deduction. Previous versions of the game closer resembled football, with two teams of twelve to sixteen members on each side attempting to score goals. This version of the game was played by all classes of society during the Han Dynasty; previously it had been restricted largely to aristocrats.