Greetings horror freaks, its time to continue our series with the Halloween horror icon, Michael Myers. In our previous articles we discussed Chucky and Freddy Krueger, two extremely vocal and charismatic killers. In contrast, Michael Myers has always been the strong, silent, homicidal type. Truthfully, we here at Weird Worm prefer our maniacs that way. 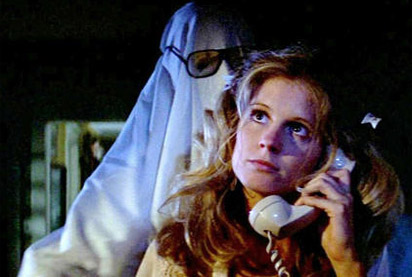 Anyway, let’s see if we can have some blood-soaked fun delving into the thirty-two year development of this horror legend.

The Birth of a Shatner-Faced Horror Icon

Before we get into the evolution of this movie monster let’s start at the beginning. The original Halloween was directed, produced and scored by John Carpenter. Yup, back then Carpenter did it all. Our guess is he probably catered the film too by making sandwiches for the crew everyday. The flick starred veteran actor Donald Pleasence as Dr. Loomis and Jamie Lee Curtis in her “scream queen” film debut as Laurie Strode.

Here she appears during one of the rare moments in the film where she wasn’t screaming hysterically.

The first actor to play Michael Myers or “The Shape” was Nick Castle, who can be seen here ruining movie magic and enjoying a Dr. Pepper.

After Halloween, Castle became a director and gave us films such as Dennis the Menace and Major Payne, which terrified audiences considerably more than Michael Myers.

The first Halloween movie, and eventually most of the series, was set in the fictional Midwestern town of Haddonfield, Illinois. The back-story for Michael’s character was simple yet disturbing. Early in the first film, we witness Michael Myers (as a child) brutally murder his older sister by stabbing her with a kitchen knife. Why? We never really know for sure and the film is all the more frightening due to that uncanny mystery. Naturally they completely ruined the ambiguity in the sequels… but we’ll get to that later.

On a cool side note, this pint-sized maniac is now a collectable action figure!

Several years later, Michael escapes from the mental hospital, stalks his (other) teenage sister and kills countless people as required by the laws of slasher movies. The character of Myers (specifically in the first two movies) embodied the notion of an unstoppable evil. In fact, he was probably best described by Dr. Loomis as “the boogeyman”. One of the key ingredients to the success of the first two films was the intense level of suspense. Myers lurking behind some bushes or in the shadows created an eerie sense of impending doom. To add to the creep-factor, Michael was also mute and you barely saw his face.

According to the film’s original writers, John Carpenter and Debra Hill, the inspiration behind Michaels’ character came from Celtic traditions of Halloween such as the festival of Samhain. Hill has stated that; “We went back to the old idea of Samhain, that Halloween was the night where all the souls are let out to wreak havoc on the living, and then came up with the story about the most evil kid who ever lived. And when John came up with this fable of a town with a dark secret of someone who once lived there, and now that evil has come back, that’s what made Halloween work.”

Not only did evil come back…it also hid in the darkness and stabbed you in the face.

After two awesome horror flicks, (Halloween II, being the bloodier of the pair), Michael Myers was finally killed off, never to be seen again.

We’re shocked we were even able to type that last sentence with a straight face.

Can anyone possibly survive this? Depends on ticket sales!

Despite years of sequels, Myer’s story was essentially complete after the first two Halloween films. As many hardcore fans are aware, Carpenter had no intention of Michael ever becoming a reoccurring villain throughout the series. Moving ahead, Carpenter’s plan was to turn the franchise into a Halloween themed anthology of singular horror stories. Each new film was meant to be helmed by a different director. The studio attempted just that in 1982 with Halloween III: Season of the Witch.

Maybe the less said about this movie, the better.

The problem with the third installment wasn’t so much that it was a weird and awful film. Perhaps if the movie was a stand-alone piece, untied to the Halloween namesake, it would have faired better. However, the film was such a radical (Michael Myers-less) departure that it baffled the hell out of pre-internet movie audiences. Thanks to Season of the Witch, Hollywood learned a valuable lesson. NEVER try anything new ever again.

The Franchise Resumes With Myers 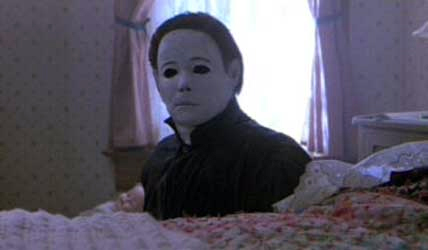 Due to the piss-poor reaction of the third movie, studio writers hastily reintroduced Michael Myers and hoped that we’d all forgotten about whatever the f*** this was…

With John Carpenter absent from the series and Jamie Lee-Curtis moving on, the only returning player to the franchise was Donald Pleasence. Despite the welcome return of the heroic doctor, continuity really started to go to hell in the fourth and fifth installments. For example, how Dr. Loomis survived a hellish explosion at the end of Halloween II with simple scarring is baffling. 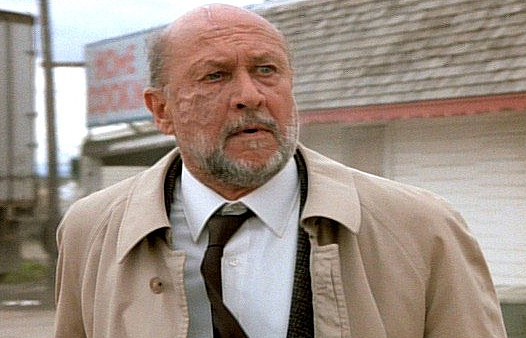 Meanwhile in Alien 3, Newt and Hicks couldn’t even survive a short while in space while protected in cryonic stasis.

So how different was Michael Myers in the fourth and fifth installments of the franchise? Basically he was the same character almost to a fault. In fact, both films were criticized by fans for not bringing much originality or progression to the series. Much of that had to do with Michael still being the same non-stop evil he always was. Unfortunately, by the late 80’s, the concept of an indestructible killer was growing into a cliché thanks to Freddy and Jason hacking apart teens in sequel after sequel. 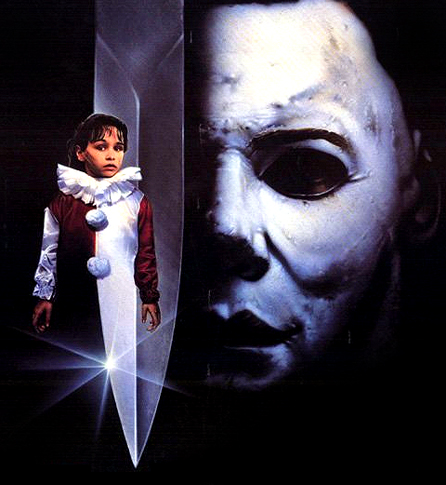 On the plus side, we did get some cool posters.

Thankfully, in Michael’s case, the dynamic changed somewhat when they introduced Jamie Lloyd, Michael’s young niece and new stalking victim. In the fourth film it was hinted that Jamie had become possessed by Michael’s dark spirit, potentially taking the series in a new direction with a killer clown girl. But by the time the next installment came around the producers decided to play it safe and stick with Michael as the main threat. In their defense, the last time something “new” was attempted with the franchise the result was, Season of the Witch.

The Shocking Twist Nobody Really Wanted

THE FILM: Halloween: The Curse of Michael Myers, 1995

One could claim the writers did what they could to keep Michael interesting. However, some fans felt they pushed the envelope a bit far in Curse of Michael Myers. Most fans think they snapped the envelope clean off and sent the series into a tailspin. How far did they go you ask? As the movie unfolds we learned that the character of Jamie (who was previously kidnapped) was actually impregnated by the “Cult of Thorn”, a satanic sect led by Dr. Terence Wynn, Dr. Loomis’ colleague (a.k.a. the man in black). 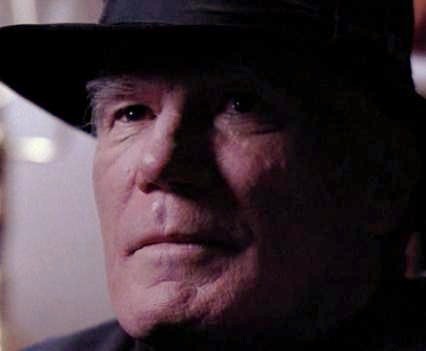 If you can’t trust creepy old “man in black” who can you trust?

Later, the mysterious character of Wynn was revealed to have been manipulating Michael Myers evil deeds all along, sort of like Chancellor Palpatine. Apparently the “Curse of Thorn” was the cause of Myer’s murderous obsession with his family. The curse was also implied as an explanation behind Michael’s inhuman strength and near invulnerability. In essence the curse was the answer to all the stuff you may have wondered about for two seconds… but probably never cared for it to be actually explained. Like algebra. 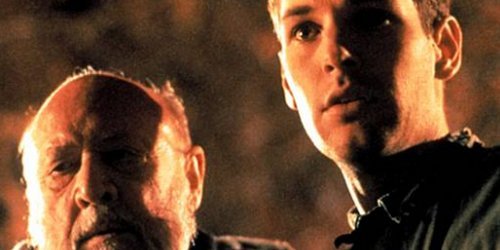 Even the sarcastic powers of a young Paul Rudd couldn’t save the film. 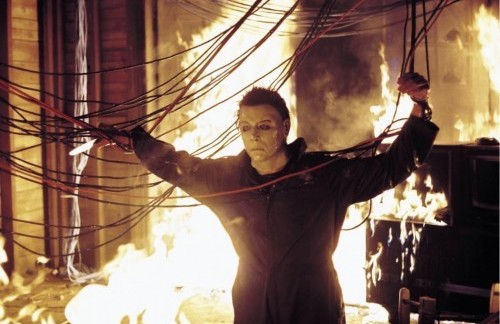 It’s no wonder the following two films ignored everything from the previous movies. Sadly, by then, even the return of Jamie Lee Curtis couldn’t save the series. For starters, the previously mentioned continuity issues which crept up in the previous movies were taken to a whole new levels of confusing. For example, H20 indicated that Michael Myers had not been seen since the fatal night depicted in the first two movies. Also, everything about Jamie’s existence, including her infant was forgotten about. So we’re talking Star Trek-ish, alternate time-line stuff here. By default the moronic reality-tv infested sequel which featured Busta Rhymes was also part of the new alternate Halloween time-line. That film was also the nail in the coffin for the original series. 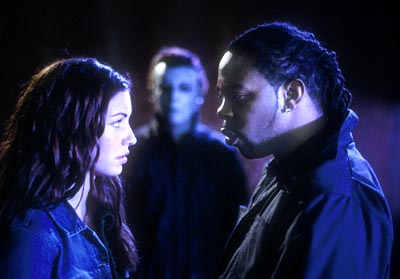 Whoo-Hah! M. Myers got ya all in check!

By the time the series was nearing its inevitable end, Michael’s character had grown into a dull, predictable, over-powered monster. His supernatural abilities approached Incredible Hulk levels of ridiculousness. It became increasingly comical how unstoppable he was and how easily he disposed of victims.

Little did we know things were somehow about to get worse… 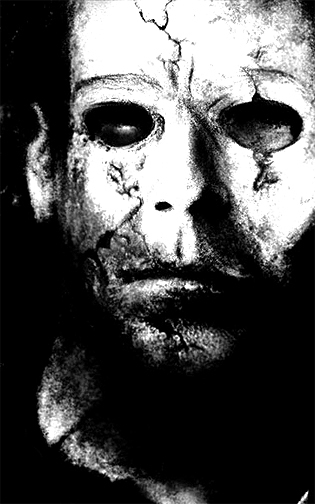 You have no idea how much we even hate the idea of discussing these two films. We’ll preface this section by at least stating that we understand the vibe Rob Zombie was going for and appreciate the effort he made to take the rebooted series into a different direction. However, the movies simply failed on too many levels. The plots were jumbled and dreary. The acting was inconsistent with performances ranging from decent to over the top. The hallucinations and imagery of Michael’s mom and an ethereal white horse were insane. And to make matters worse, Dr. Loomis was all kinds of wrong, particularly in the second film where his egocentricity made him completely unlikable. It’s hard to root for a complete d**k in any situation. 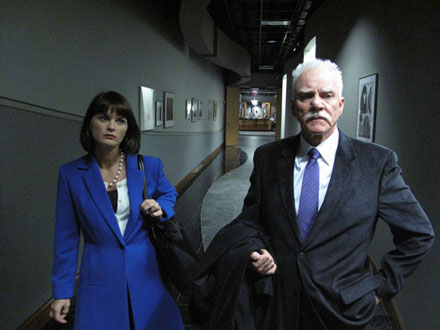 Yeah, feel free to kill off that guy. He looks like a douche.

Back to our main point, the evolution of Michael Myers character. If there’s one thing that Rob’s movies accomplished (aside from pissing us off) it was expanding upon the lead character. For starters Michael’s entire back-story and childhood was no longer presented as a brief flashback but as a fully fleshed out subplot which took up way too much screen-time. You’d think seeing young Michael get crapped on and abused would enable viewers to sympathize with the humanized character. Nope, not really… and we’re not even sure we were really meant to. In which case, why put us through the drawn out back-story which led directly to a predictable retelling of the events in the original? 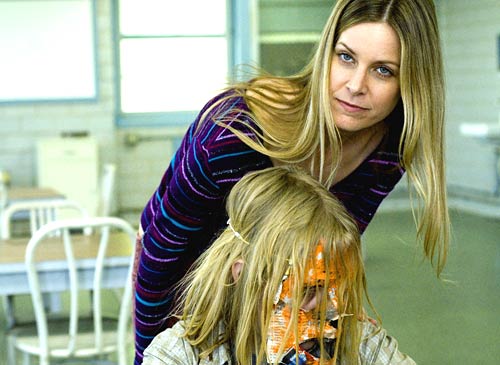 Wait, is that a tiger mask or…um… What the f**k are we watching?

Zombie’s version of Michael was completely different than Carpenter’s in many ways. Physically speaking, the adult Michael was an ultra-violent behemoth played by Tyler Mane, the dude who played Sabertooth in X-Men. In the first movie Michael at least maintained his classic look (mask and outfit), though significantly darker and grittier. In the sequel though Rob went off the deep end with Michael’s appearance. Zombie’s second take on Myers was essentially a crazy, MASKLESS, bearded hobo, far removed from any traces of the classic character. While a new interpretation is one thing, a completely different looking character may as well be a completely different f***ing character. 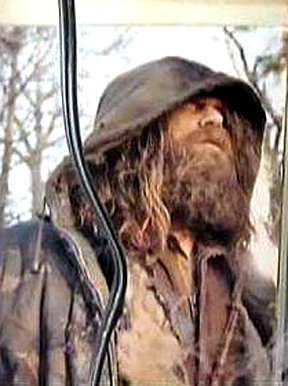 Yup, if there’s one thing this filthy bearded giant reminds us of… it’s Michael Myers.

For now that’s the end of the Michael Myers story. Here’s hoping one of these days we can actually end one of these Horror Legends entries on a positive note.

5 Tips for Choosing a New Sofa

Survival Fishing: 7 Tips for Catching Fish in an Extreme Situation

5 Scandals that Shook the Gambling Industry

5 Tips to Transform Your Lounge with a Home Video Wall 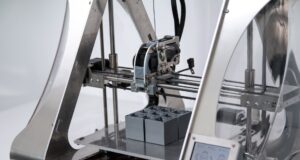 The Ultimate Guide to CNC Programming in 4 Steps

Survival Fishing: 7 Tips for Catching Fish in an Extreme Situation

5 Scandals that Shook the Gambling Industry