In our previous article we discussed everyone’s favorite burn victim, Freddy Krueger. For this entry in our series we’ll be talking about a significantly shorter horror legend; Chucky, the killer doll from the Child’s Play movies. If Chucky taught us anything, it’s that size doesn’t mean jack when it comes to murdering the crap out of people. As long as Chucky had a few boxes or a counter top to stand on he’d gut you just as well as the next lunatic. So let’s get to it and see how this little, red-headed monstrosity evolved throughout the years.

A Plastic Icon is Born 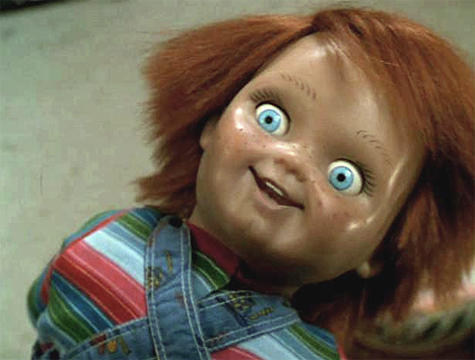 Chucky had the disturbing Linda Blair head twist down to perfection.

The Chucky character has a storied origin which involves voodoo, retribution, possession and lots of child endangerment. The tale of this evil doll began with a serial killer named Charles Lee Ray, a.k.a. “The Lakeshore Strangler”. After getting shot and mortally wounded, Charles used a spiritual ritual to transfer his soul into a “Good Guy” doll. As everyone knows, there’s nothing more terrifying than a child’s doll, especially when it’s wearing overalls and is modeled after the Cabbage Patch Kids. 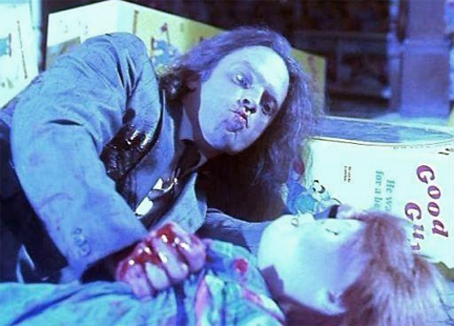 If a Transformer toy had been lying around then the films could have gone into explosive Michael Bay territory.

Chucky was played by Brad Dourif, who is the go-to guy when it comes to psychopaths. Dourif went on to voice Chucky throughout the five film franchise. In the first two movies the Chucky character was consistently dark and violent. He spent most of his time slicing up victims and chasing after a young boy named Andy. Chucky wanted to transfer his soul into Andy’s body so that he could once again become human. 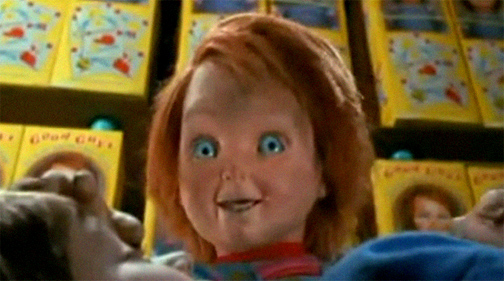 This ritual scene would be repeated an insane amount of times throughout the series.

In the original film Chucky appeared in his slightly less creepy “good-guy” state for a large part of the action. Many of his movements, once he sprung to life, were only visible in fleeting glimpses. In fact, if you go back and watch the first movie you’ll notice there’s some ambiguity regarding Chucky as it was implied that he may not have even been the real killer. Instead we were left to wonder if perhaps it was the little boy Andy commiting the crimes either because he was possessed or was acting out. Thankfully that was not the case because we’ve seen so many movies make use of the cheap psychological/split personality shtick. By the time the sequel came around we got to see Chucky in action a whole lot more and it was made crystal clear that he was the true star of the show. 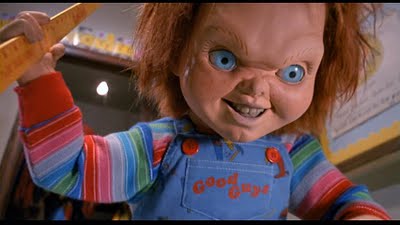 And by “star” we mean “freak on wheels”.

The Child’s Play movies made use of old-school special effects which helped give Chucky a unique and frightening quality. According to Child’s Play effects wiz Kevin Yagher, the cost of creating the Chucky character for the first two movies was over one million dollars. There were three main Chucky dolls, two cable-controlled and one radio-controlled. There were also several radio-controlled heads, specialized stunt dolls and seven to nine puppeteers working simultaneously. 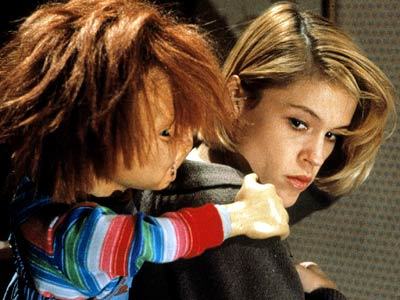 It’s our guess that she’s basically riding the puppeteers in this scene. 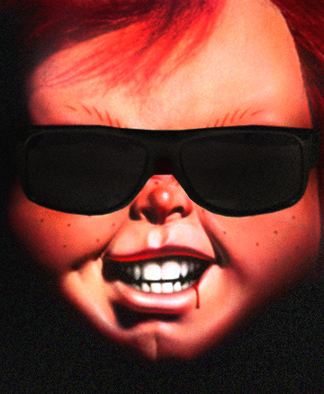 By the time the third flick hit theaters, Chucky was a household name. This is the point in the series where viewers began cheering for Chucky as he stalked and killed his victims. It’s also the point where the series predictably took a turn and became cliché and repetitive. Despite the success of the first two films Chucky’s character began getting dumbed down in a lame attempt to appeal to the masses and shill some merchandise. 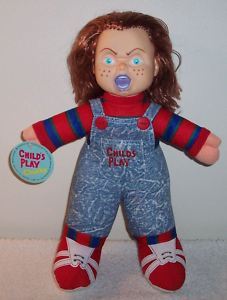 When you started seeing these in car windows you knew it was over.

Child’s Play 3 was the last we’d see of the darker Chucky we came to know in the first two movies. The end was near for the icon, we just didn’t know it yet. The creator of the films, Don Mancini, however did know since he’s stated on record that Childs Play 3 was his least favorite in the series and he basically ran out of ideas after the second film. We bet he still had fun cashing all those checks though! 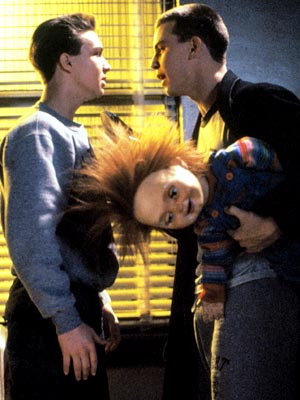 The one good thing about Child’s Play 3? Chucky’s hair. His ridiculously awesome hair. 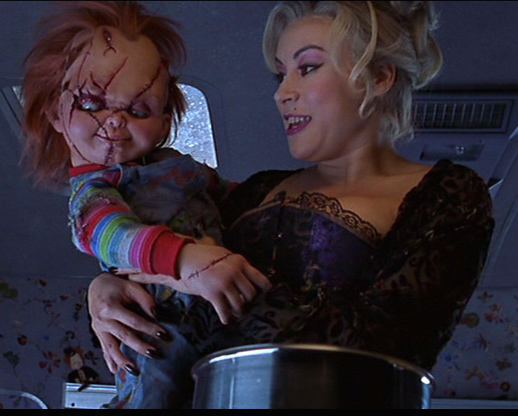 The next two sequels, Bride of Chucky and Seed of Chucky pushed the character into a goofier and more self-referential territory. Although the sequels roughly followed previous continuity, they were basically a whole new / weird animal. Chucky’s look also changed drastically. He went from having a clean doll-face to having a permanently evil visage covered in cartoonish scars. 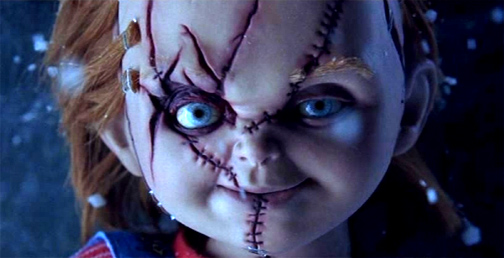 Basically he looked like something inspired by a Todd McFarlane toy.

By the time the final sequel hit theaters the series had fully evolved from straight horror into a comedy / horror / parody. Along the way Chucky united with Tiffany, a female counterpart voiced by Jennifer Tilly. If that wasn’t bad enough audiences were eventually blessed with their hell spawn, Glen/Glenda as voiced by Billy Boyd. Seriously, we know these movies kept making money… but we have no clue why. 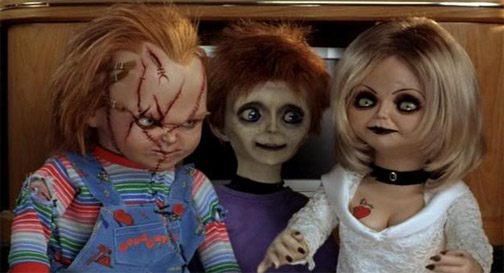 Sadly this isn’t much worse than most family portraits.

With the drastic change in direction of the series, Chucky noticeably changed along with it. After all, there’s no way the creepy horror icon that spooked audiences in the first Child’s Play could have convincingly fit into the last two films. There was just no place for him. Especially considering so much attention was required for Jennifer Tilly’s breasts, rapper Redman’s cameo, macabre slap-stick comedy, lame jokes and John Waters’ wacky hi-jinks. 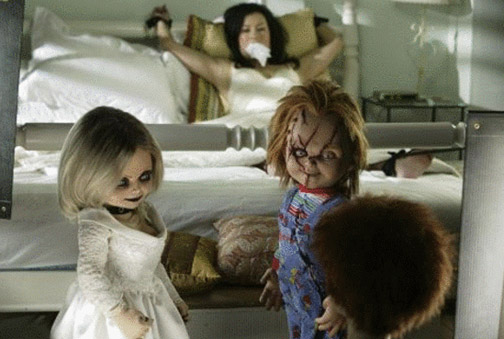 Also there was whatever the hell was going on in this scene.

Looking back, Chucky differed greatly in terms of his character evolution when compared to Freddy, Jason and other horror icons. In the cases of Freddy and Jason, their changes were more organic and logical as the films progressed. However, with Chucky his character’s evolution simply came about because the film’s creators decided it was time to go the comic route. Chucky went from being a pint-sized deadly psycho to a non-threatening, comic parody because (damn it) the script demanded it. Naturally a reboot has been rumored, but as of this writing nothing is set in stone. Ah well, at least we have those first few movies. 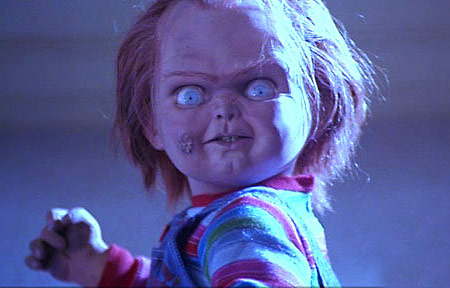 Loved Bride of Chucky? Hated Child’s Play 2? Ready with some demands for our next horror icon breakdown? Post a comment below!