With the completion of the latest season of Showtime’s Dexter, we’re finally safe from the spoiler-police to openly discuss our favorite blood-soaked drama. However, instead of simply ranting about plot inconsistencies or the awkward Dex/Deb love story we figured it’d be interesting to take a look back at the series “big bads” (the villains) and rank them from best to worst. 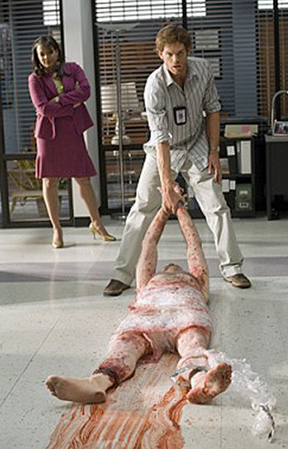 Michael C. Hall approves. Also, somebody clean that up.

The villains in Dexter have been a significant element of the series since the very beginning. The following six malevolent characters and their varied interactions with Dexter often paralleled or were reflective of his dark urges. The “big bads” however took things much farther over the line and were skewed in a murkier direction. Indeed, the villains in the series are every bit as important to Dexter’s growth as a serial killer/vigilante as his regular supporting cast. Final heads up, if you care about revelations and plot-twists but have yet to watch the show then check out Netflix before reading this. For the rest of us who are up to speed… tonight’s the night. 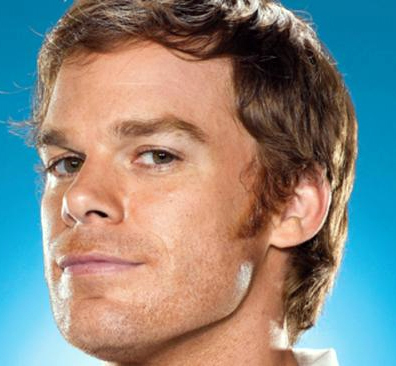 For murder! Or we’ll just fall asleep in front of the computer again, whatever. 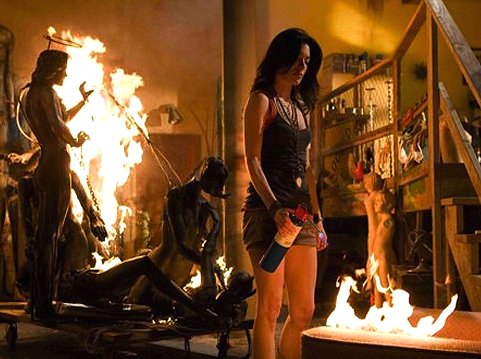 We begin our trip through Dexter’s history of “big bads” with Lila, who was played by Jaime Murray. Putting Lila at this spot on our list isn’t necessarily a slight to her character. Most Dexter fans will acknowledge Lila was a pretty formidable adversary. In fact, her character was reminiscent of Glenn Close’s iconic wacko in Fatal Attraction. Nevertheless, in comparison to the “big bads” that followed and the complete freak that preceded her, Lila was the lesser of the series villains. For what it’s worth, she was the hottest villain on the show.

So how far Lila did go when it came to being a badass chick? Her dirty laundry list was fairly long. Lila was an insanely jealous, overly obsessive schemer. She turned Dexter into an even darker and more manipulative killer, she almost ruined some of his closest relationships, she was a pyromaniac who kidnapped and nearly burned Dexter’s step-children alive… you get the picture. Needless to say the woman had some problems. Still, as previously mentioned, she was hot. Good for you, Dex. 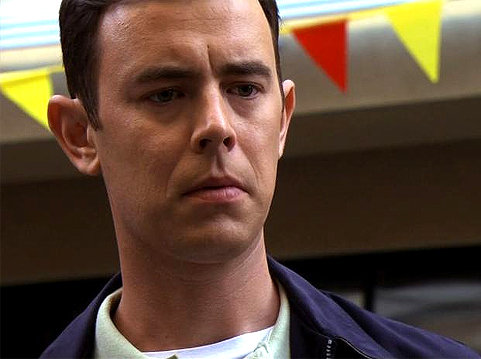 Next on our list is Travis Marshall, a.k.a. the Doomsday Killer, as played by Colin Hanks. Travis’ numerous horrific and over the top murders firmly solidified his “big bad” status. His massacres were based on biblical references from the Book of Revelation. Far from random, his killings were intended as a sick way of honoring God and bringing about the end of the world. Despite that rather immense goal another thing Travis had going for him was his split personality as played by this famous dude… 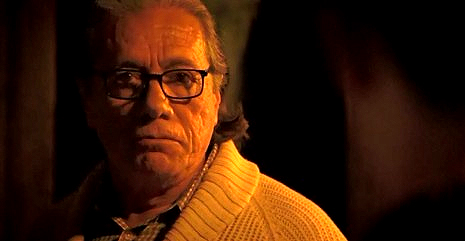 Edward James Olmos cast quite a shadow for an imaginary friend.

Depending how observant you were, the “Gellar twist” was either a huge surprise or an epic disappointment. Those of us who paid attention to the clues (and also saw Fight Club back in 1999) already knew the “twist” was coming early on. Unfortunately, as a result of the drawn out “reveal” the momentum of the season suffered. Also, when the cat was finally let out of the bag, the internet collectively said “I told you so” as opposed to “man I didn’t see that coming!” That aside, another reason Travis is at this end of our list is he was probably less threatening than Lila, the female above him. This is understandable considering Colin is the oldest son of Tom Hanks. Neither Colin nor his pop come to mind when you think of actors who are menacing and intimidating. In fact, they are the exact opposite of menacing and intimidating. The thing is, being able to easily creep out and scare the piss out of viewers is a must for Dexter villains. But that feat is difficult to accomplish with young Hanks subtly reminding us of Woody from Toy Story whenever he’s onscreen. 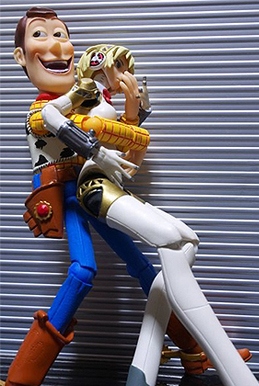 Then again, maybe Woody did have a dark side? 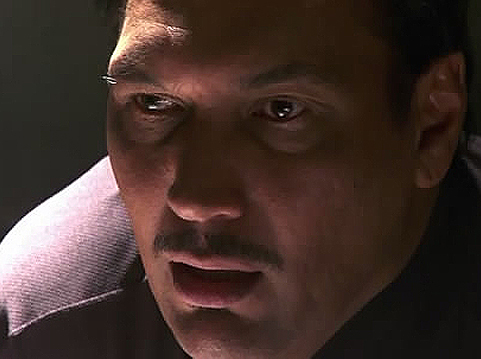 The powerful ADA (Assistant District Attorney) Miguel Prado ranked number four on our list of Dexter “big bads”. Miguel was portrayed by Jimmy Smitts, who has played a lawyer or district attorney so often that this role hardly seemed like a stretch. However, the darker side of Miguel’s character is what made this part very different. 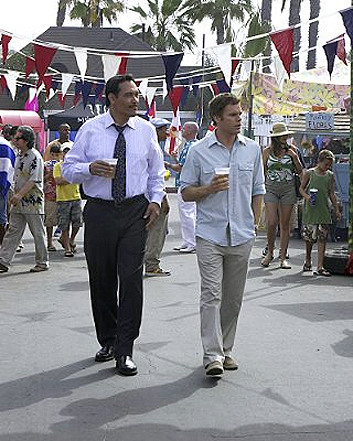 Here we see Dexter and Miguel’s darker sides taking a break to enjoy some brews.

Miguel was an especially memorable antagonist for Dexter. Although he may have been lacking when it came to a sizable body count, he made up for it in other ways. Miguel and Dexter became friends through typical bloody/questionable circumstances. However, their alliance, as well as their desire for personal justice led to Miguel becoming Dexter’s sinister apprentice. Seeing the suit and tie law-man partner up with Dexter in his twisted world and get so close was pretty interesting. In due course Miguel’s apprenticeship deteriorated and Dexter was forced to put an end to his BBQ buddy by day – killer buddy by night. 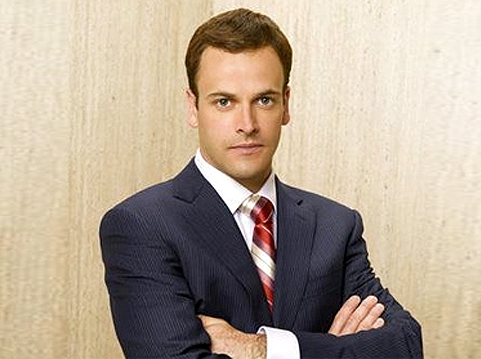 When you think about it, making a fast talking, book shilling motivational speaker into a murderous villain is an inspired idea. Especially these days when so many people have fallen on hard times and have likely found themselves susceptible to such vultures. Jordan Chase as played by Johny Lee Miller was very similar to those dudes you would see on TV at 3AM looking to “fix your life” in 10 easy steps which you can only learn about by buying their book or DVD. 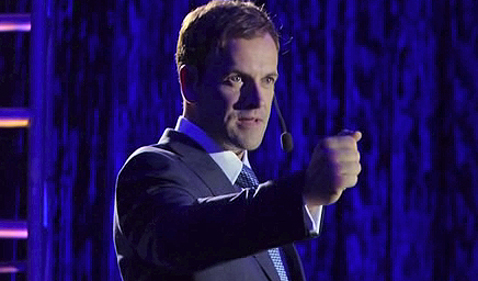 Oh and don’t forget about the seminars. That’s an essential part of the package.

Jordan’s popular “take it!” slogan took on an especially dark implication considering what he did in his spare time. As it turned out Jordan was a founding member of group of men who got their kicks by torturing, raping and killing countless women. People like Jordan are the reason a character like Dexter exists. 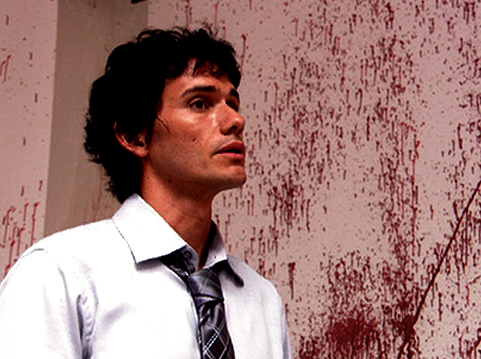 Brian Moser, a.k.a. the Ice Truck Killer was the first “big bad” Dexter encountered in the series. Brian was played by Christian Camargo and was an extremely important character to Dexter. Aside from ITK being a rather nasty serial killer he was also Dexter’s older biological brother. To make things even more awkward around the dinner table Brian had a fling with Debra, the foster-sister of Dexter. 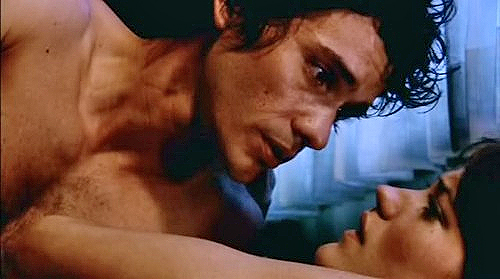 Still not as creepy as the Luke/Leia kiss.

Brian’s serial killer resume included proficiency in killing and dismembering bodies in rather creative manners. One unique factor Dexter praised about his brother’s methods was the careful way in which ITK’s victims were handled, and their complete lack of blood. ITK developed his own trademark method of draining blood from his collection of corpses prior to cutting them up. Doing so allowed the process of dismemberment to be clean. Grisly stuff… but it makes for great television. 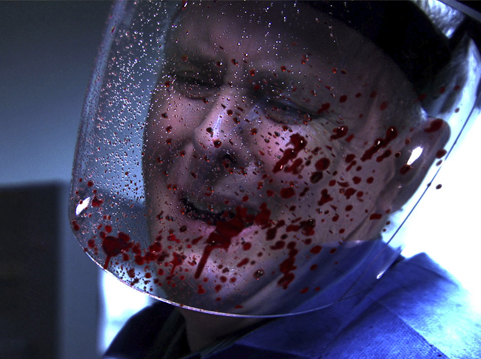 Number one on our list is the Trinity Killer, a choice we know many Dexter fans will agree with. Trinity, a.k.a. Arthur Mitchell was played brilliantly by veteran actor John Lithgow. The Trinity character was so awesome that the shows writers openly admitted they’d never top the performance or match the level of intensity he brought to the series. Lithgow kicked so much ass as the Trinity killer that he even won a Golden Globe and an Emmy for his performance. 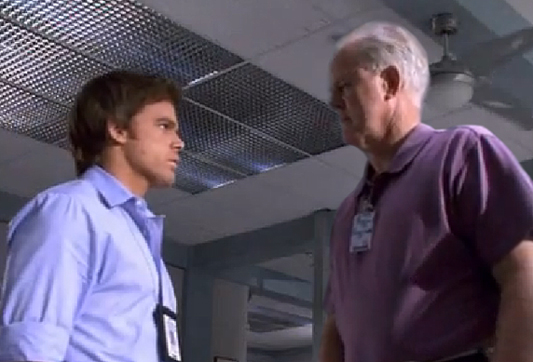 On the surface, Arthur Mitchell was a typical suburbanite family man. Since he’s at the very top of our list obviously he was a lot more than that. Arthur operated for 30 years as the serial killer dubbed Trinity. His namesake came about due to his recurring pattern of three killings. First, he would kill a young female in a bathtub by slicing her femoral. Second he would murder a mother of two by having them fall from a height. His third victim would be a father of two. Trinity repeated this meticulous cycle in different cities throughout the country. Considering Trinity was responsible for completely shaking up Dexter’s life and killing his wife Rita, we figured he earned his spot at the top of our list of monsters. 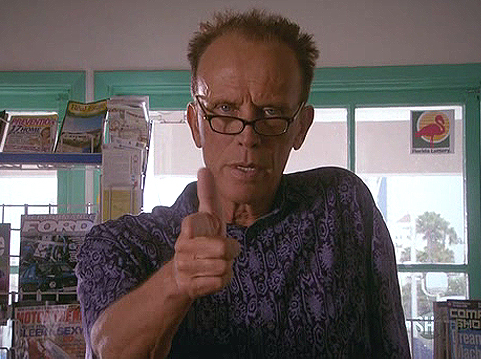 Although he wasn’t officially a “big bad” we wanted to at least give a quick mention to the perpetually slimy Stan Liddy who was played by Robocop’s Peter Weller. This disgraced corrupt narcotics officer was all kinds awesome. We only wish he had stuck around a bit longer as a thorn in Dexter’s side.