Home Home 4 Most Dangerous Parts of the World’s Oceans

We won’t argue that the world’s oceans aren’t beautiful, but we do feel the need to remind you that they are also deadly. What follows are some of the most dangerous areas found at sea.

If you’re ever traveling along the coast of the Red Sea, be sure to check out the Blue Hole, one of the most beautiful diving sites in the world. It’s also one of the deadliest so you know, wear a helmet or something.

The Blue Hole is a cave that’s about one hundred and thirty meters deep with an opening about six meters deep. Lovingly referred to as “diver’s cemetery,” some view the hole as a sort of trap for divers because of how easy it is to miss. A tunnel connecting the cave to open water lies well beneath the recommended diving limit of forty meters. This is particularly dangerous because nitrogen narcosis, which creates a numbed feeling similar to alcohol consumption, regularly occurs at thirty meters and only increases as you go deeper.

But because Mother Nature is a dick, the archway connecting the Blue Hole to open waters isn’t quite what it appears to be. Divers have reported that the odd angle of the opening makes it appear shorter than it actually is. People expecting a quick swim through find themselves swimming against a surprise current from the open water, and several divers have died trying to use the bottom of the tunnel as a reference because they didn’t realize the bottom of the cave runs absurdly deep.

According to Egyptian authorities, the site has only claimed forty lives since they’ve started keeping track, but locals insist that the number is being misreported intentionally.

2. The Rivers of China 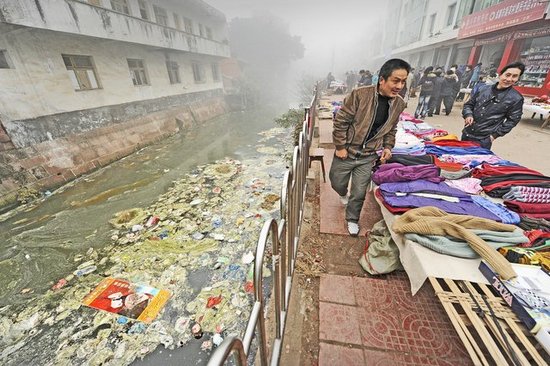 Anyway, China has a major pollution problem, and while this isn’t unusual for an industrial country, the size of China and its numerous factories have created a unique and terrifying problem: their water pollution is the most severe in all of Asia, and it affects their neighbors just as much as it affects them.

All of China’s rivers and lakes are polluted to some level. Most will make you sick, but the more extreme waters are completely absent of fish. A whopping seventy-eight percent of water in the country is not safe for human consumption. More than five-hundred thousand people are estimated to drink contaminated water every single day, but there’s not much they can do about it. Most efforts to fix the problem do little to that effect, leaving people to suffer in cancer villages.

Oh, you don’t know about cancer villages? Let’s rap about that. The effects of drinking contaminated vary depending on pollution. Common problems are chronic illnesses and organ damage. But with many factories dumping poisonous waste into major rivers, cancer has become a major problem. Enter cancer villages, collectives of people unfortunate enough to live near contaminated water. These villages are famously associated with the Huai River where there are said to be over one-hundred such villages. Death rates in cancer villages are thirty-percent higher than the national average.

Antarctica, also known as “that other huge chunk of ice” by those of us who didn’t pay close enough attention in geography class, has its own ocean, though it’s defined space is constantly debated. The Southern Ocean lacks a traditional northern border because rather than meet another landmass it simply meets with other oceans, creating some of the confusion about whether or not it should exist. But one thing is certain: regardless of how you define it, it will kill you.

Ships traveling through these waters are at the mercy of a continuously harsh climate. Icebergs can form at literally any time of year, and areas of meter-thick sea ice are common. When ships take heavy damage from these hazards, it’s pretty much game over. Search and rescue missions are nearly impossible given that the nearest landmass is in freaking Antarctica.

To make matters worse, sailors have noted three locations that are especially dangerous: southern latitudes forty, fifty and sixty are coded “roaring,” “furious” and “shrieking” respectively due to the high winds. What’s more, there’s an increased danger for high waves because there’s literally nothing there to break waves (except for a ship, of course).

Aside from having some of the strongest winds on the planet, cyclonic storms are frequent due to the varying temperatures and the large open waters.

The Indian Ocean makes up about a quarter of the water on the surface of our planet. As the warmest ocean in the world, it’s also ripe for intense tropical storms, especially monsoons and cyclones, which regularly affect surrounding countries as well as India.

However, the storms aren’t the reason why the Indian Ocean made the list. Instead, these waters get the nod because of the rampant pirate activity that takes place there. Pirates from the coast of Somalia have made the waters their home and have caused extensive damage as a result. Shipping industries as well as fisheries are the most impacted financially due to the presence of pirates, but attacks are known to happen on any kind of vessel that strays into Somalia’s coastal waters.

The problem lies in the Somalian civil war, which saw the collapse of both a central government and armed forces. As a part of the following lawlessness, groups took it upon themselves to defend the waters, which have been overfished and polluted by foreign ships for years. Some speculate that early Somali pirates were once fishermen unable to earn a living due to the presence of foreign fisheries.

Regardless of where the original intentions lie, recent pirate activity finds its reasoning in financial gain by taking hostages and demanding massive ransoms. As a result, many countries forbid their ship from getting within a certain distance of Somalia. Most insurance policies become void once the waters have been entered and insurance companies are now charging the shipping industry more money if they operate in the Indian Ocean.

Sadder still, a large portion of Somalia’s population relies on aid that comes through the targeted shipping lanes. In the past few years, it has become much more difficult to deliver the desperately needed aid.