In Ancient times, they sought out ways to cut back on crime. Instead of letting the criminals sit in a jail cell, like today, they would use different torture devices. These devices came in all shapes and sizes and were meant to scare other would-be criminals into not doing the crimes committed by the person being tortured. Let’s check these weird torture methods.

This device was designed in Greece by Perillos of Athens. He was a brass founder and he cast the shape of a hollow bull with a door on the side. This condemned person was shut in the bull. There was a fire lit underneath the device and because it was brass it became yellow hot, which would cause the person to roast to death. It was configured with tubes and stops, so when the person was screaming it would sound like the bull was raging. 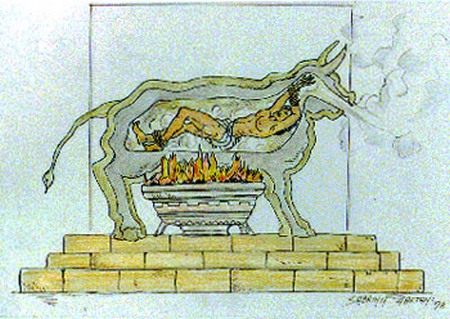 This wheel of torture was used to kill criminals and it did that very slowly. This device was a large wagon wheel. The criminal would be tied to the wheel, where the punisher would proceed to use a hammer to break the bones of the other person. Once that was completed, they were left there to die and even the birds would peck at their flesh until death was complete. 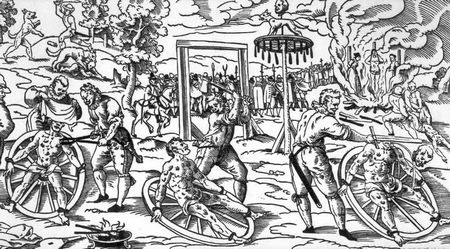 This device is an oblong rectangle with a wooden frame. It was raised from the ground with a roller either at one end or at both ends. One end had a fixed bar, where the feet were locked onto it, and the other end had a moveable bar, where the hands were tied to it. It had a lever that was used as the interrogation progressed. It was on a lever and pulley system that would eventually cause the joints of the person being tortured to dislocate and then separate. Eventually, the muscle fibers user bin, ligaments, and cartilage would break separating the limbs from the body of the condemned. 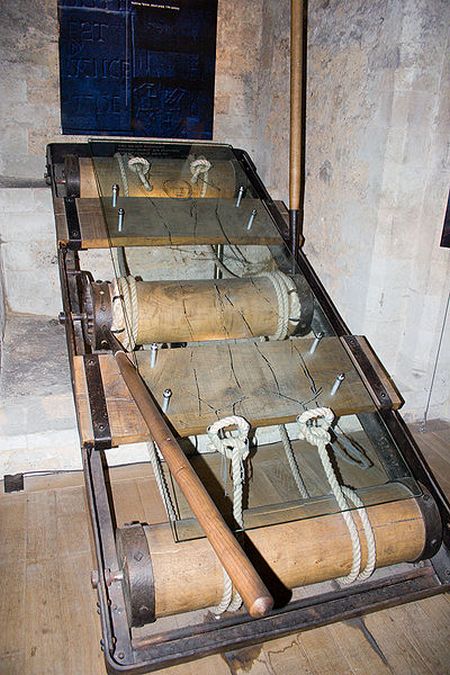 This torture device is a pyramid-shaped seat. The victim is placed on top of it, with the point inserted into an orifice, then they are very slowly lowered onto it. The condemned was usually naked in order to add to their humiliation. This device was thought to stretch the orifice or to slowly impale the person. The stretching of the orifice would cause pain, rips, and tears, which would eventually cause death. 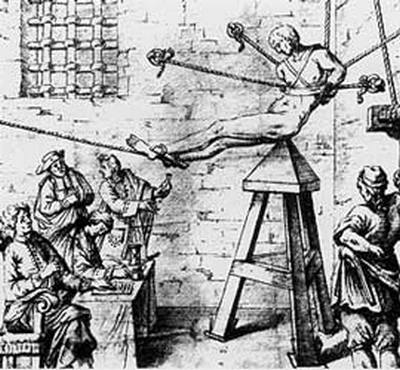 This device was used in the Middle Ages. The condemned would be placed in the metal coffin and left there for the appropriate amount of time. Depending on the crime, the person could be left in there to die, while animals ate their flesh or they would be placed on public display, which would cause their death. The people that would surround the person in the coffin would throw rocks and poke the person with objects until they finally became deceased. 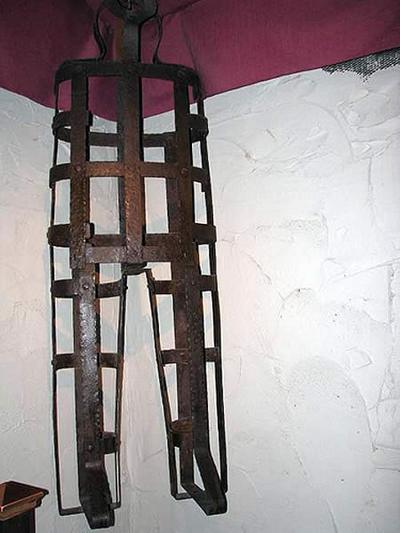 This iron cabinet with a hinged front was made to be a tall upright cabinet that would enclose a human being. It would have a small opening, which was closeable, so the interrogator would be able to open and close it at their will. They would then poke the bodies of the person with a sharp object. They would use knives, spikes, or nails and the person inside was forced to remain standing in one position, ultimately causing their demise. The whole purpose of this device was to make a person’s knees useless. It was used mainly during the Inquisitional period of time. This device was faceted with spikes, from three to twenty of them, and depending on the crime committed, depending on the number used. IT had a handle the torturer would use to close the device. The spikes would mutilate the skin and begin to crush the knee. They would also use the device on elbows, arms and the lower legs. There were even instances that they would heat the device to cause a maximum amount of pain. Death wasn’t a result of this device, but it the person refused to cooperate they would use other means. This device was used during the Spanish Inquisition. It has two forks at opposing ends of a metal rod. One of the forks would be placed under the chin, piercing the skin, and the other end would be piercing the flesh in the upper chest. It didn’t puncture any vital organs, so death would not take place during the use of this method, but it made talking and neck movements impossible. While wearing this device a person’s hands would be tied behind their backs, so they could not escape it. It would harm the person’s neck and, oftentimes, spread diseases. This method was used to torture and kill the condemned person, which were typically accused of witchery, adultery, murder, blasphemy, or theft. The accused was hung upside down. This slowed down the blood loss by forcing the blood to the brain and it humiliated the person. This type of torture could last for several hours. Some of the victims would be cut completely in half, while some would only be cut up to their abdomen in order to prolong their deaths. This was used to get a confession from the offenders. The fingers of the person were placed in the device and crushed by the torturer turning the handle on the top. It could last for a very long time and it was very painful. This was also used to crush a person’s toes. They even made bigger versions of this device used to crush feet, knees, elbows and even heads.