TV comedies have always dared to go where other TV shows fear to tread. They challenge convention in the search for bigger laughs and in doing so can make a bigger mark on our society than any poet, prophet, political activist, musician or self important writer ever could. Here are ten TV shows that have pushed the boundaries of both comedy and taste.

Nobody group loves to mock, slander and belittle their politicians more than the British public and few politicians have ever been so deserving of such treatment as those that governed the United Kingdom back in the 1980s. This was the among the most turbulent decades in British political history and with the miners on strike, massive public spending cuts and record levels of unemployment, politicians had never been so unpopular. So the stage was set for one of the ugliest, most satirical and controversial puppet shows of all time – “Spitting Image.”

“Spitting Image” broke new ground with its grotesque caricatures and was quickly taken into the public’s heart, winning an incredible 10 BAFTA awards. It ran from 1984 to 1996, covering the fall of Margaret Thatcher, the conservative party administration under John Major and the rise of a wide-mouthed new entrant to the political scene, Tony Blair. The show is said to have helped shape the political landscape of Britain, with some of its puppets being more memorable and more recognizable than the people their real-life counterparts.

British politicians weren’t the only ones to receive a kicking from the show. Ronald Reagan was also a favourite, as was George Bush and the monarchy.

Canadian born wierdo, comedian, writer, rapper, actor, talk show host and all round freak of nature Tom Green began his career as a stand-up comedian and radio personality in Ontario, Canada before making the move to Canadian television in 1994. “The Tom Green Show” was basically an opportunity for Green to do whatever he wanted to in the name of entertainment. This usually took the form of candid camera style pranks in which Green pushed the boundaries of taste. Green’s parents were a favourite target: their son filled the family home with farmyard animals and famously had a pr0nographic image painted onto the hood of their car, which he dubbed “the slut-mobile.” The show was picked up by MTV in 1999 and Tom Green achieved international fame. It later was rumoured to have been axed due to the controversy caused by one sketch in particular, in which Green turned up to a Bar Mitzvah dressed as Adolf Hitler. 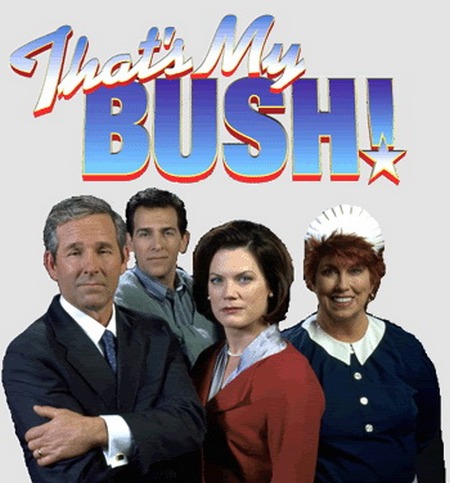 Created by Trey Parker and Matt Stone of “South Park” and “Team America” fame, “That’s My Bush” was often an exercise in bad taste. More a lampoon of classic American sitcoms than anything else, it was set in the Whitehouse and featured a badly caricatured George W Bush. Memorable characters included whacky next-door neighbor Larry O’Shea, Charlton Heston and, in one episode, an aborted foetus with an attitude problem. Dubya even had a trademark catchphrase parodying Jackie Gleason: “one of these days, Laura, I’m gonna’ punch you in the face.” Only one season was ever made. The shows cancellation was blamed on budget constraints.

British comedian Chris Morris first achieved fame through his spoof current affairs show “The Day Today” in which he mixed political satire with outright surrealism. However, it was the short-lived spin-off “Brass Eye” that would secure his place in British TV history. Brass Eye was a series of spoof documentaries designed to poke fun at the way in which British television and popular culture responded to certain issues of the day.

In one famous episode entitled “drugs”, Morris highlighted the reactionary attitude to drugs in the British establishment and media. A fictional drug named “cake” was invented for the purposes of the show and celebrities were asked to take part in a “cake” awareness campaign. The celebrities were suckered in and read the ludicrous details of the drug on camera, stating that it affected an area of the brain called “Shatner’s bassoon” and that it could cause you to cry all the water out of your body or even “puke up your own pelvis bone”. When Member of Parliament David Ames heard about the dangers of the drug he went so far as to raise the issue in session. In this episode Morris was also filmed pretending to inject heroin.

Brass Eye returned to British TV in 2001 for a “Paedophilia Special” in which it was joked that paedophiles were using online computer games to indirectly abuse children. British comedian and actor Simon Pegg (who starred as Scotty in the 2009 film “Star Trek”) also appeared on the show as a member of the militant paedophile organization “Milit-Pede”. The British press were appalled by the show, calling it “unspeakably sick”. 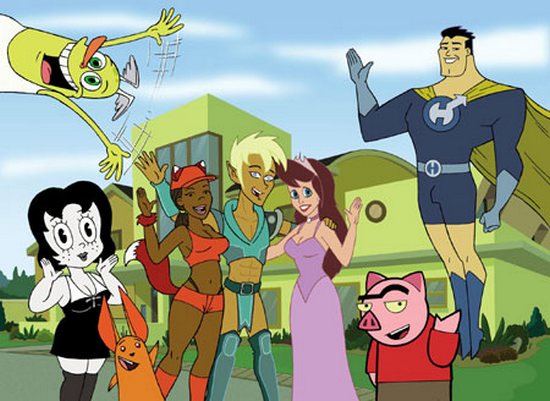 This animated spoof of heavily-edited, American “reality” TV shows follows eight of the most vulgar cartoon characters ever created as they struggle to live together in “the Drawn Together house” without tearing each other to shreds. As with most American reality shows “all scenes have been created for entertainment purposes.”

Despite the show being criticized for its use of violence and sexual content (in particular an inter-racial lesbian love scene involving the racist Princess Clara and African-American Foxxy Love) it ran for an unexpected three seasons on Comedy Central and the “Drawn Together Movie” has recently been released.