Anybody for tubby-custard? How about we just watch TV off each other’s stomachs for a while? Nah, you’re right, it’s all repeats these days. Let’s just spend half an hour laughing at our slurping robotic vacuum cleaner or, better yet, let’s see what Tinky Winkie’s handbag. What a crazy life those Teletubbies live. Created by the BBC, Teletubies is a show about four multicolored aliens whose entire existence is limited to endlessly meandering about a strangely artificial landscape experiencing disturbing hallucinations. All of this to be of continual amusement to the sun god Ra, who watches over them from his fiery throne in the heavens. I’ve always assumed that the tubby-Tronic Superdome (the Teletubbies’ high tech hobbit home) is some kind of alien insane asylum, prison or care home. The Teletubbies themselves are incapable of any form of rational thought but the house provides them with the bare essentials of survival.

They eat bread and gruel, sleep in very small beds but have a decent level of hygiene, which is more than you could expect from an NHS care home. Perhaps whoever bred this group of lobotomized idiots decided that it would be in everybody’s best interests to isolate them from the civilized world. Another theory is that the show’s creators were trying to portray how our over-dependence on technology will eventually cause us to regress to a childlike state of consciousness. The house provides everything they need and so the Teletubby species has no need for intelligent thought, rather like the Eloi in H.G Wells’ classic novel ‘The Time Machine’. However, it’s far more likely that the BBC was simply trying to hypnotize children with a mixture of bright colors and eerie sound effects.

A Jim Henson Company production, The Hoobs appears to be perfectly innocent at first glance, but look a little deeper and you notice some bizarre things. The huge amount of sexual innuendo that creeps into the show for one. The Hoobs is a technologically advanced (if a little stupid) alien species. In the show, they send four of their kin – Tula, Groove, Ivor, and Roma – to Earth to study our planet and make daily reports back to their homeworld. The reports are broadcast on Hoob TV and usually contain innocuous information such as ‘humans wear hats to keep their heads warm’. But are these broadcasts just a cover story? Are Tula, Ivor, and Groove really conducting reconnaissance for an impending Hoob invasion? Is Huba Bubba really the producer of the show or is he the commander of the Hoob battle fleet? And when Hubba Bubba becomes supreme overlord of Earth will we become a slave race like the Motorettes – a bio-mechanoid worker race forced to live in the engine compartment of the Hoob-mobile. 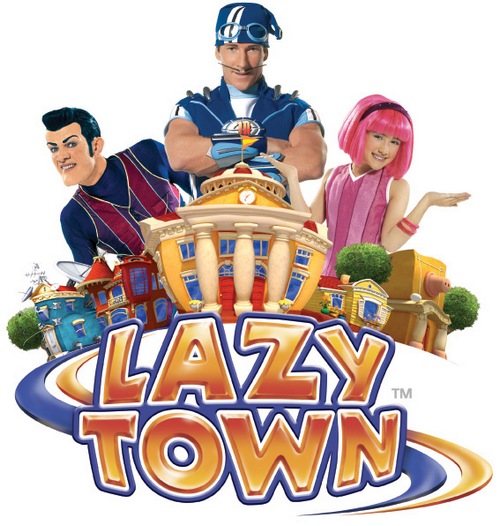 Lazy Town is a small town populated entirely by puppets, with the one exception of Stephanie who is human. However, Stephanie’s uncle – the mayor of Lazy Town – is a puppet, raising certain questions about her parents’ sex life. The people of the town are inherently lazy but Stephanie is determined to change this, with the help of her friend Sporticus – and Hispanic fitness freak who lives in a blimp (also human). Changing the lifestyle of the townsfolk would be much easier were it not for the interference of over-acting Jim Carey wannabe, Robby Rotten.

However, Sporticus always wins the day, causing Stephanie to burst into emphatic song and dance like a member of the 90s gay techno scene. The show is abound with clichés and messages about healthy eating. Sporticus continually encourages the kids to eat ‘sports candy’ (fruit and vegetables). His kryptonite is sugar, which causes him to go into ‘sugar meltdown’. The show’s bright colors and plastic veneer make it impossible to watch without producing ‘vomit candy’.

4. In the Night Garden

The night garden exists only in the mind of a sleeping blue infant wookie. Each night as Iggle Piggle falls asleep on his little rowing boat, all the many creatures of the night garden awaken. Amongst them are Makka Pakka – an obsessive troll who travels the garden cleaning all the stones, the Pontipines – a family of tiny people with eight tiny children, and the Tombliboos – three little weirdoes who live in an Ewok village and love to hug and kiss each other.

Perhaps the strangest thing about the night garden is that even public transport seems to be alive. The Ninky Nonk (a train) and the Pinky Ponk (an airship) both ‘go to sleep’ when the other garden dwellers do. They know it’s time to sleep when the roof of the gazebo in the center of the garden begins to spin.

Is it a bird? Is it a plane? No, it’s a 35-year-old virgin in a plastic costume. Bibleman is the ultimate bible bashing superhero. Actually he’s the only bible bashing superhero. Unlike Superman, Spiderman and other meddling do-gooders, Bibleman doesn’t have any superpowers. He doesn’t need them; all he needs is the love of the lord! Instead, he dispatches his evil foes by incessantly quoting the good book and nagging them to death. When his words fail him, however, Bibleman resorts to using a lightsaber to slay his enemies.

Despite poor production values and a condescending attitude, Bibleman has become surprisingly popular in America (probably more popular with parents than with kids), even spawning a chain of all-singing all-dancing stage shows in which Bibleman’s rapping sidekick, Cypher, and masked cliché, Biblegirl, really come into their own. If you’re interested to learn more about Bibleman, the Bibleman stage shows or the Bibleman videogame, my advice would be to shoot yourself immediately.

The Clangers is a 1970s TV classic, beloved by adults and children alike. The Clanger is seen as a UK icon, with toy Clangers still available in shops today, but the show reached a worldwide audience throughout the 70s and 80s. The Clangers are essentially a family of pink mice who can only communicate by whistling. They live on a small barren moon where their only natural food source is soup – which is either harvested or produced by the Soup Dragon.

Their home consists of a series of burrows cut into the moon’s surface, the entrances to which are covered with dustbin lids. The Clangers is a highly inquisitive species and they spend their time exploring the other planets in their star system, discovering strange life forms such as music plants and, in one episode, and astronaut.

Very few people remember this BBC production from the late 1980s. Most people think that it was a strange dream. If only it were. Greenclaws was a big, fat, slightly camp gardening monster with a penchant for the arts. Greenclaws’ hobbies included music, cookery, and painting but his real passion was gardening, evidenced by the fact that he lived in a giant greenhouse. His secret gardening weapon was a tree with the power to make plants grow really fast. He simply placed a seed inside the tree trunk, which opened like a microwave, and within minutes it would be fully grown. His friend Owlma, a talking mechanical owl alerted him when the plant was ready. Was the mechanical owl really necessary or relevant? Not in the least. 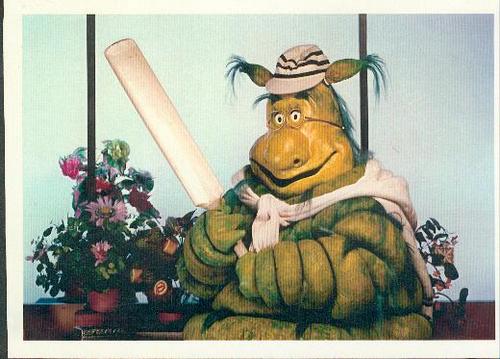 8. Tales of the riverbank

These Canadian kids show featured a cast of real rodents, most famously Hammy the hamster, driving cars, flying airplanes and operating a diving bell. The show first hit TV screens trough 1959-1960 and then again in 1972. A third incarnation of the show (this time in color) was aired from 1995 to 1998. Evidently, Hammy was not one hamster but many. Alongside Hammy, the Hamster was Roderick the Rat (who drove a motorboat) and GP the Guinea Pig (an inventor and pilot). 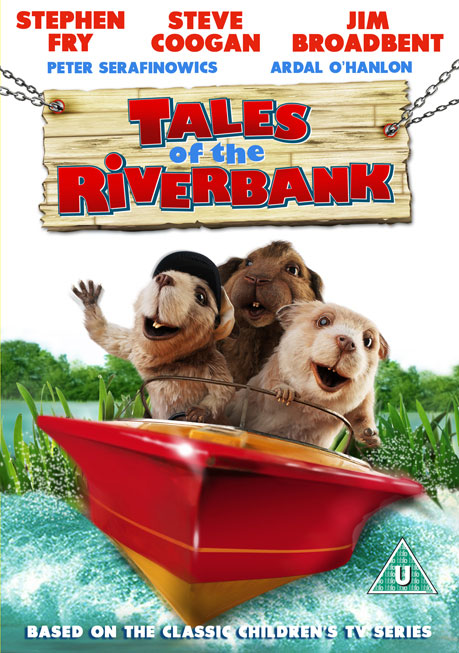 9. Bear in the Big Blue House

Another ingenious creation of the Jim Henson Company. As you might imagine the show is about a bear who lives in a big blue house. Don’t worry, it’s not a real bear but a man in a disturbingly life-like consume. Although being an intimidating 6foot tall, Bear is actually very friendly and a surprisingly good dancer. He has lots of friends, including the moon, and likes to spend his time laughing, singing and shaking his giant booty. This might sound like any other kids show, however, the bear’s dancing is not only hypnotic but somewhat contagious. His incredible footwork has to be seen to be believed.

Anne Wood of Teletubbies fame (if it can be called fame) was responsible for creating this Anglo-American monstrosity. Essentially another brightly colored acid trip into a world where anything is possible (but nothing ever seems to happen), Boobah can be described as both terrifying and hilarious. If you are wondering what a Boobah is, I’m afraid there is no simple answer. They seem to be a species of frankly ridiculous aliens who travel the globe in an organically constructed inter-dimensional craft known as the Boohbah. They are fat and hairy, and their bald heads are protected by a layer of retractable neck skin that is similar in appearance to that of a foreskin. The Boobah, with which the Boobahs seem to have a symbiotic relationship, appears as a single glowing light and is capable of traveling at high speeds. This explains why nobody yet has been able to blast it out of the sky.