BDSM can be divided into three different subcategories: bondage and discipline, submission-domination aka sub-dom, and sadism-masochism. All of these practices can be recognized by a disparity between the preferences of each partner where one likes to be tied up or spanked and the other enjoys tying up or spanking their partner. It is critical to remember that both partners must be informed and consent to all of the behavior and actions that will take place during foreplay and procreation. Some people also identify as “switches”, meaning that they can play the dominant or submissive role based on their inclination with their partner.

Japanese Kinbaku is a form of bondage where the aesthetics of the session are an important factor in the entire session. Kinbaku is Japanese for ‘to bind tightly’ and it translates into a form of the verb. The aesthetics could involve the body being set up in a particular formation or the ropes being organized in a particularly attractive arrangement. The actual aesthetics of the session depends on the consent of the two partners based on the different materials and designs of the ropes.

The dominant partner, it could be either the male or female, is the one who does all the disciplining. They can demand that their partner do mundane activities wearing fetish clothing without the pleasure of doing certain specific things. The disciplining session is often a one-to-one session that is merged with bondage to make the overall experience much more satisfying. This is why the terms bondage and discipline are almost always used together.

A submission/domination session is not always totally sexual and sometimes it might not even be passionate or lustful. It entails one partner controlling the other based on a set sequence of events or series of developments that are preordained before the session and agreed upon by both partners. The dominant individual might ask their partner to go to the grocery store wearing nothing but a raincoat which can be both thrilling and embarrassing for their partner. There are some buzzwords associated with the submission/domination scene and here we do a quick rundown of the most used words.

All of these terms are used to describe the compliant or docile partner who is willing to relinquish responsibility to follow the whims and desires of their partner. This means that the sub will let their partner take charge and decide the fate of the session based on actions that have been approved by both parties in advance. Strange as it may seem, people working in extremely pressurized day jobs where they are always calling the shots, take pleasure in being controlled in this way. It can be because this is the time they can let someone else take leadership of the situation instead of always having to be in control.

Switches are people who can be playing either a sub or dom role as the session plays out. A switch does not mind being a versatile participant in the performance. 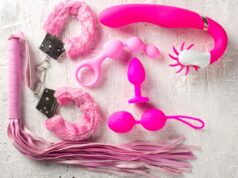 4 Reasons Why Every Male Should Start Using Sex Toys

4 Ways To Tell If Your Sex Toys Are High-Quality