No childhood is complete without a toy that could potentially kill those who wield it. Why part of growing up is learning that Lego bricks are both sharp and incredibly painful to pass through your body. But these toys are a different kind of danger. These traps of plastic… these manufactured facades don’t lie dormant until you think it’s okay to stick one in your mouth. No, these toys are lethal by their very nature. If they haven’t made a serious attempt on your life, then somehow you are using them wrong.

Too often have men been torn between the decision to hold up their pants or to kill a stranger with cold, unloving steel. Thanks to the Bat Masterson Derringer Belt Gun, a ten-year-old can experience the joys of secure Levis and Southern justice in a single package. Children playing with guns has become an accepted part of childhood, so why not make it fashionable to boot?

The weapon on the buckle is a cap gun, meaning there will be no ensuing rush to the emergency room or the need to dig a shallow grave should you thrust your pelvis in the wrong direction. But that doesn’t mean someone wouldn’t get hurt by one of these bad boys. In fact, a safety organization in the United States claimed that the “caps can be ignited by friction and cause serious burns.” On the downside, you’ve just burned your penis, but on the other hand, you just earned the awesome nickname “Hotrod.” Coveted by many but mastered by few, the Bat Masterson Derringer Belt Gun has fallen to the wayside with many other toy weapons of the olden days. 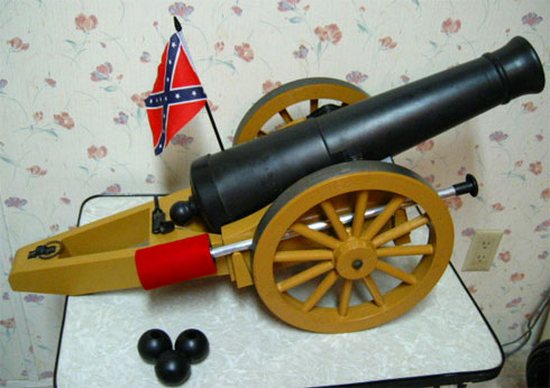 Speaking of terrible ideas, here’s another deadly weapon made harmless made deadly again when it finds its way into the hands of someone who’s yet to hit puberty. Billed as an authentic recreation of a Civil War cannon, this device is thirty inches long and fires plastic cannonballs up to thirty-five feet at the pull of a lanyard, making playtime rebellion so much easier than ever before! Perfect for any child who wants to secede from Lincoln’s America.

There’s a whole laundry list of why the Johnny Reb Cannon was an awful idea, but we’ll try to keep it short. First, the inclusion of a Rebel flag would imply some sort of glorification of the Confederacy, and therefore the continuation of slavery. Terrible ethics aside, what toy would need to fire ammunition up to thirty-five feet away? What game requires that much distance between two children? Is there a Battle of Ticonderoga playset sold separately?

You can write “DO NOT FIRE CANNON AT NEIGHBORHOOD CATS” on the box in letters bigger than the average human skull but we guarantee that was the only thing this was ever used for once Johnny Reb tore through the box like a hurricane of sugar and violence.

Hammocks aren’t for children. Hammocks are for people who are too drunk to find their way back to their bedroom but not so drunk that they wouldn’t mind sleeping in an oversized fishing net. Hammocks are made so people can sleep comfortably outside, but if God wanted you to sleep outside then he wouldn’t let tornadoes happen there. Since their inception, hammocks have long been associated with the fat and lazy by popular culture anyway. Is that really what you want your child to aspire to be like?

Naturally, the Mini-Hammock was a disaster waiting to unfold. In order for them to not end in tragedy, two things had to happen: hammocks need to stop being hammocks or children need to stop being stupid. Sadly, both of these things have yet to happen. By design, hammocks are just ropes tied in a way that can support the weight. In order to not strangle their users like demented serial killers, the ropes are held apart by spreader bars, the same bars that the manufacturer of the Mini-Hammock decided to skip out on during the planning stages. They were ultimately recalled after reports of children getting strangled by the ropes while they were climbing in or out.