Attack of the Giant Colgate Tube

Your first reaction to this ad will be to run to the comments section and call us idiots for showing you something that’s clearly been photoshopped, but we can assure you that this huge Colgate tube attached to an office building is real. 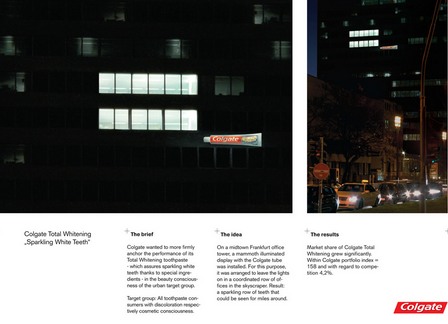 With some of the lights left on the building is supposed to look like it’s smiling at you, although personally we think it looks disinterested in us at best. But regardless, the message is clear: Colgate is the toothpaste of choice for office towers, and if it can keep the teeth they don’t actually have clean then obviously it’s perfect for your mouth too.

Sight and sound are, obviously, the senses that most ads take advantage of. But smell can also be used to promote certain products thanks to the wonders of scratch and sniff, and even touch gets in on the action with, like, carpet samples or whatever. That leaves taste, the slacker sense of the advertising world. However, a company called First Flavor has decided to put that lazy fifth sense to good use with ads you can lick. 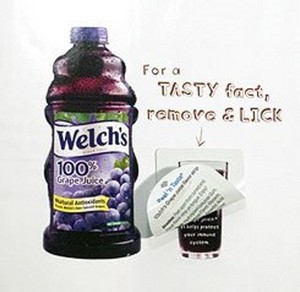 First Flavor makes a variety of flavoured strips (our favourite is the Bacardi rum one), which are primarily used in magazine ads. The strips are single use and designed to be peeled off before being licked, so if you’re waiting around at the doctor’s office and the guy next to you is busy licking magazine pages we wouldn’t recommend asking him what the commercials taste like.

The most effective ads are ones where people have absolutely no choice but to watch. We can change TV channels to avoid a commercial, but if you’re in a movie theatre you’re pretty much forced to sit through the ads, unless you close your eyes and plug your ears with popcorn. A hair salon took this logic a step further by putting their ad on an escalator, which meant that anyone who wanted to go upstairs had to learn about their services. 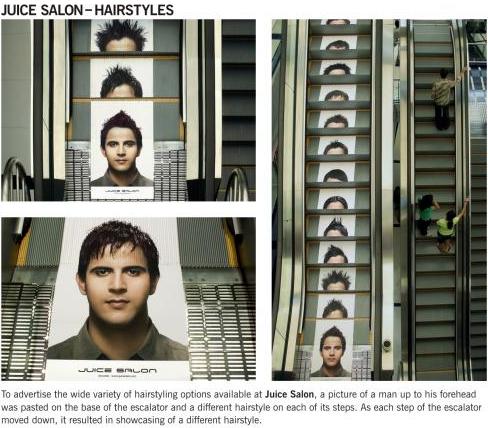 Each step on the escalator displayed a hairstyle that matched up with the face of the man at the bottom, so people were able to see what a bunch of different cuts would look like. As you can tell, styles ranged from “neat and professional” to “incredibly douchey,” so there was something available for everyone.

Advertise by Defacing Other Ads

Coming up with an ad of any kind, let alone a creative one, is hard work. So why bother going through all that effort when you can just slap your brand name onto commercials made by other people? Sure, some downers might call that “unethical,” but the people at Hubba Bubba simply refer to it as “marketing.” 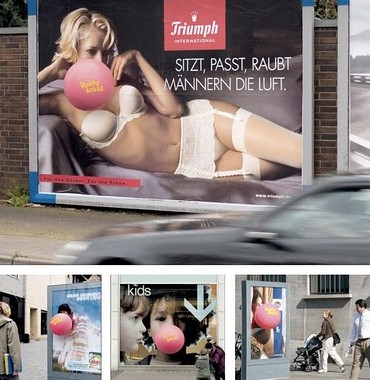 See how easy it is? What used to be a lingerie ad is now a billboard of a hot woman blowing a Hubba Bubba bubble. And all it took was a balloon, some outside the box thinking, and a complete lack of respect for other businesses.

The Ol’ Sanitary Pad in the Sink Trick

Feminine hygiene products are tricky to advertise, because it’s tough to show how effective a certain brand can be without crossing the line of good taste. But at the same time the ads still need to be memorable, and you can only go with the “pour what looks like blue Kool-Aid onto the product in question while cheery music plays” shtick so many times before viewers lose interest. So one company decided to eschew all that subtlety crap and send the bluntest message possible by putting a fake version of their pads in bathroom sinks. 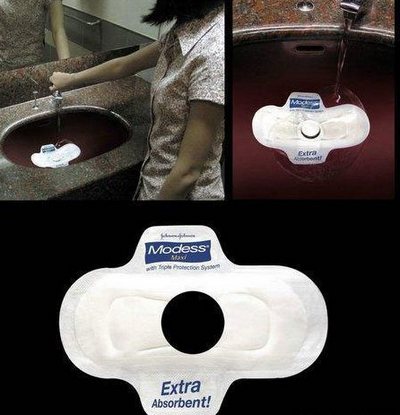 The message is supposed to be “look at how much this can absorb!” although we suspect that the average woman’s first reaction was more along the lines of “gross, who left that in the sink?” But either way, they’d definitely remember the brand name.